The combination of microflow LC with SWATH Acquisition for large scale quantitative proteomics studies is becoming increasingly more widespread, due to the improved robustness and throughput obtained relative to the traditional nanoflow LC approach. Here, the impact of shorter gradient lengths on the number of proteins that can be quantified by SWATH Acquisition using the TripleTOF 6600 system was investigated. Due to the very fast MS/MS acquisition rates possible on TripleTOF systems, high numbers of peptides/proteins can be quantified with very fast gradients. For example, with the Pan Human Library on a 1ug load of HEK lysate, ~2100 and ~3400 proteins were quantified using SWATH with the 5 and 10 min gradients respectively. 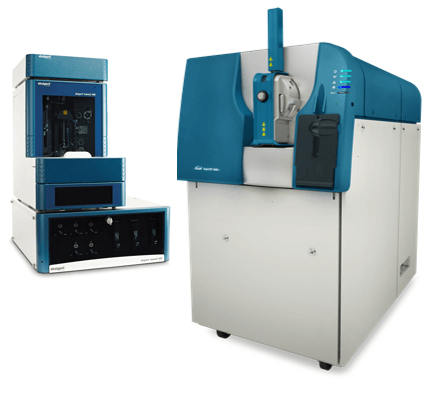 Testing on multiple instruments with different complex matrices, it was observed that the number of proteins quantified using SWATH Acquisition for the fastest gradients was over 1300 proteins for multiple complex matrices from 1 µg protein load (Figure 4).  When combined with larger ion libraries, over 2100 proteins were identified and quantified in a 5 min gradient from a complex HEK digest (1 µg, Figure 1). The combination of microflow LC with the high MS/MS acquisition rates of the TripleTOF® 6600 System enables high-throughput yet comprehensive analysis for proteomics samples, at rates approaching 100 samples per day.

Chromatography: A NanoLC™ 425 System plumbed for microflow chromatography (5 µL/min) was used and operated in trap/elute mode. Column temperature was controlled at 30°C. Gradients of 5, 10, 20, or 45 minutes were tested (Table 1). More information on LC configuration can be found in the SWATH Performance Kit SOP.4 Note the wash and equilibration steps were not optimized, further reductions in run time may be achievable.

Mass spectrometry: All data was acquired using a TripleTOF® 6600 System with the Turbo V™ Source equipped with the 25 µm hybrid electrodes for microflow LC. SWATH Acquisition data were collected using a variety of acquisition strategies using variable Q1 windows. The TOF MS scan was 150 msec and the # of Q1 windows/cycle and accumulation time was varied. Use of collision energy spread (CES - short CE ramp around optimized values) was investigated in combination with optimized collision energies5.

A series of optimization experiments were performed to test the best acquisition conditions for running DIA experiments under accelerated chromatographic conditions. As faster gradients produce taller sharper LC peaks, cycle times need to be considered for best quantitation results, therefore the number of Q1 windows per cycle and accumulation time were adjusted.

Figure 2 shows a few examples of the parameter optimization ramps that were performed. Increasing the number of MS/MS per cycle provided significant improvements in the number of IDs. The accumulation time per MS/MS was also decreased to maintain cycle time and it was found that very fast acquisition rates (accumulation times down to 15 msec) provided results improvements. This optimization was performed for each gradient length. The XIC window width with for the shorter gradients was also varied (1 – 4 min for the 10 min gradient) and there was minimal impact on proteins quantified (data not shown).

Optimized collision energy values for peptides5 were used, and for the very low accumulation times, CES) was turned off. This was found to have minimal impact on results quality (Table 2).

Figure 2. Parameter optimization for fast gradients.  A variety of parameters were varied and the impact on # of proteins (blue) and peptides (orange) quantified was assessed. The results for the HEK cell lysate (1 µg) using the 10 minute gradient is shown for instrument 1. Increasing the # of Q1 windows used per cycle with faster accumulation times provided increased specificity for these compressed gradients and thus provided gains in quantified proteins and peptides.

To understand if shorter gradients have an impact on protein quantitation results when using larger libraries, the Pan Human Library8 was used to process the HEK data obtained off instrument 3 (with both PepCalMix and iRT peptides dosed in). The same data was also processed with the SWATH Performance Kit SOP library4 for comparison. At each gradient length, significant gains in proteins quantified was observed, on average over 30% more proteins were quantified with the larger library (Figure 3). Even larger gains were observed in the number of peptides quantified using the larger Pan Human Library, on average over 75% more peptides were quantified with the larger library at each gradient length (data not shown).

Figure 3. Gains observed when using larger Pan Human Library (PHL) across gradients. This plot represents the same data as in Figure 1 but plotted in terms of % increase for proteins (blue) and peptides (orange) quantified. The larger library provided on average more than 30% more proteins and 70% more peptides across the different gradient lengths.

Using a protein load of 1 µg and the optimized SWATH Acquisition methods (Table 3), a final dataset was collected across 3 different TripleTOF 6600 Systems on different matrices (Figure 4). For the faster gradients, accumulation times of 15 msec were used for MS/MS, providing 66 Hz acquisition rates. This high speed MS/MS acquisition allowed a maximal # of Q1 windows to be used to provide higher specificity as the separation was compressed.

Similar numbers of peptides were detected between the 3 instruments on the different matrices (Figure 4, bottom) and typically only a 50% loss in # of peptides quantified between 45 min and 5 min gradient was observed. As expected, the number of proteins quantified across matrices varied (Figure 4, top), however similar to what was observed with the number of peptides quantified, 50% of proteins were still quantified using the 5 min gradient, suggesting this is a compelling strategy for fast interrogation of proteomics samples.

Figure 4. Proteins and peptides quantified from SWATH Acquisition Data. Results from the various gradient lengths for the different matrices on the 3 different TripleTOF 6600 Systems tested are plotted, proteins (top) and peptides (bottom). Protein load for all data is 1 µg.

Understanding the impact of gradient length on proteins quantified will provide researchers workflow options depending on the sample complexity and the size of the study (# of samples to be run) when performing microflow SWATH Acquisition studies. Here, the impact of very fast LC gradients on proteins and peptides quantified reproducibly and with high confidence was explored on multiple systems.