Switch from nanoflow LC to microflow LC in minutes

OptiFlow™ Interface together with the nanoLC™ 425 System enables switching between LC-MS workflows in minutes, providing equivalent performance to the original nanoDCI interface on the TripleTOF 6600 system. 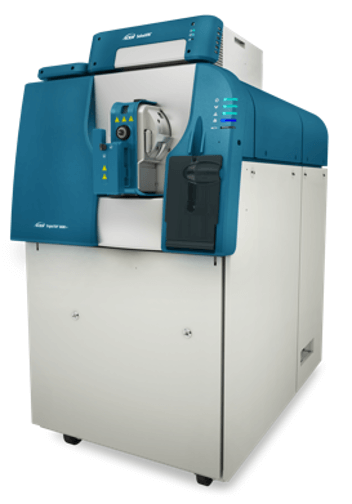 In a busy Omics research lab or MS core facility, there are often a diverse range of projects to run during a single week. Therefore, the ability to easily switch between LC-MS workflows can help improve productivity. For routine projects where ample material is available, it is often useful to use microflow LC to analyze samples with accelerated throughput. This can free up time to spend on more complex, higher sensitivity projects that require nanoflow LC.

OptiFlow™ Interface together with the nanoLC™ 425 System enables switching between LC-MS workflows in minutes, enhancing overall system productivity. After removing the nanoflow source (either the OptiFlow® Source in nano mode or the NanoSpray® Source), the nanoflow curtain plate and heater can be quickly removed from the universal interface plate (Figure 1). Then the high flow curtain plate and a higher flow rate source (either the Turbo V™ Source or the OptiFlow Source in micro mode) can be mounted. Since the interface plate stays in place, there is no vacuum break required, allowing the switch to higher flow applications to be performed in minutes.

Key features for the OptiFlow Interface

Equivalent or better performance on OptiFlow Interface vs nanoDCI interface

First, the PepCalMix was run by nanoflow LC-MS at two different concentrations on the multiple interfaces for comparison. The peptide areas from the OptiFlow Interfaces were compared to the signal obtained from the nanoDCI interface (Figure 2) and the ratios were found to be equivalent or greater than 1, indicating equivalence or better performance. This was observed at both the higher (20 fmol) and lower (20 amol) loadings on column.  Three replicate injections were performed for each tests and similar %CV were also observed. When the ratios were compared for the individual peptides (Figure 2, top), very similar performance patterns were observed across the peptide properties and retention times.

SWATH Acquisition tests were also performed using a complex cell lysate digest, this time comparing two OptiFlow Interfaces to the nanoDCI interface on a single TripleTOF 6600 System. Similar peptide area distributions were observed across the replicates of the 3 tests (Figure 3, top), measuring over 10000 peptides. This similarity in peptide areas resulted in similar numbers of peptides and proteins quantified at a <1%FDR and <20% CV across the three tests (Figure 3, table). Also the cumulative CV curves were compared and in all 3 tests, ~90% of the peptide/protein data had reproducibility of better than 20%CV across the replicates performed, confirming both the performance and the robustness of the SWATH Acquisition workflow with the OptiFlow Interface.

Figure 3. SWATH Acquisition performance testing across multiple OptiFlow Interfaces. Using the SWATH Performance kit, the quantitative performance of two OptiFlow Interfaces was compared to the original nanoDCI interface on a single TripleTOF 6600 System. Similar peptide area distributions were measured on the 3 interfaces (top) resulting in very similar # of proteins and peptides were quantified in all three tests (Table).

OptiFlow Interface together with the nanoLC 425 System enables switching between LC-MS workflows in minutes, enhancing system productivity for the busy research lab. Results here outline some of the validation work that was performed to confirm the performance of the OptiFlow Interface was equivalent or better than the original nanoDCI interface. For a simple peptide mixture or a complex digested cell lysate, similar peptide signal intensity was observed between the different interfaces when tested on the same TripleTOF 6600 System.