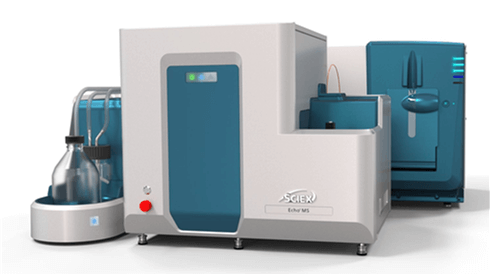 Analysis of biological samples to assess the pharmacokinetic (PK) properties of drug candidates is a cornerstone assay that is routinely performed in virtually all pharmaceutical companies. Despite the importance of PK information in drug discovery and development, bioanalytical data is time consuming data to produce. Many individual time points must be analyzed, often from multiple subjects, to generate data for a single compound. When considering the time required to prepare samples, even just using a simple protein precipitation, in addition to 1 to 2 minute individual sample analysis times in the quickest cases, data is generally not available until the day after the bioanalyst begins work on a study.

The SCIEX Echo® MS System, which uses Acoustic Droplet Ejection technology and an Open Port Interface (OPI) coupled to the high-sensitivity SCIEX Triple Quad™ 6500+ System, is capable of dramatically reducing analysis time, as well as reducing the need for sample preparation.1 This allows PK study data to be available the day samples are prepared, giving researchers faster access to this  important data (Figure 1).

Selection of the most appropriate sample preparation method is always a balance of required sensitivity, necessary throughput and the cost of consumables like SPE cartridges. For bioanalytical assays where sensitivity requirements are easily met, faster analysis and simpler sample prep lead to a more efficient overall process. Here, very simple sample preparation techniques were explored in combination with the SCIEX Echo® MS System for rapid generation of routine bioanalysis studies.

Figure 1. Complete pharmacokinetic study in plasma in under 5 minutes. A calibration curve of fentanyl in untreated plasma was generated across 16 different concentrations with 5x replicates at each point in under 5 minutes

10 µL of working standard and 10 µL of internal standard was added to 200 µL of K2EDTA Sprague-Dawley rat plasma (Bioreclamation IVT). Identical calibrations were also prepared in 0.1% and 0.01% by volume PEG400 (Sigma) in rat plasma.

Protein precipitation: 100 µL of prepared plasma was transferred to a conical bottom 96 well plate. 100 µL of methanol was added to each standard, the plate was covered and mixed gently on an orbital plate shaker for 5 mins. The plate was centrifuged at 4000 rpm for 10 mins to settle the precipitate. 60 µL of supernatant was transferred to an Echo 384 well plate (Beckman Life Sciences 384PP 2.0 Microplate) for analysis.

1:1 dilution: 30 µL of the prepared plasma samples was transferred to an Echo 384-well plate. 30 µL of water was added to the samples, and the plate was gently mixed on an orbital shaker for 5 mins.

Prior to analysis, the final sample plates were centrifuged at 3000 rpm to remove any bubbles in the wells, and then briefly mixed on an orbital shaker to ensure formation of a stable meniscus in each sample well.

Mass spectrometry: MRM data was collected in positive polarity using the Echo MS System using the parameters outlined in Table 1. Key ion source parameters are outlined in Table 2. Note that the value for GS1 value is 90 for this assay, this value is required to be higher than usual because the GS1, or nebulizing gas flow, is what provides the aspirating force that pulls the carrier solvent from the OPI into the ion source.

Figure 2 shows a droplet ladder experiment run using a standard from the protein precipitation calibration. In Figure 2, a linear signal increase is observed for 1 through 5 droplets, with the response leveling off between 8 and 9 droplets. 8 droplets was chosen for this matrix type.

Data processing: Once acquisition of a batch is complete, a file splitting algorithm automatically runs which creates individual files within the acquired .wiff2 file that can be processed in SCIEX OS Software Analytics module. In high-throughput environments, where calculations are done by a LIMS or other software, peak areas can automatically be generated if a Processing Method is specified in the batch. For this example, the data is processed the same as standard bioanalytical data in Analytics.

Three different sample preparation methods were explored, to characterize the impact of matrix complexity on the quality of data generated. The concentration curves for fentanyl were generated in each and the lower limits of quantification (LLOQ), linearity and reproducibility were determined. Figure 3 shows an example curve for fentanyl in untreated plasma. Blanks were performed before the lowest concentrations ejections to confirm the LLOQs (Figure 4). Overall, the best performance was observed for the data obtained from the untreated plasma.

Figure 4. Signal for fentanyl at lower limit of quantification. Blank samples followed by standard ejections of the fentanyl in untreated plasma at a concentration of 0.2 ng/mL, demonstrating good signal at the LLOQ

Table 4. Reproducibility of the calibration curves in each sample preparation strategy. The %CV for n=5 reps for each calibration level was calculated, with the majority being below 5% across the concentrations.

* Standard was lost during transfer

BLOQ Standard was below the limit of quantitation

Average accuracy for all replicates across the concentration curves was between 85 and 115% of nominal for all preparation methods. The reproducibility at all concentration levels for each sample preparation technique is listed in Table 4. It is worth noting that for all three preparations, there was not a significant difference in either assay sensitivity or variability.

In addition to sensitivity, reproducibility and linearity, the effect of potential matrix suppression was also investigated by analyzing standards prepared in plasma fortified with PEG400, which were treated as quality controls when the data was processed. PEG400 is a common formulation agent used in pharmaceutical research that can have significant suppressive effects in electrospray mass spectrometry. Stable labeled internal standards generally compensate for ionization suppression, as long as the analyte is present at a level high enough above the lower limit of quantification to still be measurable. In research PK work, labeled internal standards are not always available, so chemically similar compounds are often selected for use. Even when chemically similar, ionization suppression does not always effect analytes and internal standards equally, especially if they are chromatographically resolved. In this case norfentanyl, which is a metabolite of fentanyl, was used as an IS and there is no chromatography to consider. The effects of different levels of PEG400 in untreated plasma can be seen in Table 5 at the 102.4 ng/mL level as an example. The deviation from nominal at other concentrations was very similar to the 102.4 level for the two PEG400 levels.

The goal of this study was to assess the feasibility of the Echo MS System for routine, early stage bioanalytical quantification. Three plasma sample preparation techniques were explored to evaluate the effect minimal sample preparation would have on the quality of data produced. The approaches used in this project show minimal difference for dilution, basic protein precipitation and simply analyzing plasma directly without any treatment at all.

For routine analysis, where the assay sensitivity requirements demonstrated here are sufficient, the speed and simplicity of analysis using the Echo MS System offers an attractive approach for high turnaround bioanalytical laboratories.

In future work, the use of more thorough preparation techniques such as SPE, will be explored for the impact on sensitivity. In addition, the use of labeled internal standards will also be explored to further improve the data quality.