Differential mobility spectrometry (DMS) separates pairs of mono- and di-sialylated glycan isomers. A more negative compensation voltage was observed for the α2,3 linkage vs the α2,6 form. Use of chemical modifiers with DMS key to achieve full separation for analysis by mass spectrometry. Protein glycosylation is one of the most common and yet most complex post-translational modifications, displaying diversity both in site occupancy and in glycan structure. Sialic acids are typically found at the outermost ends of glycan chains, and have important function in many physiological and pathological processes, including pathogen binding and regulation of the immune response.1 In human cells, the linkage position of a sialic acid to a glycan side chain can be α2,3 or α2,6 to a galactose residue, α2,6 to a N-acetylgalactosamine (GalNAc) residue, or α2,8 to another sialic acid residue.2,3 The linkage configuration has important consequences for biological function, for example, upregulation of α2,3 linked sialic acid is associated with metastasis progression in certain cancers.4,5 For the development of biopharmaceuticals, characterization of sialylation is essential for determination of function and efficacy.6

Differential mobility spectrometry (DMS) has been used for the separation of isomeric species in a number of recent studies.7-9 The tuning of parameters such as separation voltage, compensation voltage, temperature and the presence of chemical modifiers, can allow the transmission of a particular species whilst others are lost to the electrode walls.

This study explores the selectivity of DMS for the resolution of isobaric glycan species containing α2,3- and α2,6-linked sialic acid. The ability to separate glycans based on this linkage was demonstrated with both small glycans (Figure 3) and large glycans (Figure 1). 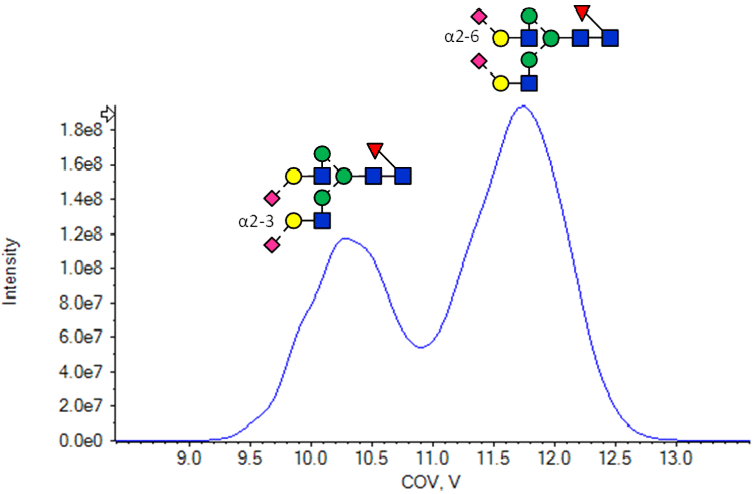 Key features of SelexION® Technology for Separation of Isomeric Glycans

DMS-MS conditions: The SelexION® Device (SCIEX) was mounted in the atmospheric region between the sampling orifice and IonDrive™ Turbo V source of a QTRAP 6500+ System (Figure 2). The temperature of the DMS cell was maintained at 150 ºC, and the nitrogen curtain gas was operated at 30 psi. Methanol was added into the nitrogen curtain gas flow at 1.5% (mole ratio) as the chemical modifier. Separation voltage (SV) and compensation voltage (CoV) were scanned during continuous infusion of glycan solution at 5 µL/min. Either MRM or linear ion trap MS/MS data of the target glycan(s) was recorded at each increment of SV and CoV. 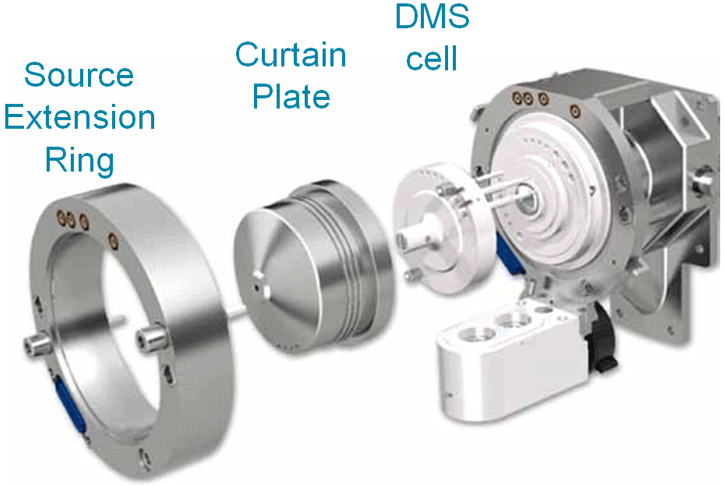 Figure 2. Configuration of the SelexION® Differential Mobility Spectrometry Device on a QTRAP® System. The SelexION® Device cell is mounted in the atmospheric region between the source and sampling orifice, allowing it to be installed in minutes.

Separation of glycans based on sialic acid linkage

DMS-MS was employed for the analysis of deprotonated molecular ions of α2,3 and α2,6 sialic acid linked isobaric glycan pairs, in the presence of methanol chemical modifier. The controlled addition of methanol vapour in the DMS cell induces different shifts in optimal CoV for the individual isomers, enhancing the separation of the isomeric glycans.

Figure 3 shows DMS separation of two sets of α2,3- and α2,6-linked sialic acid trisaccharide glycan pairs. While significant differences can be observed in the MS/MS spectra of the α2,3 and α2,6 isomers (Figure 4), it is the DMS separation that enhances these differences (e.g., an α2,6 isomer-specific fragment at m/z 30610).  Without DMS, a convoluted MS/MS spectrum could complicate identification. 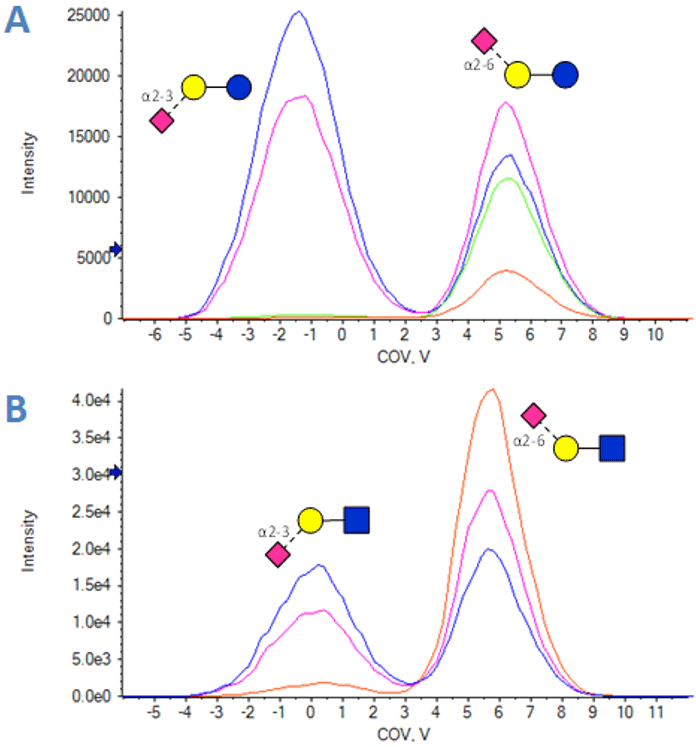 Figure 3. SelexION® Technology can separate isomeric glycans based on sialic acid linkage.  Isomeric separation of deprotonated sialylated glycans   Neu5Aca2-3Galb1-4Glc & Neu5Aca2-6Galb1-4Glc (A), and Neu5Acα2-3Galβ1-4GlcNAc & Neu5Acα2-6Galβ1-4GlcNAc (B) with DMS-MS. Methanol was used as the chemical modifier for the DMS analysis; separation voltage was set to 4500 V. 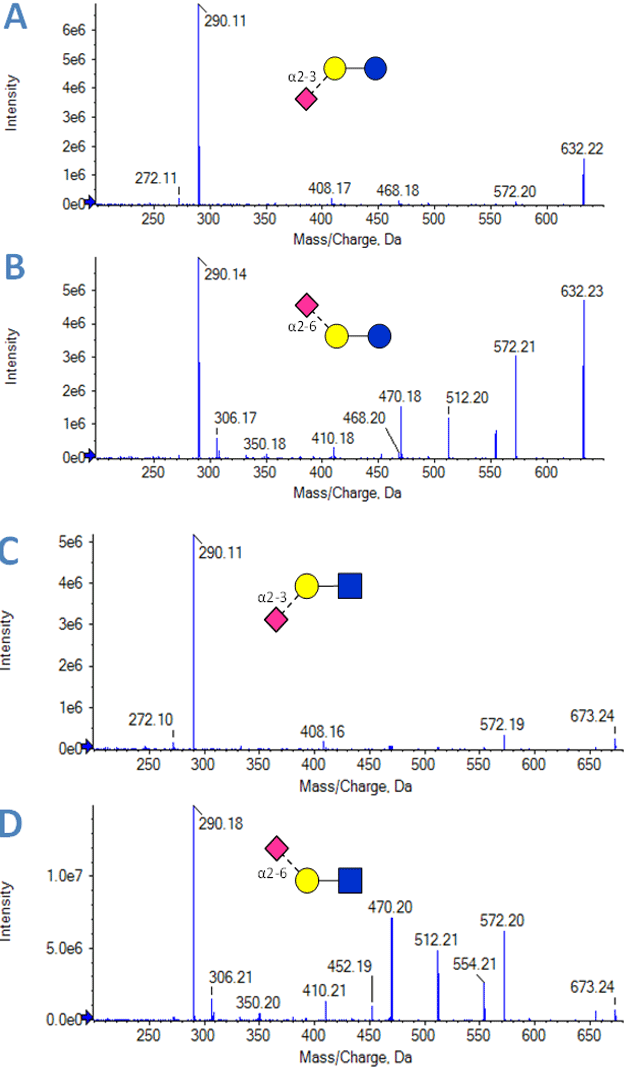 Following successful differentiation of sialic acid linkage in two small glycan pairs, the behaviour of a pair of much larger di-sialylated biantennary glycans was attempted (Figure 1). Corresponding MS/MS data are shown in Figure 5. In addition to the 0,4A2-CO2 fragment ion at m/z 306, the prominent B3 ion at m/z 655 in the MS/MS spectrum of the α2,6 glycan is also thought to be diagnostic for this linkage.10 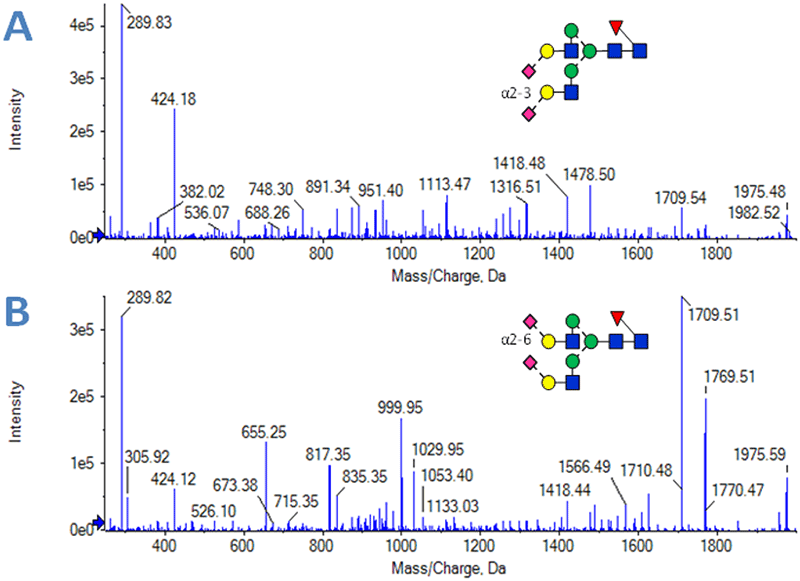 In this study, differential mobility spectrometry (DMS) was used to analyze pairs of mono- and di-sialylated glycan isomers. With the addition of methanol chemical modifier to the DMS, the α2,3 sialylated isomer was successfully separated from the α2,6 form in all three isomer pairs studied, in spite of the varying sizes of the glycans. In addition, a more negative CoV was consistently observed for the α2,3 form than for the α2,6 form. Recent studies have examined the use of other ion mobility technology for differentiation of α2,3 from α2,6 sialylation.14-16 Separation of the trisaccharide isomer pairs shown in Figures 1 and 3 was demonstrated by Guttman and Lee14 and Hinneburg et al15; Barroso et al achieved only partial separation of the non-fucosylated version of the isomer pair shown in Figures 1 and 5.16 However, other ion mobility technology was not shown to distinguish the large fucosylated glycan pair that was successfully separated here using differential mobility spectrometry (e.g., it was unable to resolve the analogous Neu5Gc glycan pair).16 Given the promise shown by DMS for this application, the use of SelexION® Technology for the separation of a large range of differentially sialylated glycan forms warrants further investigation. Such a method would be invaluable in research into the biological function of these important glycan components, as well as in the characterization of biopharmaceuticals.