The IκB kinase (IKK) pathway is important in tumourigenesis and is known to be mis-regulated in a number of cancers including breast cancers. IKK is primarily known for its central role in the activation of NF-κB, which may contribute to tumourigenesis through regulation of the cell cycle and evasion of apoptotic signals. In this research study, the effect of a specific IKK inhibitor, IMD0354, on the T47D breast cancer cell line was investigated. T47D cells are an ER+ breast cancer cell line with an intact IKK signaling pathway (Figure 1). 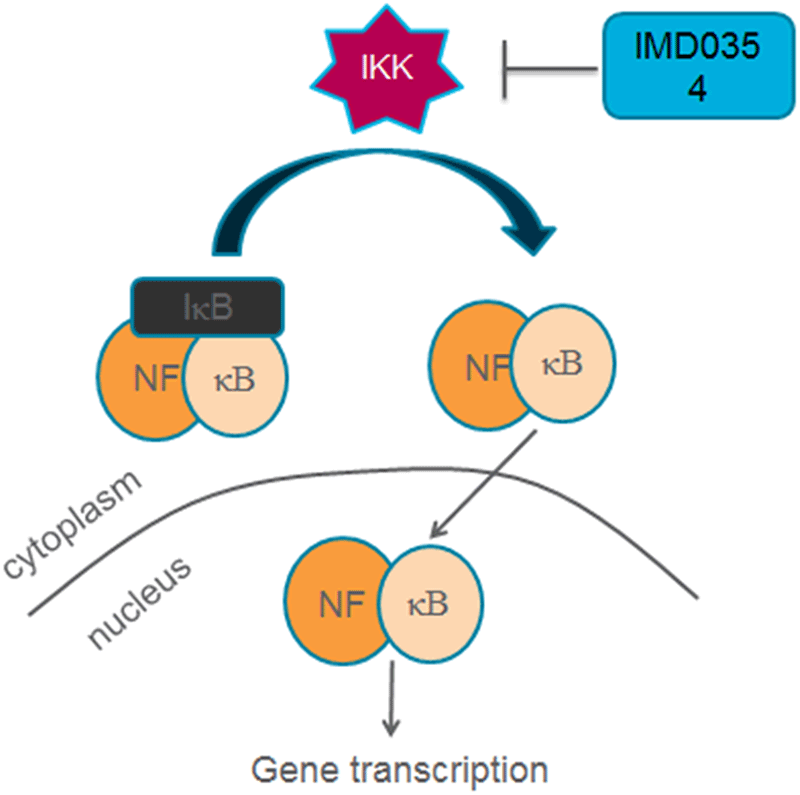 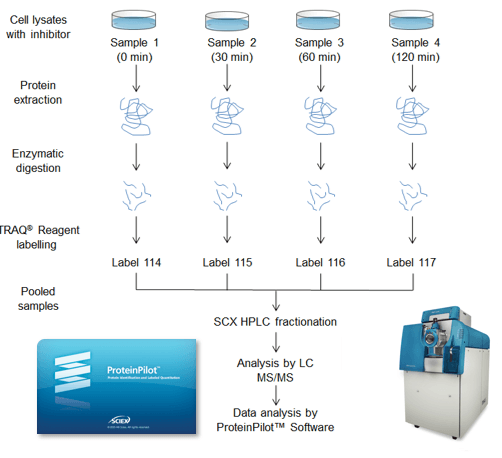 Sample preparation: T47D breast cancer cells grown in DMEM + 10% serum, were treated with IMD0354 for 30min, 60min, 120min. Cells were lysed in 20mM HEPES, pH 7.5, 150mM NaCl, 0.15% SDS, 1mM EDTA/EGTA on ice for 15 mins with scrapping. Lysate was cleared by centrifugation for 5 min at   800 g and supernatant collected. The lysate was briefly sonicated to shear DNA, then returned to ice. Protein quantitation was determined by amino acid analysis. A total of 100 µg of the lysate was reduced and alkylated with 5 mM tris-(2-carboxyethyl)phosphine and 10 mm methyl methanethiosulfonate (MMTS) respectively, followed by tryptic digestion overnight. The tryptic peptides were lyophilized and resuspended in 30 µL of 0.5 M triethylammonium bicarbonate. The samples were then used for labeling with iTRAQ Reagent 4-plex, and combined at equal ratios.

iTRAQ Reagent labeled peptides were fractionated by strong cation exchange chromatography. Peptides were redissolved in loading buffer (5 mM phosphate, 25% acetonitrile, pH 2.7) and loaded onto the SCX column (Polysulfoethyl A 100 mm x 2.1 mm, 5um, 200Å column). The peptides were eluted with the addition of 350 mM KCl. The collected fractions were lyophilized and redissolved in buffer (0.1% TFA, 2% acetonitrile) prior to nanoflow LC-MS/MS.

Chromatography: iTRAQ Reagent labeled fractions were analyzed on a SCIEX TripleTOF System coupled to a nanoflow LC system. 10 µL of samples were loaded onto a reverse phase peptide trap and desalted at a flow rate of 5 µL per minutes for 10 minutes. After desalting, peptides were separated using a C18 column (300 Å, 3 µm, 150 µm × 10 cm). Peptides were eluted from the column at a flow rate of 600 nL/min using a linear gradient from a 2 – 35% mobile phase B in 99 minutes (mobile phase A is 0.1% formic acid and mobile phase B is 90% acetonitrile and 0.1% formic acid).

Mass spectrometry: The LC eluent was analyzed using a NanoSpray® III Source on the TripleTOF 5600 System. Samples were analyzed using a nebulizing gas of 16; a curtain gas of 20; an ionization voltage of 2500 V and heater interface temperature of 150 °C. The TripleTOF 5600 System operated in information dependent acquisition (IDA) mode made use of a TOF/MS survey scan (400-1200 m/z) with an accumulation time of 250 msec. A maximum of ten precursor ions per cycle were selected for fragmentation with each MS/MS spectrum accumulated for 200 msec (100 – 1500 m/z) with a total cycle time of approximately 2.3 seconds. The MS/MS spectra were acquired in high sensitivity mode with rolling collision energy and iTRAQ Reagent collision energy adjustment on.

A strong attribute of the TripleTOF 5600 System is the rapid acquisition of large numbers of high quality MS/MS spectra. The combination of offline SCX fractionation and the high frequency MS/MS data acquisition on the TripleTOF 5600 System afforded the identification of 15,581 peptides and 2547 proteins at a 1% global FDR, determined using the ProteinPilot Report. Peptides were identified across 3 orders of dynamic range based on MS intensity, with a RMS error of 1.17 ppm.

Figure 3 illustrates an MS/MS spectrum obtained for the labeled peptide DELADEIANSSGK from Myosin-9 with m/z 546.28. Operating in high sensitivity mode, the resolution observed for the 114 reporter ion was 19,200. The acquisition of high resolution MS/MS data adds certainty to protein identification, and provides reliable quantitation of the reporter ions. Median signal of the reporter ions was around 1000 cps, providing good ion statistics for quantitation. 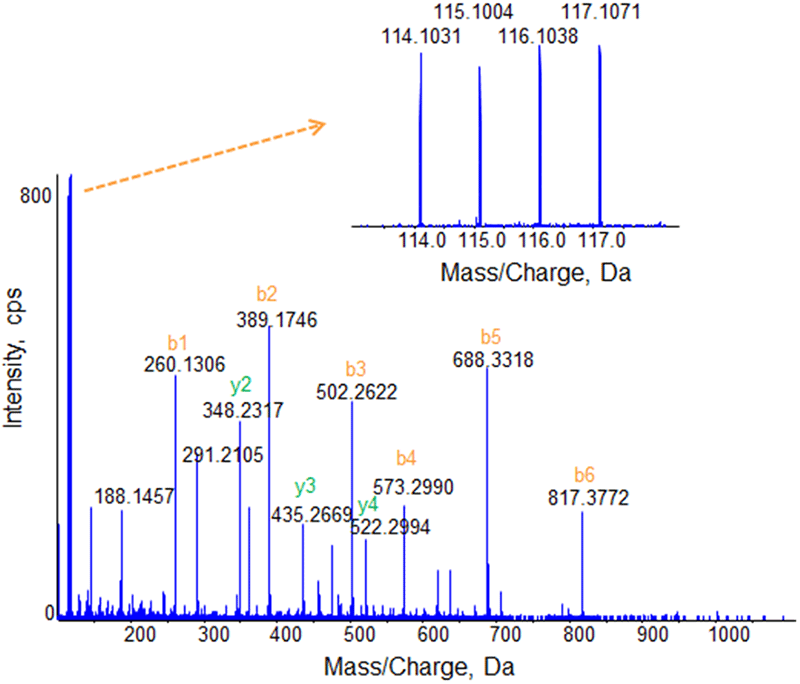 Quantitation measurements for each peptide are combined to provide a protein level ratio, where multiple peptide measurements per protein provider higher confidence in the protein ratio.

Figure 4 illustrates an assessment of the effects of the IKK inhibitor IMD0354 on the breast cancer cell line T47D following 30 minute drug treatment. The Volcano plot shows fold-changes (log ratio) determined for each protein against statistical significance (-log of p-value). The red-line illustrates where p = 0.05. The two blue-lines illustrate fold-changes of 0.83 (left blue line) and 1.2 (right blue-line). In total, 36 and 65 proteins were significantly up- or down-regulated, respectively following IMD0354 treatment. 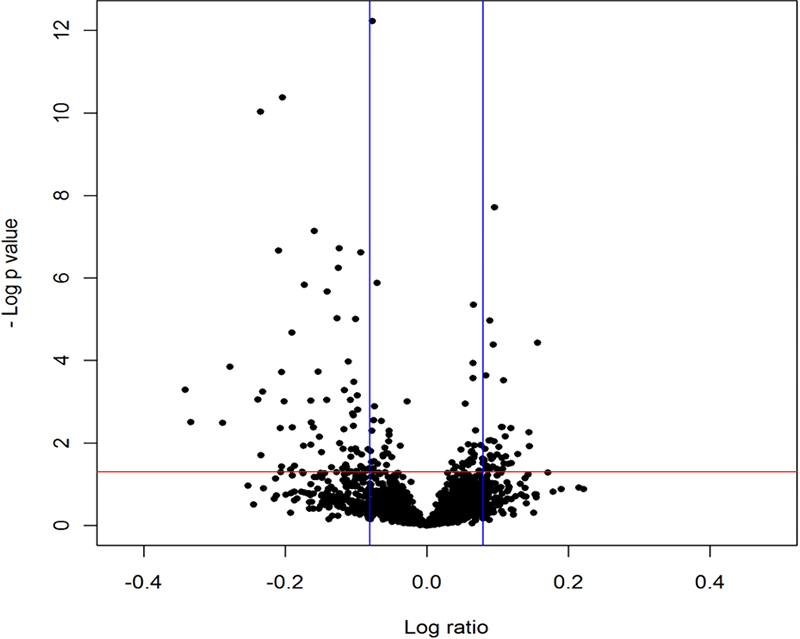 Figure 4. Volcano plot identifying differentially expressed proteins after 30 minutes IMD0354 treatment. The red-line shows where p-value = 0.05 with points above the line having p < 0.05 and points below the line having p > 0.05. The two blue-lines indicate ratios of iTRAQ Reagent labelled proteins of 0.83 and 1.2 (left blue-line and right blue-line respectively). 36 proteins were up-regulated while 65 proteins were reduced following drug treatment.

To examine the dynamic response to IKK inhibition, the measured protein expression levels across the time points were visualized by hierarchical clustering. Evidence for induction and repression of protein levels were observed (Figure 5).

Figure 7 shows that NF-κB pathway inhibition also leads to alterations in the core histone proteins. Three core histone proteins (H2.A1, H2 and H4) are significantly reduced at 30 minutes post treatment with IMD0354. The levels of all three are then seen to recover by 60mins with Histone H4 being significantly increased at 60mins. All three however follow the same trend. Additionally the histone deacetylase complex subunit SAP18 is also seen to be altered following the same trend. This suggests that inhibition of IKK may affect chromatin remodeling within the cell. 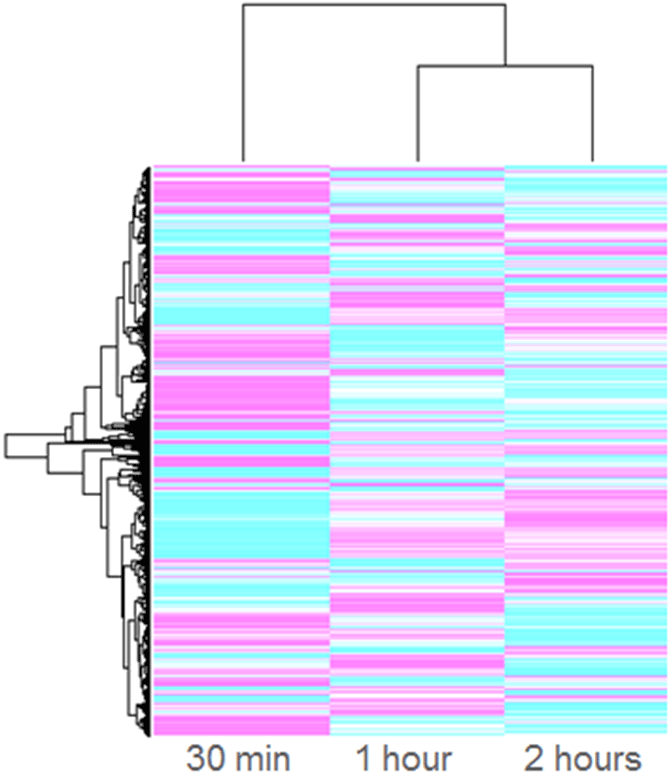 Figure 5. Time dependent changes in protein expression. The heat map of protein ratios relative to the Time 0 point are shown, violet indicates up-regulation and aqua indicates down-regulation. The protein changes are induced in cells after treatment with an inhibitor and are monitored at 30min, 1 hour and 2 hours (reporter ions 115, 116, and 117 respectively). 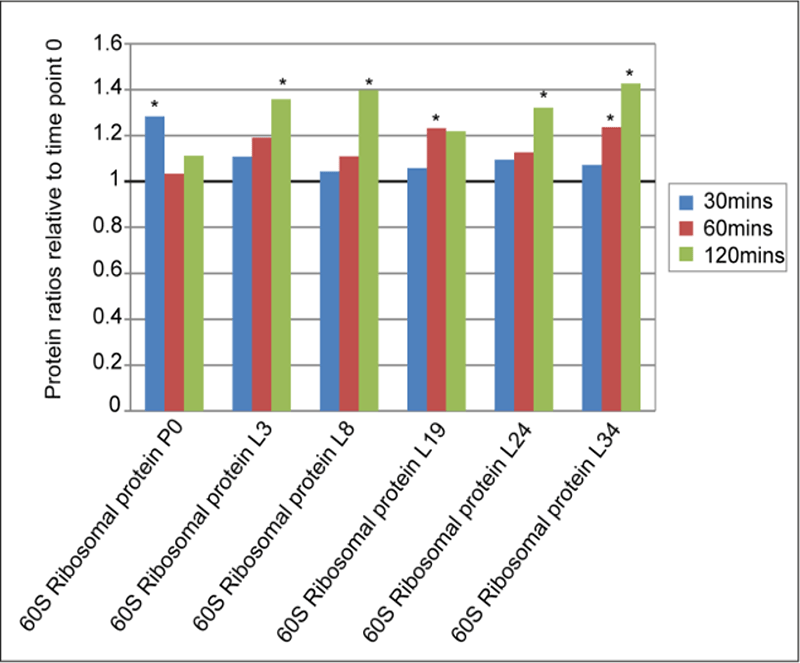 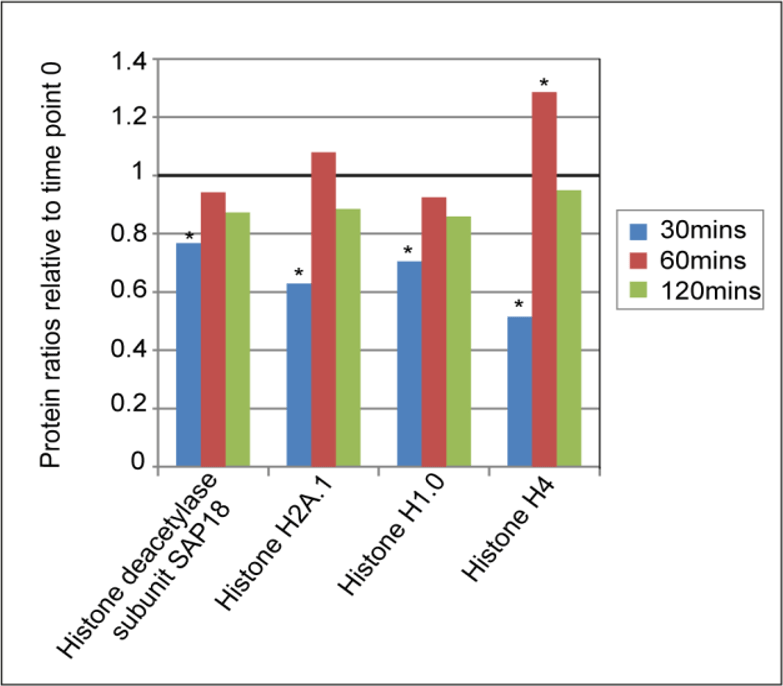 The differentially expressed proteins from each of the time points were combined and Ingenuity Pathway Analysis software used to detect significantly regulated biological pathways (Figure 8).  Nine pathway categories were ranked as significantly over-represented (p≤0.05, left y-axis) as seen by the blue bars equal to or above the yellow threshold line. From this analysis it was clear that energy metabolism was dys-regulated, evidenced by changes to proteins characterized as controlling oxidative phosphorylation and regulating mitochondrial dysfunction. Proteins involved in mTOR signaling, p70S6K signaling, granzyme signaling and protein synthesis (eIFs) were also over-represented in the dataset suggesting that IKK regulates protein expression of these pathways.

As another measure of confidence in the experiment, it is useful to understand the percent of the known pathway that is found to be differentially expressed and over-represented in the dataset. This is denoted by the yellow squares in Figure 8 (right y-axis). For granzyme B signaling, ~13% of known proteins in this pathway were found to be differentially expressed due to IKK inhibition, while other pathways that contain more allocated proteins where less well represented in this experiment. 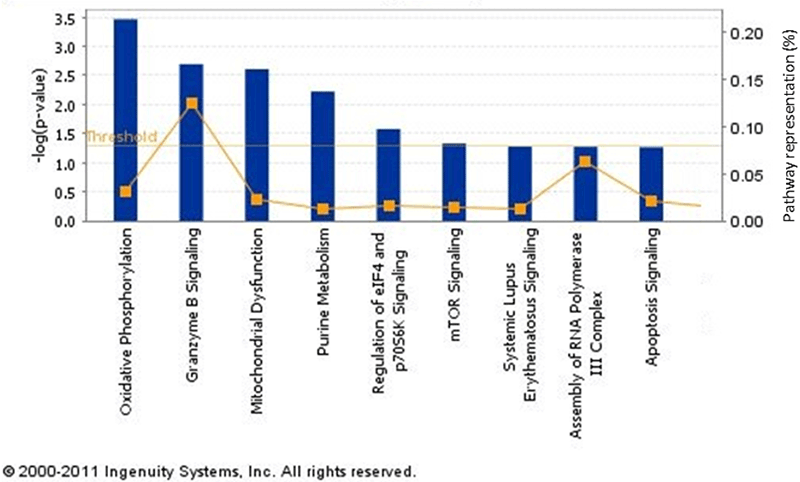 Figure 8. Differentially expressed pathways involved in IKK inhibition in T47D breast cancer cells as determined by Ingenuity Pathway Analysis software. Dys-regulated pathways are shown in blue with the bar height indicating the significance of differential expression for proteins within that specific pathway (-log(p-value) on left y-axis).  Using a threshold of p<0.05 as indicated by the yellow line, nine broad pathways were shown to be significantly regulated by IKK inhibition. Orange squares denote the ratio of detected differentially expressed proteins divided by the total number of proteins known to be involved in the pathway category (right y-axis).