This paper describes the use of single quadrupole and triple quadrupole Mass Spectrometry coupled to Liquid Chromatography for the analysis of 17 pesticides in drinking water and soil samples. Both detection technologies are compared with respect to selectivity, sensitivity, identification, linear range, accuracy, and reproducibility for quantitative analysis.

Quadrupoles are mass analyzers which consist of four rods with DC and RF voltages applied. An ion of a specific mass-to-charge ratio (m/z) will be stable and can pass through the quadrupole only when a specific DC/RF voltage combination is applied. Quadrupoles are therefore called mass filters.

Quadrupoles can be used in scanning or filtering mode. During a mass scan, DC and RF voltages are ramped resulting in the acquisition of full scan mass spectra. Such spectra are typically used for qualitative data analysis. However, scanning a quadrupole suffers from low sensitivity and slow scan speed.

The most selective mode to use a single quadrupole MS is called Selected Ion Monitoring (SIM). Hereby, a fixed set of DC and RF voltages is applied to the quadrupole and thus only a single m/z can pass. Ions with different m/z are filtered out.

Multiple Reaction Monitoring (MRM) is the most common mode of using a triple quadrupole MS/MS for quantitative analysis, allowing enhanced sensitivity and selectivity. The first quadrupole filters a specific precursor ion of interest. Ions generated in the ion source having a different m/z can not pass Q1. The collision cell is optimized to produce a characteristic product ion by collision of the precursor ion with a neutral collision gas, such as nitrogen. This process is called Collision Induced Dissociation (CID). Generated product ions are transferred into the third quadrupole where only a specific m/z is allowed to pass. All other product ions are filtered out in Q3.

Thus MRM mode works like a double mass filter which drastically reduces noise and increases selectivity. The principle and resulting chromatograms of various scan modes analyzing a mix of pesticides spiked into soil is given in Figure 2. It illustrates how increasing selectivity of the mass spectrometric experiment reduces the noise of eluting background and matrix components.

* Not enough HPLC separation to differentiate these in-source fragment ions

MS and MS/MS detection was performed using an API 3200™ LC/MS/MS system with Turbo V™ source and an Electrospray ionization probe. All pesticides were detected in positive polarity using an ionization voltage of 5000V. The ion source temperature was set to 500°C. The detected quantifier and qualifier ions are listed in Table 1. A dwell time of 25 ms was used to detect 34 MRM transitions and 15ms to detect 68 SIM.

Detection on a triple quadrupole MS/MS results in higher selectivity due to the double mass filtering (Figure 3). In MRM typically a single signal per analyte is detected while SIM can result in multiple signals per compound. The reason for this is the generation of identical in-source fragment ions of pesticides of the same compound class. Thus more time consuming HPLC is required to separate such compounds to allow quantitation and identification. Needed HPLC development and analysis times are then comparable to traditional UV detection.

Detection on a MS/MS system also results in better sensitivity. Detected Signal-to-Noise (S/N) is higher resulting in lower Limits of Quantitation (LOQ). The typical difference in sensitivity observed is at least one order of magnitude as illustrated in Figure 4. 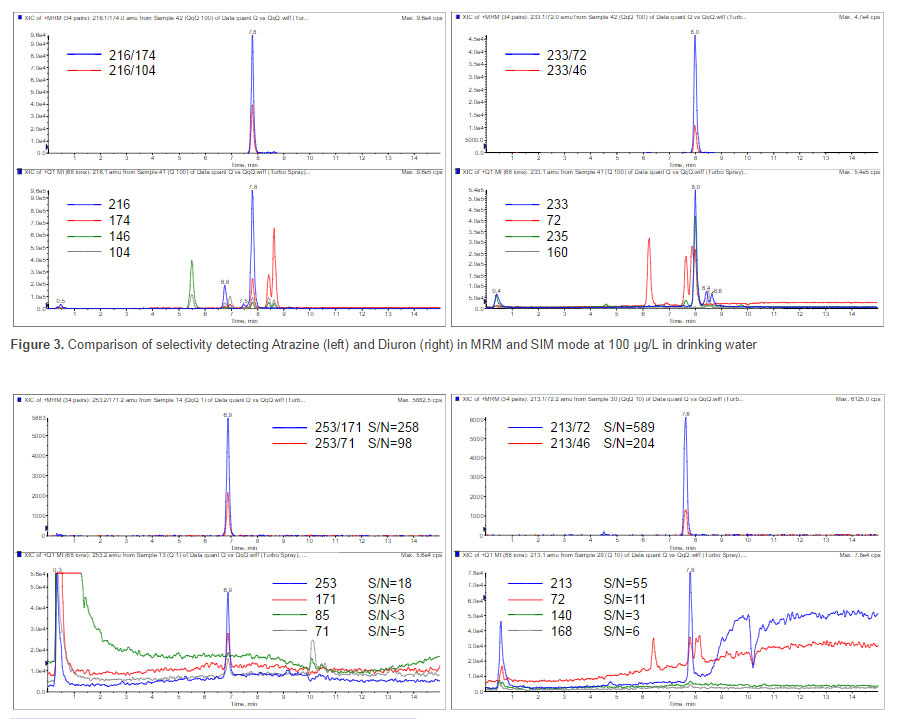 If identification with 4 identification points is required and more than a single ion has to be detected the difference in LOQ based on quantifier MRM and SIM is significantly higher (Table 2).

Generally a wider linear range can be used for quantitation if a triple quadrupole MS/MS is used because of increased selectivity allowing detection at lower LOQ (Figure 5). The upper limit of quantitation of SIM and MRM is typically comparable due to saturation of the ion source or detector. The typical linear range in MRM using Electrospray Ionization is 3 to 4 orders of magnitude while SIM provides only 2 to 3 orders of magnitude.

Table 2. Limits of Quantitation (LOQ) and Limit of Identification (LOI) of detected pesticides*

Table 3. Reproducibility (%CV) of detected pesticides in MRM and SIM at different concentrations

Fewer ions have to be detected per compound on MS/MS in comparison to MS for confirmatory analysis. The concept of identification points introduced by the EU Commission Decision requires the detection of 2 MRM transitions and 4 SIM, respectively. If identification is required the detected qualifier signals have to be compared to specify LOQ. The difference between both technologies can be then at least two orders of magnitude. Finally, a wider linear range, higher accuracy, and reproducibility can be obtained on triple quadrupole MS/MS.

You have added a user.

You have created and added a user.

Unfortunately the serial number you provided shows as inactive in our database. Would you like to submit the case anyway?

This serial number could not be found.  Would you like to submit the case anyway?

Your attachment has been successfully deleted.

A verification link has been sent to your email.

Your insturment has been removed.

Thank you for your rating
Your password is set.
File must be less than 20MB
You must be logged in.
Invalid token - please reload the page and retry.
This email is already associated with this instrument
Could not find request
Could not validate the key against any instrument requests

Unfortunately the serial number you provided shows as inactive in our database. Please open a support case here if you require more assistance.