Amphetamine and methamphetamine are psycho-stimulant drugs of the phenethylamine and amphetamine class of psychoactive drugs. Both compounds occur in two enantiomers, dextrorotary and levorotary.

The l-methamphetamine has less activity towards the central nervous system and is often used in nasal decongestant pharmaceutical preparations that are sold over-the-counter (OTC) and is therefore legal. Levomethamphetamine is also a metabolite of various drugs, for example selegiline which is used for treatment of Parkinson’s and dementia.

(±)-Amphetamine, marketed as Benzedrine, has traditionally been used for the treatment of asthma and congestion. The d-enantiomer is pharmacologically more active and

d-amphetamine, marketed as Dexedrine, is used as treatment for narcolepsy and as a diet pill. Adderall is a blend of d and l- enantiomers of amphetamine used for the treatment of attention deficit-hyperactivity disorder (ADHD). Due to widespread abuse, amphetamine was made a Schedule II drug in the USA.

Amphetamine was first synthesized in 18871 and is a semi- synthetic form of ephedrine. Ephedrine is a natural product from Ephedra sinica and extracts are traditionally used for the treatment for asthma, hay fever and colds. (±)-Ephedrine and its diastereomer (±)-pseudoephedrine are the primary interfering compounds in an analysis of amphetamine and methamphetamine. This is made more significant by the fact that pseudoephedrine (Sudafed) is found in OTC formulations and supplements.

Chiral analysis in drug detection has become increasingly important over the past decade. Traditional screening methods for the detection of amphetamines include immunoassays and GC-MS. 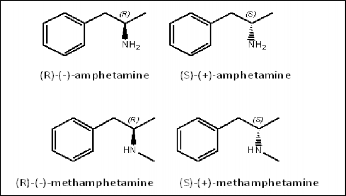 Immunoassays that have been designed to cross react with one or the other enantiomer often have problems with cross reactivity with the wrong enantiomer. GC-MS has a few disadvantages when compared to other analytical techniques. One being the extra step required in the sample preparation involving derivitization of the analytes, commonly using 1-(trifluoroacetyl)- L-prolyl chloride (L-TPC). The purity of such derivitization reagents is often not 100 %, leading to result bias. LC-MS/MS utilization in forensic toxicology screening for drugs and metabolites has become increasingly popular due to the selectivity, sensitivity and speed of LC-MS/MS. For the analysis of the amphetamines, LC-MS/MS eliminates the need to derivitize and allows direct, 100 % detection. Mass spectrometry alone, however, cannot distinguish between stereoisomers, since it characterizes compounds solely in terms of mass.

Separations are required up front of the mass spectrometer. Diastereomers were traditionally separated by cellulose or cyclodextrin-based normal phase chromatography, which were not always compatible with electrospray ionization (ESI). In the last several years a new generation of LC phases were developed that can be used in more ESI- compatible reversed phase chromatography. Enantiomers however require a chiral column. Chiral columns have a single enantiomer of a chiral compound bonded to a solid support and in this chiral environment two enantiomers have a different affinity to the stationary phase and can be successfully separated. Here we present a chiral LC-MS analysis that uses a macrocyclic

glycopeptide-based chiral LC column for the separation of the amphetamine and methamphetamine enantiomers.

Phenomenex Strata-X Drug B strong cation exchange with mixed-mode sorbent was used for the solid phase extraction (SPE) procedure. 25 µL of internal standard solution (1000 ng/mL racemic amphetamine-D8 and 200 ng/mL racemic methamphetamine-D14) was added to 250 µL of sample. 250 µL 50 mM phosphate buffer pH 6 was then added to the sample before loading onto the SPE column. No equilibration of the SPE cartridges was necessary. The cartridge was then washed with 1 mL of 100 mM sodium acetate pH 5 followed by a further wash with 1 mL methanol. The SPE cartridge was dried under full vacuum for 10 minutes and the analytes eluted using 500 µL ethyl acetate, isopropyl alcohol, ammonium hydroxide 70:20:10. 25 µL 0.5 M methanolic-HCl was added prior to drying for 15 minutes at 35 °C under nitrogen. The sample was then reconstituted in 250 µL mobile phase.

A 3200 QTRAP® System operating in Multiple Reaction Monitoring (MRM) mode was used for detection. Each analyte and internal standard was monitored using two transitions and

the system ran in positive TurboIonSpray® probe mode. A two-

Figure 3 shows a representative chromatogram of urine spiked at 40 ng/mL of each analyte, extracted and analyzed. The LLOQs for methamphetamine and amphetamine are 1 ng/mL and 4 ng/mL, respectively. Data at these levels are shown in figures 4 and 5. How well the separation of the enantiomeric forms of both amphetamine and methamphetamine was achieved in relation to concentration is shown in Figure 2. 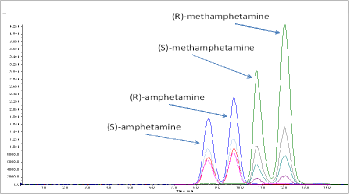 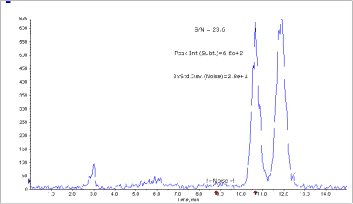 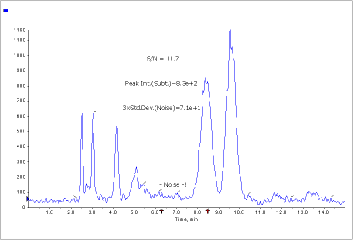 Linearity of the method covered the range from LLOQ to 25000 ng/mL. Precision and accuracy were typically better than 10%. Calibration curves demonstrating the precision, accuracy and linearity for each analyte are shown in Figure 6. Figure 11 shows the linearity statistics over three batches with a minimum

Recoveries from urine using the SPE method were evaluated and determined to be >95% for all compounds. Matrix effects were evaluated at 20 ng/mL using three different lots of urine. Average % accuracy differences obtained for all four compounds from lot A, B and C were 4.3 %, 24.3 % and -3.3 % respectively. Interferences from over-the-counter-drugs on a 20 ng/mL racemic sample of amphetamine and methamphetamine were also evaluated. The drugs investigated in the study ranged from 50 to 625 µg/mL and included those shown in Table 2. Of the 20 compounds listed (including enantiomers) only phenylephrine and norephedrine showed any interference with the analysis of either amphetamine or methamphetamine enantiomers.

Precision (%CV) and accuracy were typically within 5% and 10%, respectively, across the analytical range. 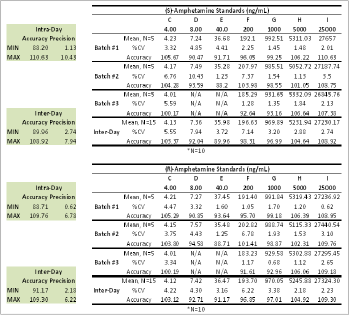 Figure 7. Inter-day and intra-day accuracy and precision for analysis of amphetamine calibrators

Figure 8. Inter-day and intra-day accuracy and precision for analysis of methamphetamine calibrators 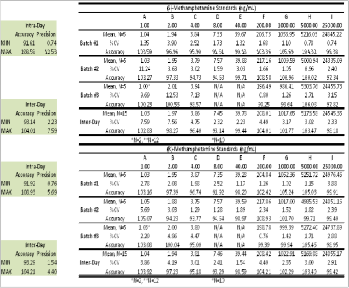 Figure 9. Inter-day and intra-day accuracy and precision for analysis of amphetamine QCs 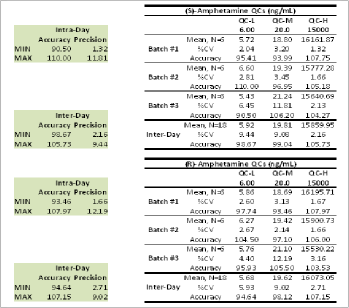 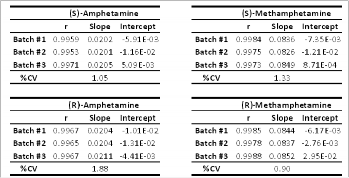 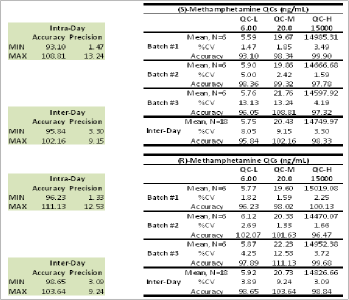 Figure 10. Inter-day and intra-day accuracy and precision for analysis of methamphetamine QCs

Table 2. Compounds used in the evaluation of the over-the - counter drug interferences

An LC-MS/MS method has been developed that allows the separation of racemic amphetamine and methamphetamine to allow the accurate quantification of the individual enantiomeric forms. The linear quantifiable range is from ≤4 ng/mL to 25 000 ng/mL. Precision and accuracy were better than 5 % for most concentrations and better than 15 % for all concentration levels.

For Research Use Only. Not for use in diagnostic procedures.

© 2013 AB SCIEX. The trademarks mentioned herein are the property of AB Sciex Pte. Ltd. or their respective owners. AB SCIEX™ is being used under license. Publication number: 7400113-01, Document number: RUO-MKT-02-0403-A

You have added a user.

You have created and added a user.

Unfortunately the serial number you provided shows as inactive in our database. Would you like to submit the case anyway?

This serial number could not be found.  Would you like to submit the case anyway?

Your attachment has been successfully deleted.

A verification link has been sent to your email.

Your insturment has been removed.

Thank you for your rating
Your password is set.
File must be less than 20MB
You must be logged in.
Invalid token - please reload the page and retry.
This email is already associated with this instrument
Could not find request
Could not validate the key against any instrument requests

Unfortunately the serial number you provided shows as inactive in our database. Please open a support case here if you require more assistance.