Framingham, MA — SCIEX, a global leader in life science analytical technologies, has announced that Dr. Gyula Vigh, Emeritus Professor of Chemistry and inaugural holder of the Gradipore Chair in Separation Science at Texas A&M University was named the recipient of the Arnold O. Beckman Award for Outstanding Scientific Achievements in the field of electrodriven separation techniques. The award was presented on April 28th, 2015 as part of the Special Award Plenary Session at the 31st International Symposium on Microscale Bioseparations. 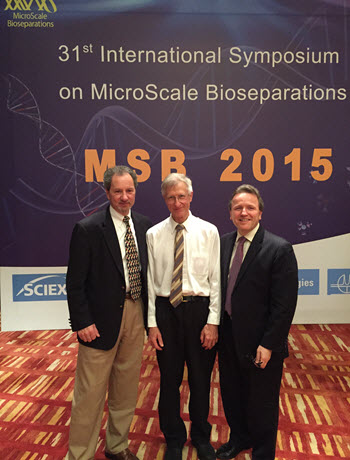 The Arnold O. Beckman award is given to an individual for noteworthy career achievements supported by a significant lifelong body of work, with particular consideration being given to the development of new methods, techniques and high-impact applications in the field of electrophoresis. Attendees of the International Symposia on Microscale Bioseparations submit a list of potential honorees based on their achievements and the strategic planning committee of the symposium series selects a winner. The award comprises a Medal, Diploma and a Monetary Prize.

Professor Gyula Vigh earned his undergraduate and doctoral degrees from the University of Chemical Engineering, Veszprem, Hungary, in 1970 and 1975, respectively, and became a faculty member there, in the Institute of Analytical Chemistry. In 1985 he joined Texas A&M University, where he served two terms as chairman of the Analytical Division in the Department of Chemistry. In 2001, Dr. Vigh was appointed to Texas A&M University’s Gradipore Chair in Separation Science. He also served as a Symposium Volumes editor for the Journal of Chromatography and was a member of the editorial boards of the major chromatographic and electrophoretic journals.

His research focused on both the theoretical and practical aspects of high performance chromatographic and electrophoretic separation methods. At Texas A&M University, he graduated 34 PhD students, published 178 papers, and obtained 5 US patents. In 2011, he received the Hungarian Society for Separation Sciences (HSSS) Halász Medal Award recognizing research excellence in the separation sciences, before retiring in 2013.

"SCIEX is proud to continue Beckman Coulter’s heritage with capillary electrophoresis by sponsoring this annual award. Honoring scientists who have dedicated their lives to find answers to complex analytical challenges, is core to our mission," said Jeff Chapman, Senior Director for the Separations Business at SCIEX. "Dr. Vigh’s life work truly represents the essence that this award was established to recognize, as his scientific contributions have impacted what is now the cutting edge implementation of capillary electrophoresis."

"The work this award recognizes would not have been possible without the dedicated contributions of a large number of very talented undergraduates, graduate students and postdoctoral research associates whom I had in my laboratories over the past thirty five years," said Dr. Gyula Vigh, emeritus professor of chemistry and inaugural holder of the Gradipore Chair in Separation Science at Texas A&M University. "Their desire for, and commitment to new knowledge and excellence is what allowed us to take on challenging projects that eventually yielded a deeper understanding of the fundaments of our field. It is with them, and through them that terra incognita became terra cognita. It is on their behalf as well as mine that I gratefully accept this award."