Framingham, MA — SCIEX, a global leader in life science analytical technologies, has announced that the MSB Strategic Planning Committee has selected Dr. Shigeru Terabe, Professor Emeritus of the University of Hyogo in Kamigori, Hyogo, Japan, as the recipient of the Arnold O. Beckman Medal and Award for Outstanding Scientific Achievements in the Field of Electro-driven Separation Techniques. The Medal Ceremony was presented on Tuesday, March 28th as part of a Special Award Plenary Session at the 33rd International Symposium on Microscale Bioseparations (MSB 2017). 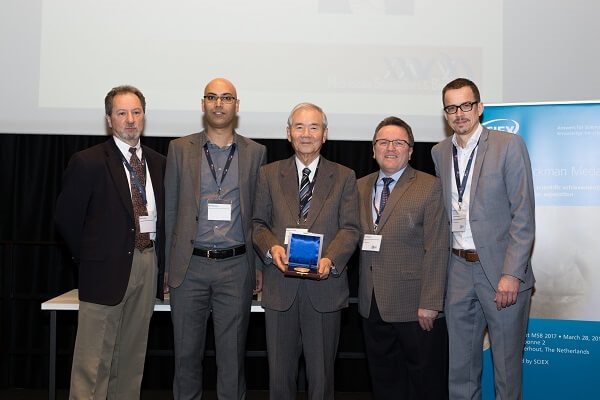 The Arnold O. Beckman award is given to an individual for remarkable career achievements, with particular consideration being given to the development of new methods, techniques and high-impact applications in the field of electro-driven separations. The award comprises a Medal, a Diploma and a Monetary Prize.

Professor Terabe earned his undergraduate, masters and doctoral degrees from Kyoto University, Japan in 1963, 1965 and 1973, respectively. Professor Terabe began is career at the Shionogi & Company Ltd, where he was a research chemist. Later, he joined Arizona State University, where he was a research associate before returning to Kyoto University, Japan to become an assistant professor. In 1990, he was appointed to the Faculty at Himeji Institute of Technology, Kamigori, Hyogo, Japan and has since been engaged in the practice of analytical chemistry. After retiring, Professor Terabe served as a Research Supervisor of the program “Precursory Research for Embryonic Science and Technology” funded by the Japanese government from 2004–2010. In his role, Professor Terabe assisted 40 top young analytical scientists by funding ca. 5 million USD per year for the project, “Structure Function and Measurement Analysis”.

Professor Terabe has been a driving force in understanding the fundamentals of capillary electrophoresis including the introduction of Micellar Electrokinetic Chromatography and a myriad of its applications, as well as the development of sweeping, a “stacking” approach for neutral analytes. His 250 original research publications have been cited more than 15,000 times altogether ranking him in the top 200 among all chemists. Professor Terabe has been awarded the ACS Award in Chromatography in 2004, CASSS Award in 2007, and the Chemical Society of Japan Award in 2008 in recognition of his contributions to analytical chemistry. He served as an Editor of Journal of Chromatography for 15 years and in 2011 he was Chairman of the IUPAC International Congress on Analytical Sciences.

“This annual Medal and Award sponsored by SCIEX recognizes the achievements of those that have made a momentous impact on capillary electrophoresis”, said Jeff Chapman, Sr. Director, SCIEX. “Professor Terabe’s invention of micellar electrokinetic chromatography has inspired many scientists, both utilizing and building upon this fundamental methodology.”

“I am humbled to be the recipient of the prestigious Arnold O. Beckman award, a notable honor that has recognized distinguished colleagues that have impacted diverse scientific and technical disciplines,” said Dr. Shigeru Terabe, Professor Emeritus of the University of Hyogo in Kamigori, Hyogo, Japan. “Dr. Beckman’s achievements have inspired me and I would like to express my gratitude to MSB for this esteemed award. ”