This technical note describes how the lower limits of quantification (LLOQs) for antisense oligonucleotides (ASOs) in rat plasma are further improved by using a microflow trap-andelute method. Compared to previously published data acquired using analytical flow LC on a SCIEX 7500 System1 , sensitivity was increased by a factor of 20 (see Table 1 for achieved LLOQs). Compared to data with the same microflow method using a QTRAP 6500+ LC-MS/MS System, the sensitivity was improved by a factor of 3. 2

Oligonucleotide therapeutics and gene therapies are rapidly gaining attention as their potency improves and delivery challenges are addressed. Modalities such as ASOs are becoming more important due to their high specificity and ability to reach formerly undruggable targets. Sensitive and robust methods for quantitative analysis of oligonucleotides are needed to support the development of ASO therapeutics. Ligand binding assays using fluorescence detection can achieve very low detection limits. However, linear dynamic range is limited, and this type of assay often cannot differentiate oligonucleotides from their impurities and metabolites. LC-MS/MS can provide excellent selectivity, good sensitivity and the ability to analyze multiple oligonucleotides in a single assay. However, for studies where sample is limited, such as preclinical pharmacodynamic studies in rats or mice, sensitivity can still be insufficient.

Published data shows that the use of microflow LC lowered the LLOQ by an order of magnitude for several ASOs in an LCMS/MS assay using the QTRAP 6500+ System. 3 The use of a trap-and-elute microflow approach allowed injection of large volumes of extracted plasma samples, up to 30 µL, without increasing run times significantly. This technical note describes a further improvement of the LLOQs using the same trap-and-elute microflow method, with the more sensitive SCIEX 7500 System.

Samples and reagents: Fomivirsen, nusinersen, eluforsen, a model fully phosphorothioated 2’O-methylated oligonucleotide with the sequence mU*mA*mU*mC*mC*mG*mC*mC*mU*mC*mG*mU*mG*mA*m G*mA*mA*mG*mA*mU and an internal standard with the sequence CATGGTCCTGCTGGAAGTTCGTG were all purchased from IDT. The ion-pairing reagents 1,1,3,3,3- hexafluoroisopropanol (HFIP, ≥ 99.8%) and diisopropylethylamine (DIEA, ≥ 99.5%,) were purchased from Sigma Aldrich. Ethylenediaminetetraacetic acid (EDTA) was also purchased from Sigma Aldrich.

Chromatography: A SCIEX M5 MicroLC System was used in trap-and-elute mode. A separate sleeve-type column oven was used to control the trap column temperature. Gradient and other chromatographic conditions and columns are summarized in Tables 2 and 3. A volume of 30 µL of reconstituted sample was loaded onto the trap column. 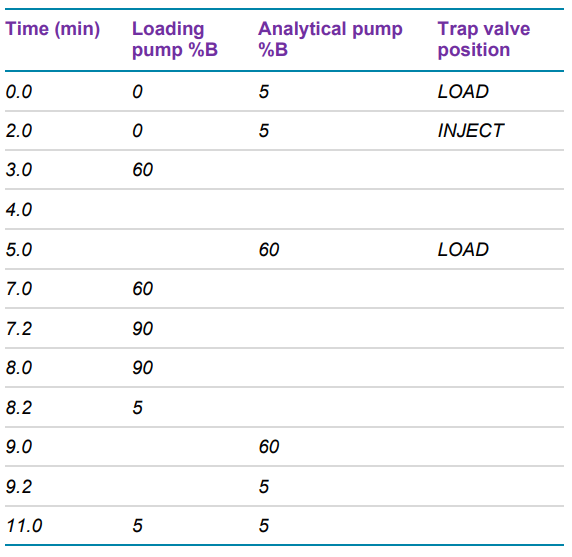 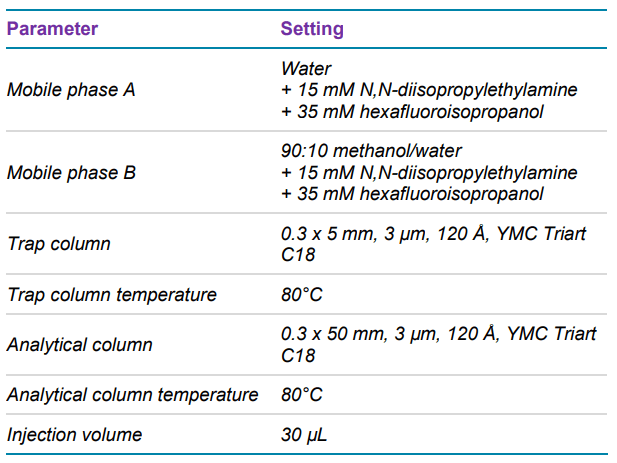 Mass spectrometry: A SCIEX 7500 System with an OptiFlow Pro Source with E Lens™ Technology and micro (low) electrode was used in MRM mode. All source and MS parameters were optimized (Tables 4 and 5). The MS method included two MRM transitions for each analyte and one MRM transition for the internal standard (IS). 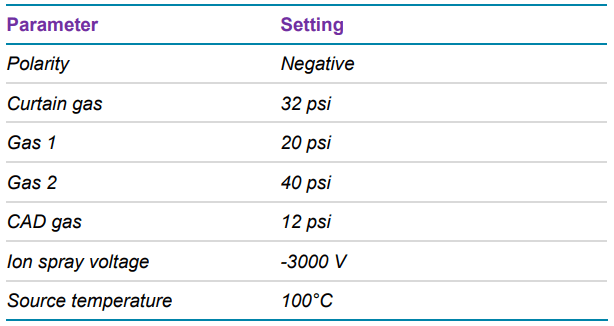 Figure 1 shows baseline separation was achieved for the four oligonucleotides and the internal standard. MRM transitions used for the quantification of oligonucleotides and their metabolites/impurities often share the same fragment, and there is possible overlap among the precursors because of the large number of charge states with similar intensities. Therefore, it is important to have good chromatographic separation of all analytes and the internal standard.

Calibration curves were measured in triplicate for all of the analytes by spiking the analytes into plasma extract in the concentration range between 0.01 and 100 ng/mL. Exceptional accuracy and precision were achieved for all analytes (Table 6). LLOQs and linear calibration curve ranges were determined based on the requirements that the %CV of the calculated mean of the concentration is below 20% at the LLOQ and below 15% for all higher concentrations, while the accuracy of the calculated mean is between 80% and 120% at the LLOQ and between 85% and 115% for the higher concentrations.

The LLOQ for eluforsen was found to be 0.03 ng/mL, while the LLOQs for the other oligonucleotides were 0.01 ng/mL. For methyl-oligo, the LLOQ was 20x lower compared to what was previously determined using analytical flow LC 1 , demonstrating the sensitivity improvements achieved by using microflow LC. The calibration curves showed excellent linearity up to 100 ng/mL: for each of the analytes, 3.5 orders or higher of linear dynamic range (LDR) was achieved (Figure 2). 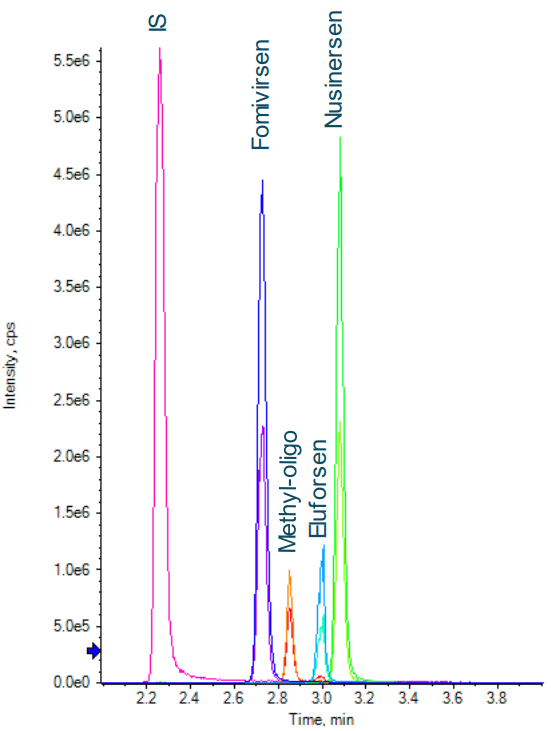 Figure 1. XICs for the MRMs of four ASOs and the IS. Two MRM transitions were used for each analyte, one for the IS. Baseline separation was achieved using a 3 min gradient. 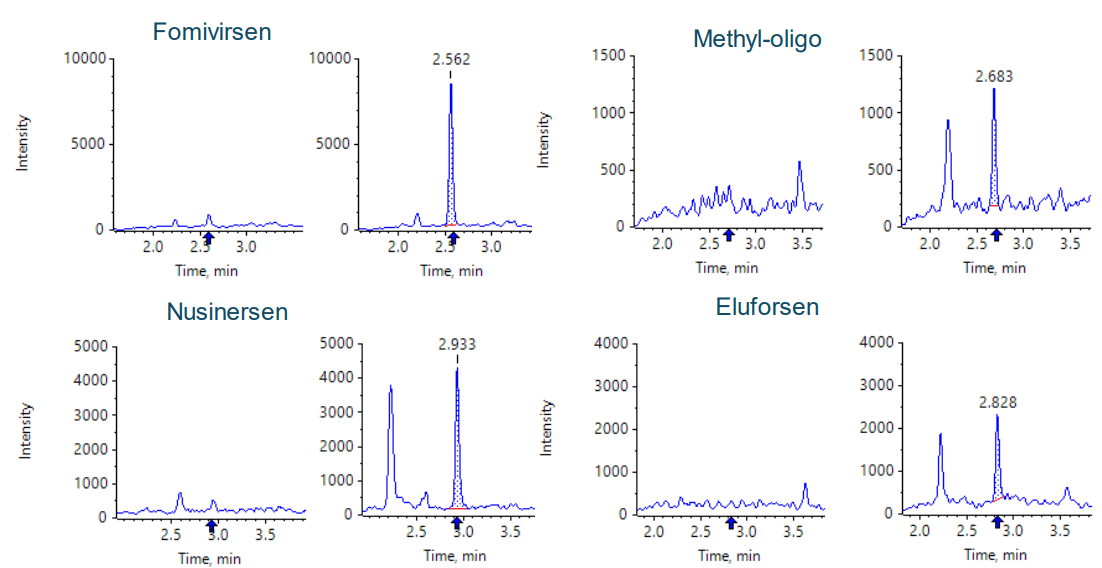 Figure 3. XICs for the transitions of each analyte. Blanks from extracted plasma (left) and ASOs at their LLOQs (right). No noticeable interference was observed in the matrix blank.

Figure 3 shows the XICs of all analytes for a blank extracted plasma injection (left) and at their LLOQ levels (right). No significant interferences were seen, illustrating efficient clean-up of the plasma matrix using the Clarity OTX SPE cartridges. Carryover was determined to be around 0.5% in the first blank after injecting the upper limit of quantification (ULOQ). This could be further reduced by adding longer column and trap washes if the full linear range is required.