Characterization of liposomes as a drug delivery vehicle

Advancements in pharmaceutical development have led to more specialized therapeutics and novel ways in which they are delivered. Emerging drug delivery mechanisms are liposomes, which were first discovered in the 1960s, and are currently being utilized as therapeutic transport systems. Liposomes can consist of a lipid mono- or bilayer containing anionic, cationic, and neutral lipids with an aqueous core.1 As a drug delivery system, they protect compounds from degradation, metabolism or early inactivation, and minimize potential pharmacological toxicity, while increasing potency.2 Liposomes can be customized for targeted and/or localized drug delivery.2

For oligonucleotide-based precision therapies like mRNA and CRISPR/Cas93 , the efficacy and acute targeting of specific tissues or cell types to reduce adverse side-effects is crucial. The expansion of liposomes to more specialized lipid nanoparticles (LNPs) has further developed this area of therapeutics. LNPs can be formulated to improve efficacy, stability, and encapsulation of the desired drug.4 The flexible physiochemical properties of liposomes and LNPs require their formulation to be carefully constructed for optimal stability. Inconsistency in their composition can lead to a decrease in a drug’s therapeutic index posing a risk for safety and efficacy. The Comprehensive Targeted Method for Global Lipidomics Screening5 can be employed to profile the lipid makeup of these liposomes and LNPs.

Key features of the SCIEX solution for liposome characterization 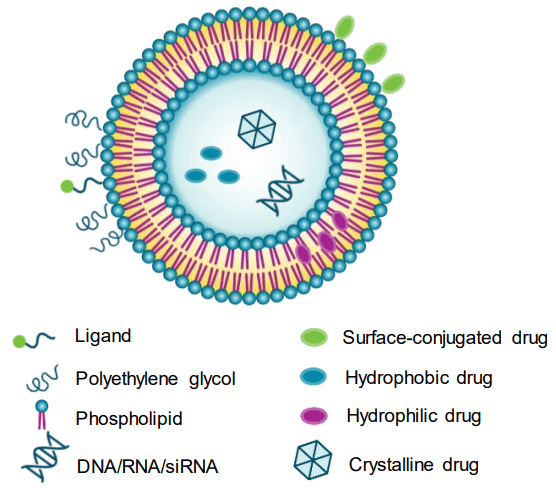 Figure 1. Liposome as drug delivery vehicle. Liposomes and LNPs have the unique ability to package and transport several types of oligonucleotides and other therapeutics.

Sample preparation: After extrusion, egg solution was extracted using Bligh-Dyer protocol.6 Briefly, 2 mL of methanol and 0.8 mL of chloroform were added to 1 mL of the extruded egg solution. SCIEX Lipidyzer™ Platform kits7 were added as internal standards and the mixture was left to sit at room temperature for 30 minutes. Then, 1 mL of water and 0.8 mL of chloroform was added, the sample was lightly vortexed, and centrifuged. The lower layer was collected, dried down, and resuspended.

Chromatography and mass spectrometry: A SCIEX ExionLC™ System equipped with a Luna NH2 column (Phenomenex) and a gradient of 17.5 min were used for separation. MS data were acquired with a SCIEX 7500 System equipped with an OptiFlow® Pro Ion Source and operated using SCIEX OS Software. Details on the chromatographic and MS methods can be obtained from the Comprehensive Targeted Method for Global Lipidomics Screening. 5 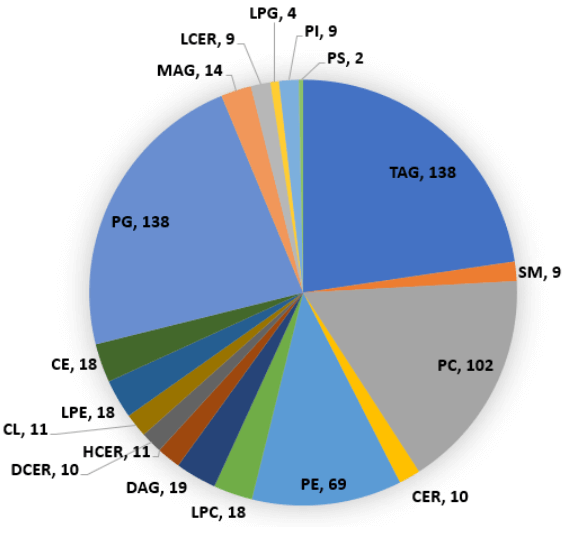 Figure 2. Lipid distribution of extracted liposomes. Overview of the lipid molecular species found in the egg liposomes which can be identified and quantified using the targeted lipidomics MRM assay.5

Here, an extruder kit that is commercially available was used to create the liposome formulation. Egg PC paste was used as the natural mixture for extrusion in order to showcase the characterization of lipids from LNPs using LC-MS. Using a 0.1 µm polycarbonate filter, 1 mL of egg solution was passed through the filter and the subsequent mixture containing the liposomes was collected. After lipid extraction, the sample was reconstituted and run using the Comprehensive Targeted Method for Global Lipidomics Screening.5 The method is optimized for a targeted assay on a broad panel of 20 lipids classes containing over 2000 transitions. The sMRM list is customizable enabling the addition or removal of entire classes or individual lipid species based on the matrix or application. In Figure 2, the pie chart represents the number of lipid species found by lipid class. It provides a rough distribution of the lipid makeup of the egg matrix after extrusion.

Quantification can be necessary when shifting from a natural product to a defined liposome or LNP. Historically, relative quantification with one internal standard per class using Avanti’s SPLASH mix has been the industry standard while analyzing large lipid panels. However, the differential fragmentation inherent to lipids with varying chain lengths and degrees of unsaturation cannot be corrected with a single internal standard alone. To close that gap, Lipidyzer Platform standards were designed providing accurate quantification for a variety of lipid classes (Table 1). 8 The kit contains 54 unique labeled internal standards that spans 13 lipid classes. With multiple standards per class that have variable chain lengths and degrees of unsaturation, the quantitative bias for individual molecular species is less than 10%.8 Table 1 displays the concentrations for the class of LPL using the internal standards from the Lipidyzer Platform kit. 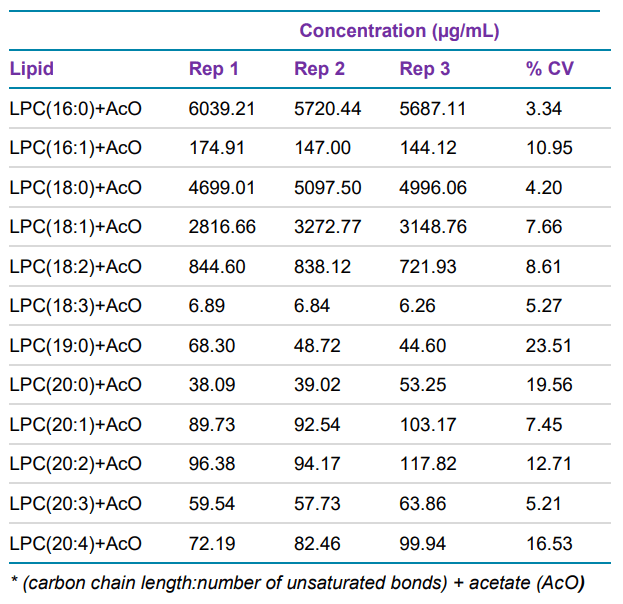 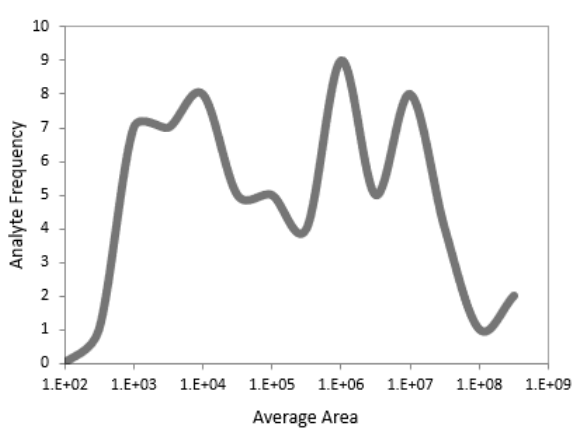 To successfully implement a large panel lipidomic screen, a large dynamic range of the assay is essential. With the sensitivity of the SCIEX 7500 System, >5.5 orders of magnitude dynamic range were achieved (Figure 3). Another issue to overcome is the extensive isobaric overlap between different lipid classes and species. Using a normal phase gradient compared to reverse phase allows the user to achieve class separation and minimizes interferences from isobaric species (Figure 4). With the established method, a complete snapshot of the lipid composition can be detailed for a formulated liposome or LNP. Employing the sMRM Pro Builder template on the profiling data enables a user to further filter results. By filtering the data by total area, lipid species of each class based on a user-specified area threshold are shown (Figure 5). By filtering the panel containing over 2100 MRMs to focus on LPL (such as LPC or lysophosphatidylethanolamines, known as LPE), oxidized lipids or other undesired elements that can contribute to an unstable liposome, users can modify the MRM list easily based on their matrix or focus for analysis.

Within the studied liposome sample, 21 LPL were identified. Several medium- and long-chain polyunsaturated could be detected and quantified in the liposome sample such as LPC(18:3), LPE(20:4), LPC(22:6) and LPE(22:5). These LPL have been implicated in instability or leaky lipid nanoparticles.9 Therefore detection, proper identification, and quantification of this class of compounds can be key to successful drug delivery vehicle formulation by monitoring these lipids during the development and stability studies of LNPs. 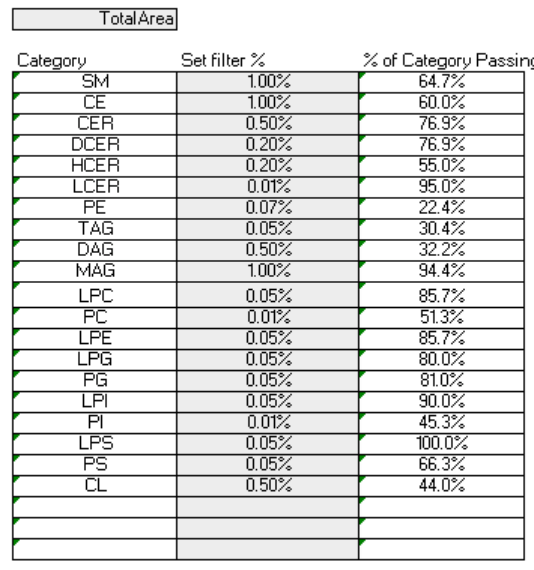 Figure 5. Filtering data by lipid category. The sMRM Pro Builder Template enables users to filter data based on total area. Total area sums all the areas together for a lipid category. Then a percent of total area for each lipid in category is computed. Based on the user set threshold, only lipids that possess a percent of total area above that user threshold are kept in the assay. This threshold setting can be used to provide the primary lipid species in each class or a list of failing analytes within a matrix.