Development of an ultra-sensitive assay for anti-sense oligonucleotide quantification

A notable 4-fold improvement in S/N was achieved for the quantification of an anti-sense oligonucleotide (ASO) when comparing the new SCIEX 7500 System with the previous generation of instrumentation (Figure 1). This new level in sensitivity for challenging analytes in matrix opens doors for accurate bioanalysis and metabolism studies with excellent specificity not achievable with orthogonal methods.

Oligonucleotide therapeutics and gene therapies are rapidly gaining attention as their potency improves and delivery challenges are addressed. Modalities such as ASOs are becoming more important due to their high specificity and capability for treating formerly undruggable targets. Recently, an increase in the number of candidates entering clinical trials and approvals have been observed, triggering increased demand for highly sensitive and robust quantitative bioanalytical methods to understand their pharmacokinetic profiles and metabolism. Conventional approaches for oligonucleotide bioanalysis involve ligand-binding assays (LBA) and fluorescence-based detection primarily due to achieving low detection limits. While such techniques can be highly sensitive, there are limitations in coverage of the linear dynamic range (LDR). Moreover, both assays lack specificity in distinguishing oligonucleotide products from related impurities and metabolites. Furthermore, assays utilizing fluorescence-based detection often suffer from low throughput due to extensive run times. Orthogonal technologies such as mass spectrometry (MS) have been routinely employed for bioanalytical studies of oligonucleotides since the platform is capable of both differentiating between target oligonucleotides and associated components: and providing high-throughput capabilities. However, the extent of MS use to date has been limited by its ability to quantify the ultra-low analyte levels in complex biological matrices.

Herein, ASO in extracted human plasma was quantified using liquid chromatography (LC) coupled to a SCIEX 7500 System. The sensitivity of the assay was significantly enhanced over previous generations of instrumentation by multiple hardware improvements on the ion source and the front end of the mass analyzer. The analyte was quantified at 0.2 ng/mL with outstanding reproducibility, accuracy, and linearity, proving the robustness and performance of the developed method. With this method an LC-MS assay addresses what was previously only achievable with LBAs and fluorescence detection, while offering the potential to simultaneously monitor closely related impurities and/or metabolites. 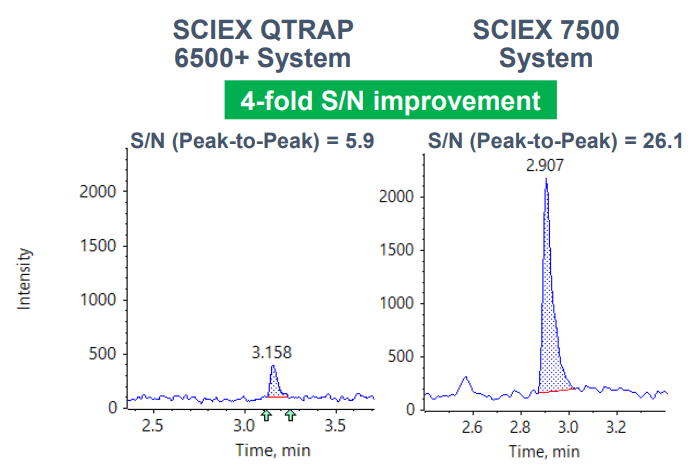 Figure 1. Sensitivity gains for ASO in human plasma. Representative XICs at 0.5 ng/mL are displayed for both systems showing a notable 4-fold increase in sensitivity and S/N.

Samples and reagents: All reagents, including 1,1,1,3,3,3- hexafluoro isopropanol (HFIP)≥ 99.8%, diisopropylethylamine (DIEA) 99.5 % and ethylenediaminetetraacetic acid (EDTA) were purchased from Sigma Aldrich. The customized oligonucleotide standards were synthesized by Integrated DNA Technologies (IDT), including the 20mer analyte of a fully phosphorothioated (*) and 2’O-methylated RNA (m) ASO (mU*mA*mU*mC*mC*mG*mC*mC*mU*mC*mG*mU*mG*mA*m G*mA*mA*mG*mA*mU), the 21mer internal standard (IS) of a fully phosphorothioated ASO (G*C*G*T*T*T*G*C*T*C*T*T*C*T*T*C*T*T*G*C*G), and a carrier oligonucleotide to minimize non-specific binding (CATGGTCCTGCTGGAAGTTCGTG). The Clarity OTX solid phase extraction (SPE) kit was obtained from Phenomenex. Human plasma was purchased from BioIVT.

Sample preparation: 100 μL of human plasma mixed with 100 μL of lysis loading buffer (Clarity OTX kit) was extracted using the Clarity OTX SPE plate following the manufacturer’s protocol. In short, the SPE plate was activated with 1 mL methanol and equilibrated with 1 mL equilibration buffer. After equilibration, human plasma mixed with lysis-loading buffer was loaded onto the plate and washed with 1 mL washing buffer for a total of 3 times and subsequently eluted with 1 mL elution buffer. The eluted samples were dried down with N2 gas at 40 °C and reconstituted in 100 µL mobile phase A (100 mM HFIP and 15 mM DIEA in water) containing 100 μM EDTA. The calibration curve ranging from 0.05 ng/mL to 10,000 ng/mL was prepared by spiking the analyte ASO into extracted human plasma along with 1 µg/mL IS and 2 µg/mL carrier oligonucleotide.

Mass spectrometry: On-column method development was performed, as transitions and source/gas parameters are highly dependent on LC-MS conditions. In order to compare the sensitivity difference between the SCIEX QTRAP 6500+ System and SCIEX 7500 System, the calibration curve samples were injected and analyzed in triplicates on both systems with the same MS-dependent parameters, but adjusted source/gas parameters for each instrument. Tables 2-3 summarize the MS parameters that were optimized for each specific hardware configuration. 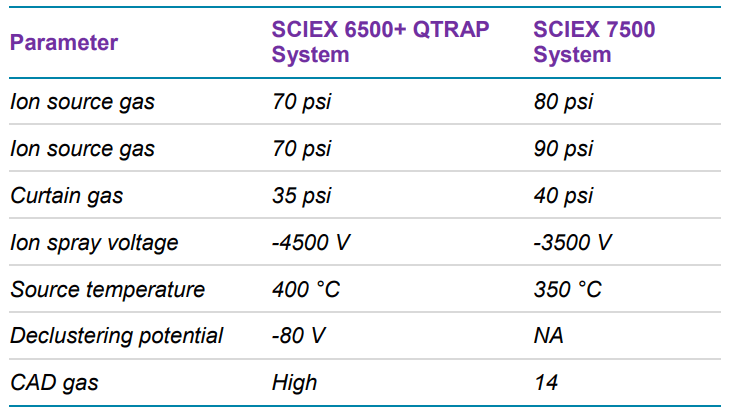 Table 3. MRM parameters. MRM specifications were the same on both the SCIEX 6500+ and SCIEX 7500 Systems.

Investigation of improvements in sensitivity were performed using the same ASO calibration set on the SCIEX QTRAP 6500+ System and the SCIEX 7500 System.

With novel hardware improvements, the presented LC-MRM assay demonstrated ultra-high sensitivity for quantification of ASO in human plasma with the LLOQ at 0.2 ng/mL and LOD at 0.05 ng/mL (Figure 2). On the SCIEX QTRAP 6500+ System, a concentration of 0.2 ng/mL was detectable. Using the SCIEX 7500 System, this level can now be solidly quantified with %CV below 6% for all tested samples (Figure 3). Overall, the SCIEX 7500 System offers a notable 4-fold enhancement in S/N.

Both systems offer an LDR covering 4.5 orders of magnitude (Figure 3 and Figure 4). However, a lower LLOQ is enabled with the SCIEX 7500 System for ASO quantification in matrix with great accuracy and reproducibility for the entire range of concentrations (Figure 3). Therefore, the LC-MRM method provides substantial improvement in monitoring low-level analytes when compared with LBAs and fluorescence-based detection. 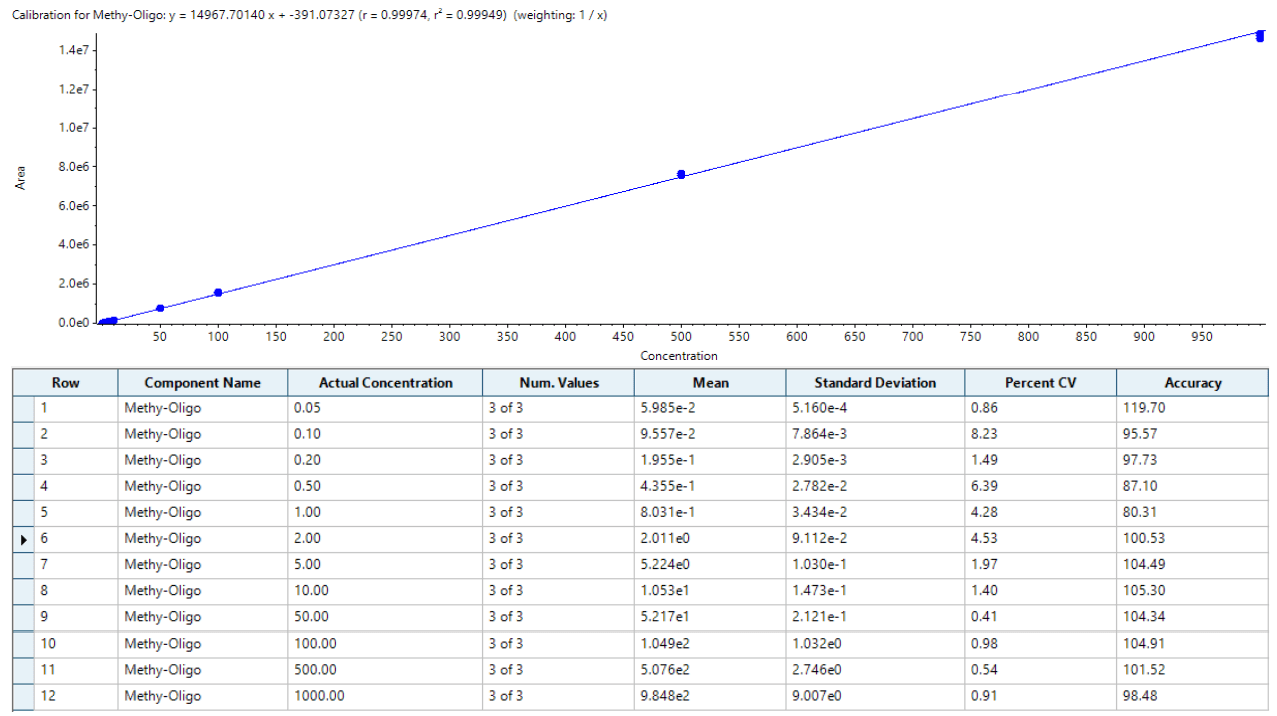 Figure 3. Quantification results for ASO in human plasma from SCIEX 7500 System. Calibration curve of ASO in human plasma with an LDR covering 0.05 ng/mL to 1,000 ng/mL (top). Exceptional %CV and accuracy results demonstrated the overall robustness and performance of the LC-MRM assay (bottom). 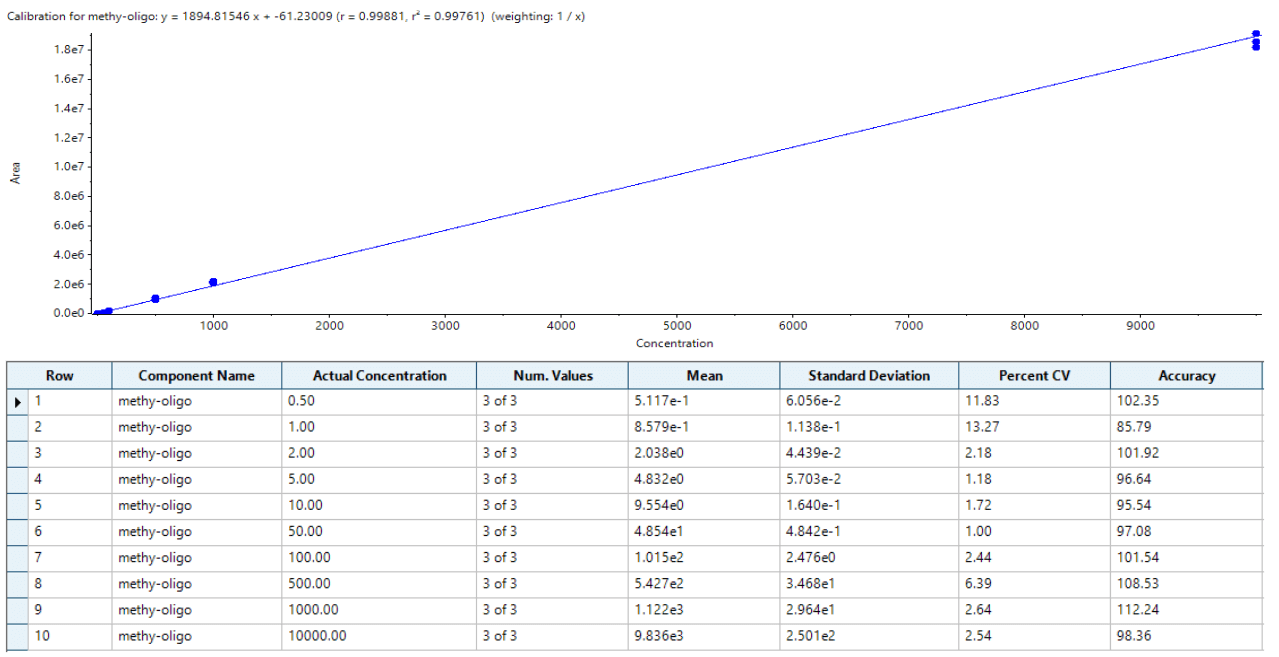