Here, the demonstrated SCIEX CCMA method offers high sensitivity, selectivity, and robustness for the identification and quantification of over 110 compounds in a single analytical method in under 20 mins with a 4x signal to noise (S/N) improvement on average.

Comprehensive quantification of the components in cell culture media (CCM) is an important factor during the development phases of biotherapeutic production. More specifically, CCM undergoes consistent compositional changes as it progresses through the manufacturing process. Ensuring optimal CCM conditions as well as the overall quality of the biotherapeutic has driven the need to develop analytical assays that are sensitive, accurate and robust to allow for comprehensive profiling of CCM components. Researchers performing this analysis can desire to quantify over 110 analytes from various compound classes. Given the wide range of polarities and separation properties of such compounds, it can be challenging to have a single method that can perform this analysis. This is especially true for lower MW, high polarity and low-level target compounds. Thus, a highly sensitive method is required to ensure that the necessary limits of quantification are met and a thorough analysis of targets in CCM is achieved.

Conventional platforms such as biosensor-analyzer, NMR, and Raman spectroscopy are typically unable to offer a singleplatform qualitative and quantitative method for CCMA in matrix with high sensitivity, selectivity and throughput. In comparison, SCIEX CCMA methods for triple quadrupole and high resolution QTOF systems offer high sensitivity, selectivity, and robustness for the identification and quantification of over 110 compounds in a single analytical method in under 20 mins.

Figure 1. Demonstration of a 4-fold average S/N improvement, resulting in greater sensitivity. In a representative collection of 23 compounds, 78% of CCM compounds achieved ≥ 2-fold enhancement in S/N.

Sample preparation: Cell culture media samples (CD CHO media, Gibco) with unknown concentrations of analytes were diluted in 100 µL of 50:50 (v:v) 0.1% formic acid (FA) in water and 0.1% FA in acetonitrile and centrifuged. The supernatant was further diluted with 0.1% FA in water resulting in a total dilution factor of 300. 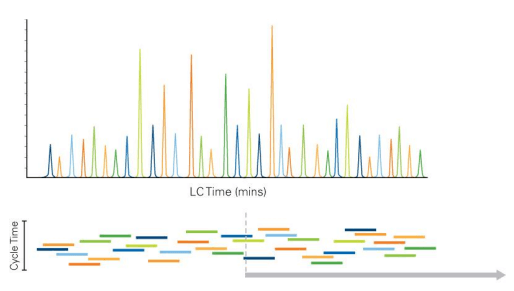 Mass spectrometry: MRM parameters for more than 110 cell culture components were optimized using chemical standards on a SCIEX Triple Quad 6500+ System. For both the SCIEX Triple Quad 6500+ and the SCIEX 7500 System, the Scheduled MRM™ Algorithm Pro was used to optimize cycle times and maximize dwell times for each MRM transition (Figure 2). By scheduling transitions around the expected retention time of an analyte, the sMRM method enables monitoring of significantly more MRMs simultaneously without sacrificing superior analytical precision. 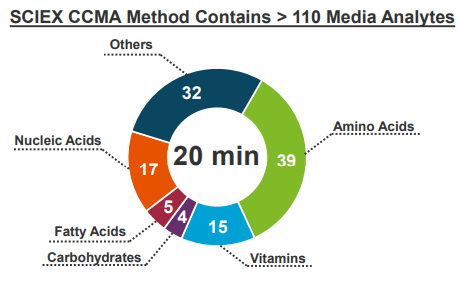 Figure 3. CCMA method features the ability to identify and quantify over a 110 media analytes in under 20 min. The method is composed of CCM target analytes from classes such as amino acids, vitamins, carbohydrates, fatty acids, nucleic acids, and other essential components.

Two MRM transitions were monitored for each analyte, with a few exceptions when only one MRM was available for analytes ionized in positive and negative mode. This allows for comparisons of ion ratios to help identify potential peak integration issues. This final method contains 178 MRMs in positive and 54 MRMs in negative ionization mode which enables monitoring of over 110 media analytes (Figure 3). Detailed MS parameters are shown in Table 1. For both systems, fast polarity switching allowed analysis in positive and negative ionization modes within one method.

Some of the key challenges often encountered during CCMA are that target compounds have low MW, are highly polar and are present in low levels of matrix. Hydrophilic interaction liquid chromatography (HILIC) has emerged as a popular option for separation of some classes of CCM compounds. However, given the range of structural diversity amongst the various CCM components, HILIC-based separation becomes less compelling when compared to traditional reversed-phase chromatography. Moreover, HILIC methods often suffer from long run times as a result of extended re-equilibration which lowers overall reproducibility of analyte retention.

In addition, the SCIEX 7500 System comes equipped with novel hardware improvements that enable an overall increase in S/Nbased sensitivity by a notable amount for general quantification. 3 The newest generation OptiFlow Ion Source provides high flexibility with interchangeable flow range capabilities where minimal source optimization is required speeding up the method optimization. With the E Lens Technology, a stronger field from the electrode imparts higher energy to the droplet for efficient release of ions, resulting in a greater ion collection and overall sensitivity. The D Jet Ion Guide ensures better capture, focusing, and transmission of ions into the higher vacuum region allowing for increased analyte sensitivity compared to previous instrument generations.

Sensitivity improvements were investigated in depth by performing a comparative analysis using the CD CHO media first analyzed on the SCIEX Triple Quad 6500+ System and then on the SCIEX 7500 System. Fresh CD CHO media samples were maintained at a temperature of 4°C to ensure stability throughout the evaluation. 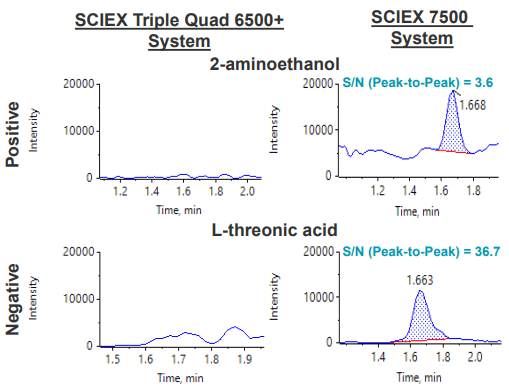 The SCIEX 7500 System showed significant enhancements in detection and quantification limits of CCM compounds (Figure 4 and Figure 5). Low level target analytes which were previously not detectable are now within the detectable and quantifiable range (Figure 4). Examples of such target analytes include 2- aminoethanol, an essential component for growth of hybridoma cells4 , and L-threonic acid, one of the metabolites of ascorbic acid.5 On the SCIEX 7500 System, 2-aminoethanol was detectable with a S/N of 3.6 while L-threonic acid was well within the quantification range with a S/N of 36.7 (Figure 4).

In addition, S/N enhancements were observed across various CCM classes including amino acids, nucleobases, vitamins, fatty acids, and other essential components. Representative examples from each class are shown in Figure 5. L-cystine is one of the five amino acids (arginine, cystine, glutamine, histidine, tyrosine) which is responsible for the growth and survival of cells in culture.6 On the SCIEX 7500 System, a notable 10.6-fold enhancement in S/N was observed for Lcystine compared to the SCIEX Triple Quad 6500+ System. Likewise, a necessary nucleobase, guanine, required for successful cell growth, gained sensitivity by 5.9-fold. Biotin, which is one of the essential vitamins that plays a role in energy metabolism and fatty acid synthesis,7 underwent a 3.1-fold increase in S/N. In cell culture media, fatty acids such as linolenic acid (LA, 18:2n-6), provide a form of energy storage and are vital precursors for the biosynthesis of other essential compounds.8 A 2.6-fold greater sensitivity for LA was observed.

Putrescine, which is a crucial compound for cell growth and an important precursor for the biosynthesis of polyamines,9 showed a considerable increase in S/N by 2.7-fold. In this manner, boosts in signal sensitivity were observed across various CCM compounds which enabled improved S/N ranging from a factor of 2 to 10-fold on the SCIEX 7500 System.