Find, relatively quantify, and confirm the structure of oligonucleotides and their impurities using the SCIEX ZenoTOF 7600 system and Molecule Profiler software

Oligonucleotide therapeutics and gene therapies are rapidly gaining attention as their potency improves and delivery challenges are addressed. Modalities such as antisense oligonucleotides (ASOs) are becoming more important due to their high specificity and ability to reach formerly undruggable targets. To ensure safe drugs, methods for the identification and characterization of the full length product (FLP) and impurities are critical. High resolution mass spectrometry (HRMS) can be used for the identification of potential impurities, by comparing the measured accurate masses and isotope patterns with those calculated. However, there is a lack of powerful yet intuitive processing software, and manual interpretation is cumbersome and time consuming. Furthermore, structural confirmation leveraging MS/MS adds an additional level of complexity.

Using the Molecule Profiler software to overcome these challenges, this technical note shows the identification and relative quantification of the 5’(n-1), 5’(n-2) and 5’(n-3) impurities of a fully phosphorothioated FLP spiked into an FLP sample at levels between 0.1 and 10% (w/w). The software can perform relative quantification based on TOF-MS, and assign fragment ions of the potential impurities to confirm their structures, facilitating the characterization of drugs in development.

Samples and reagents: A 18-mer 2ʹ-O-methoxyethyl phosphorothioated oligonucleotide with the same sequence as nusinersen, a drug developed for the treatment of spinal muscular atrophy, and its 5’(n-1), 5’(n-2) and 5’(n-3) impurities were ordered (desalted) from IDT. The ion-pairing reagents 1,1,3,3,3-hexafluoroisopropanol (HFIP, ≥ 99.8%) and diisopropylethylamine (DIEA, ≥ 99.5%,), and ethylenediaminetetraacetic acid (EDTA), were purchased from Sigma Aldrich.

Sample preparation: Samples of 10 µg/mL FLP in mobile phase A containing 100 µM EDTA were spiked with the three related shortmers at 0.1, 0.3, 1, 3 and 10% (w/w relative to FLP) in order to mimic process-related impurities. The FLP was used as a control sample.

Mass spectrometry: A SCIEX ZenoTOF 7600 system was used in negative polarity using an MRMHR method (method details available on request). To determine the precursor masses, the data from a TOF-MS scan of the 10% spiked sample was processed using the Molecule Profiler software to extract the m/z values for the most abundant charge states for the FLP, the spiked-in impurities, and the desulfurization products (backexchange of one S to O) of each of these. Collision-induced dissociation (CID) was used, and collision energies (CE) were selected that ensured the generation of fragment rich MS/MS spectra. The parameters for the final MRMHR method are summarized in Table 1. The Zeno trap is located before the TOF pulser and accumulates ions during each TOF pulse, resulting in up to 90% duty cycle. Data was acquired both with Zeno trap on and off, to determine the effect of the Zeno trap functionality on MS/MS data quality. 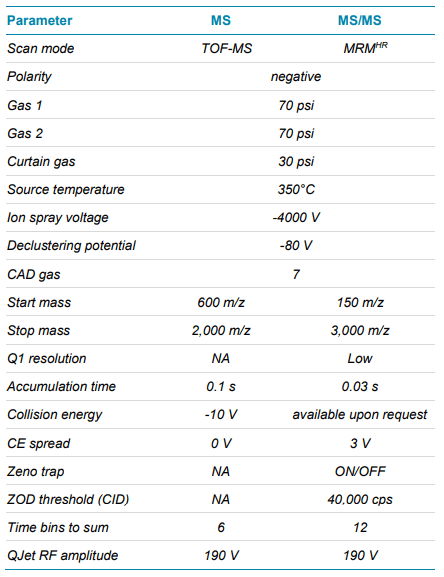 Data processing: Data was processed using the SCIEX Molecule Profiler software. Considering the structure of the oligonucleotide, the number of bonds to break in the parent structure, and a comprehensive list of 83 possible standard transformations, the software identifies the different charge states of potential impurities. This assignment is based on the accurate mass match - a 20 ppm tolerance was used for the work presented in this application note - and the match between the measured and theoretical isotope patterns. Additional transformations can be added, while also custom nucleotide residues can be used by defining the 5’ and 3’ linkers, sugar, base and phosphate groups (Figure 2). The list of found potential impurities can be manually curated, and the different charge states of each potential impurity are grouped together for relative quantification based on the TOF-MS data.

For confirmation of the structure of each potential impurity, MS/MS spectra can be automatically annotated with a, a-B, w, b, x, c, y and d fragments (see Figure 2). Sequence coverage by consecutive fragments is automatically calculated by the software. 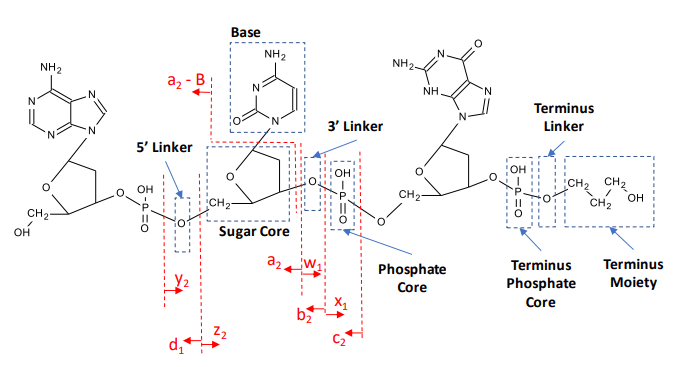 Figure 2. Representation of an oligonucleotide showing the different groups that can be defined for custom nucleotides. Also, the nomenclature of the MS/MS fragments used for sequence confirmation is shown in this figure, taken from the Molecule Profiler software.

Impurities of oligonucleotides are difficult to baseline separate from the main product with reversed phase LC while providing medium to high throughput, especially if they differ only by one or two nucleotides. Modified backbones such as phosphorothioated species are essential for improved pharmacokinetic properties and binding to the target, but complicate separation even further because they are mixtures of diastereomers, resulting in peak broadening. Figure 3 shows the separation achieved for the three spiked in impurities; only the 5’(n-3) showed (partial) separation from the FLP. 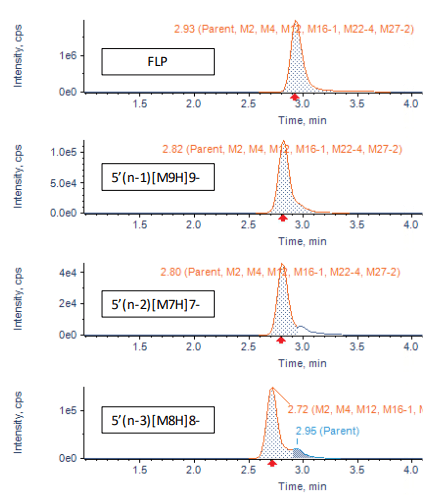 Figure 3. XICs of one charge state for the FLP and each of the spiked-in impurities generated in Molecule Profiler software. (Partial) separation from the FLP was only achieved for the 5’(n-3) impurity.

Samples of 10 µg/mL FLP spiked with the three 5’ deletion impurities at 0.1, 0.3, 1, 3 and 10% (w/w) levels were measured and analyzed using the Molecule Profiler software. Processing parameters (Figure 4) were selected to allow for the identification of the FLP and the impurities. Based on the TOF-MS data, the FLP and potential impurities are being matched to the different charge states (see n-3 impurity matching in Figure 5). All identified charge states can be easily grouped for an automatic calculation of the %area for the main component and each potential impurity. The %area is the sum of the TOF-MS areas of all found charge states of each identified analyte as a percentage of the total area of all analytes found. In Table 2 the %areas of the spiked-in impurities are listed for each of the spike-in levels. The purity found for the control sample is consistent with the information from the manufacturer for products that have not been purified with HPLC.

Figure 4. Main settings used for the identification of potential impurities based on the TOF-MS data. A:The search space was limited to impurities with a maximum of one bond broken and a minimum length of 15 nucleotides (the FLP contained 18 residues). No internal n-1 or terminal n+1 impurities were searched for, as the main objective of this study was to demonstrate the capability of the software to find the spiked-in 5’ n-1 to n-3 shortmers. B: An MS m/z tolerance of 20 ppm was used, and charge states -6 to -10 were considered.

Figure 5. Identification of potential impurity based on the TOF-MS data. A:TOF-MS showing identified charge states (yellow labeling) and suggested ID for the 5’(n-3) at 3% spike-in level. B: Zoom-in to TOF-MS data of charge state -9 for 5’(n-3). Blue arrow indicates the theoretical monoisotopic mass and the first seven isotopes are indicated with red arrows. An overlay of the theoretical isotopic distribution can be used for confidence in the correct assignment.

The main impurities found in the control sample were desulfurization (12.7%), and di-desulfurization (0.78%). Correlation between the spiked in amounts, and the reported relative areas was good for the 5’(n-1) and 5’(n-3) impurities, with small amounts found in the control sample. For the 5’(n-2) impurity the correlation was found to be poor. Upon further inspection of the data, this could be attributed to an overlap of the -8 charge state isotopes of the impurity with those of the -9 charge state of the drug. For relative quantification of this impurity based on MS data, a better chromatographic separation will be required. Alternatively the Analytics module in SCIEX OS software can be used to accurately quantify this impurity based on reconstruction of the TOF-MS data, or by quantification based on fragment masses using MRMHR data. Note that the Molecule Profiler software also supports relative quantification based on UV data (not shown). 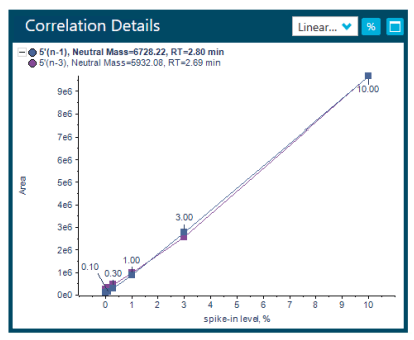 The potential impurities the software suggests are based on accurate mass and isotope pattern matching of the TOF-MS data. The location of a modification, or the actual position of all nucleotides in an impurity cannot be determined with MS only.

As the structure of an impurity can be important for its potential toxicity, confirming the correct structures is critical. The Molecule Profiler software can help in confirming the structures of each of the potential impurities by annotating the MS/MS spectra acquired for their different charge states. Allowing for a, w, c, y and d terminal fragments, and allowing for the loss of one base or water molecule, the Molecule Profiler software was used to annotate the different charge states and calculate the consecutive sequence coverage with an m/z tolerance of 10 ppm. Figure 7 shows an example of the number of consecutive residues being identified in the MS/MS data for all charge states combined for the 5’(n-3) impurity at the various spike-in levels. Full coverage was found for all except the lowest spike-in level (0.10%) when the Zeno trap functionality was used. Without the Zeno trap, the coverage was significantly lower, as expected. Figure 8 provides a comparison of how much more information-rich MS/MS spectra with higher S/N can be acquired using the Zeno trap versus without it. 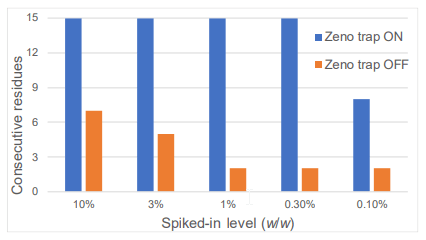 Figure 7. Consecutive residues for different spiked-in levels of the 5’(n-3) impurity, with and without use of the Zeno trap. The impurity has a length of 15 nucleotides.

The higher quality data when using the Zeno trap therefore resulted in the software finding many more fragments. Figure 9 shows an example of identified fragment ions in the MS/MS spectra from an impurity. This information can be used to confirm the identification based on TOF-MS even further. 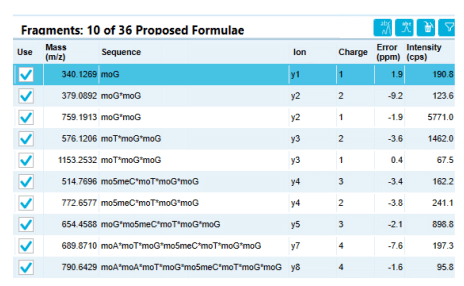 Figure 9. Example of the annotation table in the Molecule Profiler software. The table shows the proposed fragments for a particular m/z, their charge states, mass accuracies and intensities. The data is from the 5’(n-3) impurity -8 charge state at the 3% spiked-in level, acquired using the Zeno trap .Only the y fragments are shown.