Glycosylation is a common modification that occurs during the production of antibodies or other protein therapeutics. It is challenging to chromatographically resolve some types of low abundant glycoforms, such as high mannose glycopeptides.   The ultra-low flow rate of CESI (~20 nL/min) is highly beneficial in maximizing ionization efficiency and minimizing ion suppression.  In this study, we characterized several CQAs, such as glycosylation, deamidation and oxidation of adalimumab peptides, within the same run. A high sequence coverage (>95%) was obtained from less than 40 ng of adalimumab loaded into the CESI cartridge. 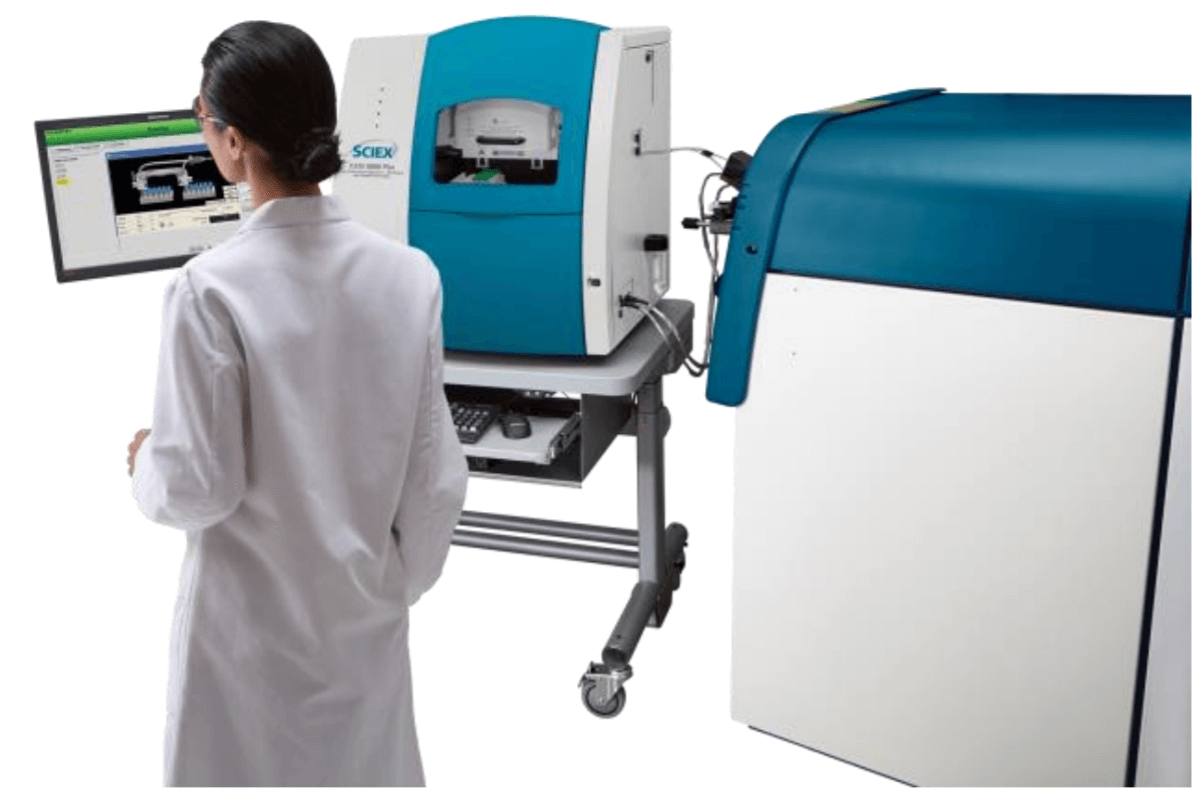 Glycosylation is a common modification that occurs during the production of antibodies or other protein therapeutics. The glycan structures attached to the proteins can directly affect protein stability, bioactivity, and immunogenicity. Therefore, glycan variants of a glycoprotein product must be adequately analyzed and controlled throughout development and production to ensure product quality. Reversed phase-liquid chromatography-mass spectrometry (RP-LC-MS) has become a primary technique for antibody and protein therapeutics characterization. However, it is challenging to chromatographically resolve some types of low abundant glycoforms, such as high mannose glycopeptides (Figure 1).

CESI-MS provides a separation mechanism orthogonal to LCMS based approaches for separation, identification and quantification. It provides the exceptionally high resolution power of capillary zone electrophoresis (CZE) in conjunction with the sample identification capability of mass spectrometry. CZE is uniquely able to separate peptides based on charge difference, unlike a reversed phase HPLC, and provides sensitive and reproducible results. The ultra-low flow rate of CESI (~20 nL/min) is highly beneficial in maximizing ionization efficiency and minimizing ion suppression. In addition, the open tubular format of CESI without any solid stationary phase, allows elution of all peptides from the capillary (both hydrophobic and hydrophilic), thus providing better sequence coverage of the antibody. In this technical note, bottom-up peptide mapping of adalimumab (Humira) and its post-translational modifications (PTMs) were performed by CESI-MS analysis. We were able to electrophoretically separate various classes of glycopeptides and confirm using diagnostic ions in the MS/MS spectra. 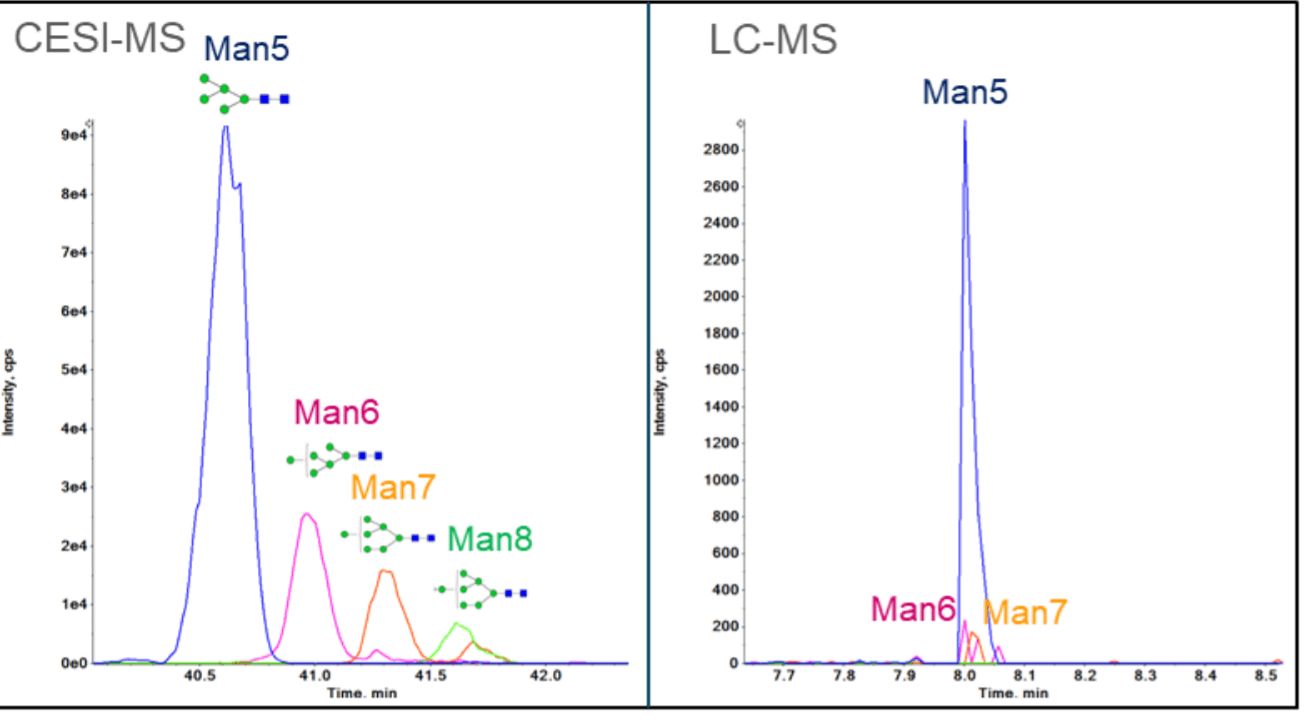 Figure 1. Separation of highly mannose glycopeptides by CESI-MS and LC-MS.

Sample preparation and mAb digestion: Adalimumab (1 mg/ml) was digested with trypsin (gold trypsin, Promega) in a 1:20 (v/v) enzyme-to-antibody sample ratio for 2h at 37°C. Prior to trypsin digestion, antibody was reduced with 20 mM dithiothreitol (DTT) at 56°C for 30 min and alkylated with 20 mM iodoacetamide (IAM) in the dark for 30 min. The alkylation reaction was quenched with 10 mM DTT. A detailed protocol is described in a CESI peptide digest preparation technical note. 1

Capillary electrophoresis and mass spectrometry: CESI method parameters: Trypsin digested sample was diluted in a 1:2 (v:v) ratio with 100 mM ammonium acetate at pH 4. For the analysis, a Bare-Fused Silica Surface OptiMS Cartridge was used (P/N B07367). Sample was injected hydrodynamically at 5 psi for 60 s, resulting in approximately 44 nL injected volume, which is approximately 39 ng of adalimumab on the cartridge. Separation conditions are listed in Table 1. 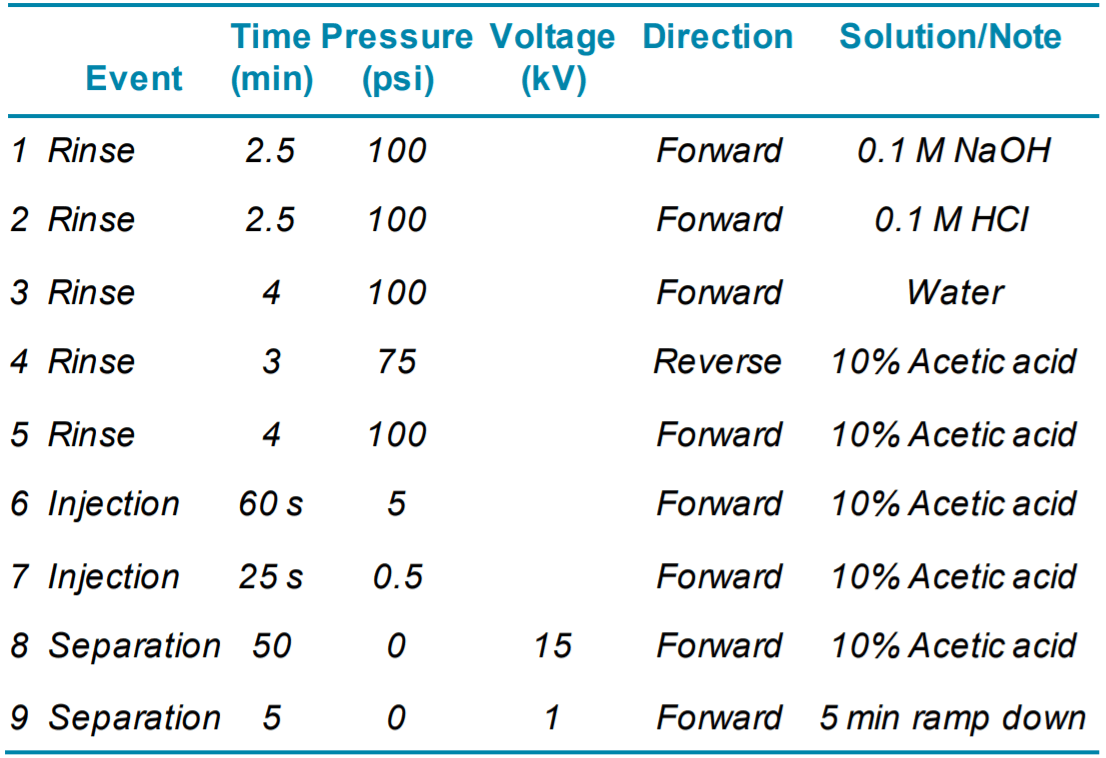 MS method parameters: The TripleTOF® 6600+ System was coupled with the NanoSpray® III Ion Source with CESI adapter (P/N B07366) and controlled by Analyst® Software 1.8.1. The peptide mapping of adalimumab was performed using data dependent acquisition (DDA) with 10 MS/MS cycles (150 and 50 ms accumulation times for MS and MS/MS, respectively). The acquisition mass range was from 100 to 2250 m/z with cycle time of 0.8 s. The precursors with charges from +1 to +5 and intensity above 100 cps were triggered for MS/MS fragmentation. Selected precursors were fragmented using a rolling collision energy (CE) with spread of ± 5 V. The CE curve slope (Table 2) was modified for better glycopeptide fragmentation.2 Source parameters were set to ion spray voltage 1850 V, source temperature 30°C and curtain gas 5 psi.

Figure 2. Separation of high mannose glycopeptides of adalimumab using CESI-MS and LC-MS techniques. A) CESI-MS separation, B) RP-LCMS separation and C) fragmentation spectra of the Man5 glycoform with adjusted rolling CE curve (Table 2) for maximum recovery of the y-ions

Data processing: Data searched with a BPV Flex 2.0 and additional glycopeptide confirmation was performed by processing through Byonic™ (Protein Metrics). The two software, BPV Flex and Byonic, were set to search data with a maximum of two miss-cleavages and +/- 5 ppm error. ProteinPilot™ and PeakView® Software were used to further confirm peptide mapping analysis of adalimumab.

The biologics segment is growing significantly within the therapeutic industry. 3As biotherapeutic products are derived from recombinant DNA technology and produced in host organisms, monitoring of CQAs (Critical Quality Attributes) is crucial to ensure the consistency of product quality, safety and efficacy. Glycosylation is considered as one of the crucial CQA of mAbs and biosimilars. Aunique feature of CESI compare to LCMS analysis is the ability to separate various glycopeptides and characterize the mAb in a single run. In this study, we focus on full characterization of adalimumab.

Separation and identification of glycopeptide of adalimumab

A high-resolution CESI-MS technique is well suited for the analysis of glycopeptides as it separates peptides based on their charge-to-mass ratio. Of these glycopeptides, high mannose glycopeptides are considered to be some of the most challenging to analyze due to their low abundance in the samples. Figure 1 and 2A show a comparison of CESI-MS and LC-MS separation of high mannose glycopeptides. Man5, Man6, Man7 and Man8 were electrophoretically separated from each other, which allowed for the identification of low abundant species compared to the LC analysis (Figure 2B). Furthermore, Figure 2C illustrates fragmentation spectra of Man5 glycopeptide. The y-ion 793 m/z represents the loss of five mannose residues, leaving the two core GlcNAc residues attached to the peptide backbone. The yions 1041 m/z and 879 m/z are losses of 2 an 4 mannose residues, respectively. Sequential loss of oligosaccharides together with precursor provided confirmatory evidence for the presence of the Man5 glycoform. To obtain a good fragmentation pattern for glycopeptides as well as peptides with the DDA, the rolling collision energy curve slope was lowered compared to instrument pre-set values (Table 2).2 In addition to y-ions, common glycan fragments (m/z 204, 366 and 528) are found in the spectra (Figure 2C, 3C and 4C). These fragments have a high sensitivity, but low specificity as they are common for all Nglycopeptides.4

Fucosylate glycopeptides is another class that is important to monitor as a CQA. This group is normally identified by LC-MS, but are challenging to separate using a RP column, which is commonly used for peptide mapping. In Figure 3A, CESI-MS shows three fucosylate glycopeptides (G0F, G1F and G2F) well separated in comparison to the LC-MS analysis (Figure 3B), which missed the low abundant G2F glycopeptide. Figure 3C represents the MS/MS spectrum of G0F glycopeptide.

In addition to higher abundant glycopeptides, we were able to confirm a few minor species, such as G0, G0F-GlNAc and G1FGlNAc (Figure 4). Altogether, we have confidently identified 10 different glycopeptides of adalimumab as listed in Table 3, plus G1 glycopeptides based on their precursor masses.

Our findings are in good alignment with results from release Nglycan analysis using the SCIEX C100HT Biologics Analyzer. 5 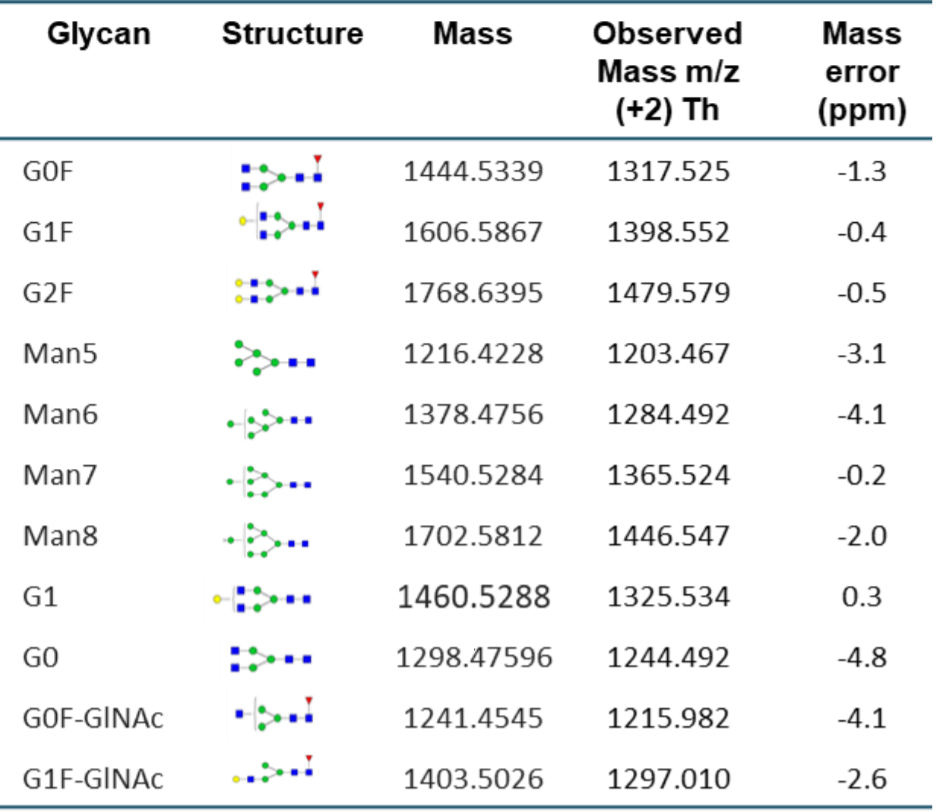 Figure 5. Unmodified vs. peptide with deamidated asparagine are separated by CESI-MS.

CESI-MS is an effective and complementary technology to characterize mAbs on the peptide level with a high sequence coverage; in the case of adalimumab, we confidently map at least 95% of its sequence and have confirmed 11 various glycopeptides.

For the next step, we focused on PTMs, such as deamidation and oxidation. Figure 5 illustrates examples of the separation between the unmodified and deamidated form of VSVLTVLHQDWLNGK peptide. The deamidated peptide was determined to be 6% of the total amount of peptide in the sample. Deamidation is one of the most common PTMs occurring in therapeutic proteins produced using recombinant DNA technology. 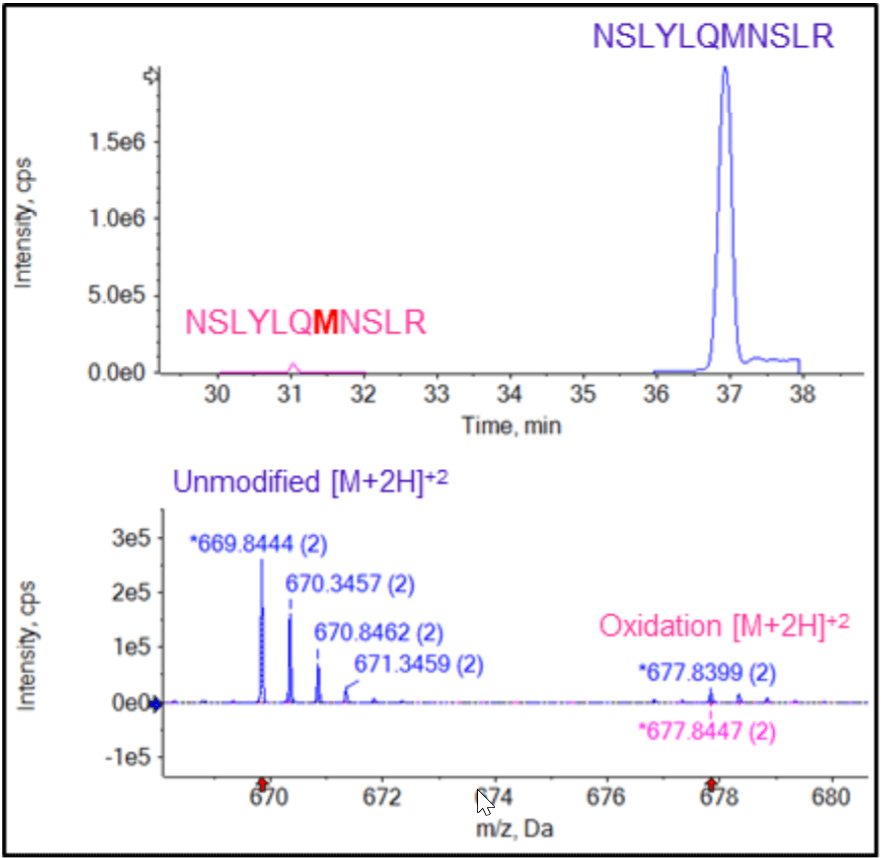 Figure 6. Unmodified vs. peptide with methionine oxidation is separated by CES-MS.

Methionine oxidation as PTM can influence biological activity of the mAb and potentially induce an immunogenic response associated with mAb manufacturing and storage.6 An example of methionine oxidation is shown in Figure 6, NSLYLQMNSLR peptide contains 1.2% of the oxidized form of unmodified peptide.

In addition, CESI-MS is capable of analyzing challenging short peptides or hydrophilic peptides, that could be easily missed by LC-MS7 . Figure 7 shows identification with MS/MS confirmation of short and hydrophilic peptide (VSNK [M+H]+1). 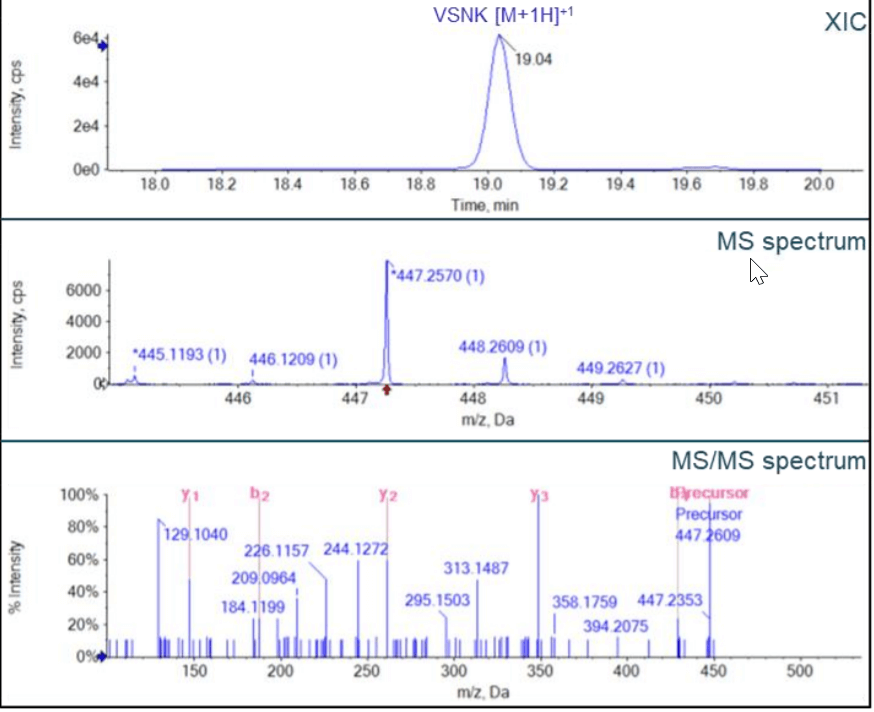 Peptide mapping remains a key analytical methodology to characterize biotherapeutics from drug discovery through production and it provides the ability to assign specific locations to product attributes. It allows monitoring of amino acid substitution as well as post-translation modifications that are critical for a biotherapeutic’s safety and efficacy.

In this study, we characterized several CQAs, such as glycosylation, deamidation and oxidation of adalimumab peptides, within the same run. A high sequence coverage (>95%) was obtained from less than 40 ng of adalimumab loaded into the CESI cartridge.