In the biopharmaceutical sector, plasmid DNA plays an indispensable role in gene therapy. As a gene-delivery vehicle, plasmid is used in vaccination. In addition, it is used for manufacturing viral vectors and for ex-vivo synthesis of therapeutic proteins. Multiple topological variants, including supercoiled, open circular and linear forms are present in most plasmid DNA products. For plasmid DNA vaccines for infectious disease indications, FDA (food and drug administration) suggests setting a release criterion of > 80 percent supercoiled isoform. In this technical note, the development of a high sensitivity method for plasmid analysis by CE-LIF with a common fluorescent dye is presented. Two large vaccine plasmids at 7 to 10 kb in size were analyzed. Results demonstrate that this method is sensitive and robust, providing baseline resolution of supercoiled, open-circular and linear plasmid isoforms within 20 minutes. Furthermore, it can be used for monitoring plasmid degradation in addition to purity analysis. 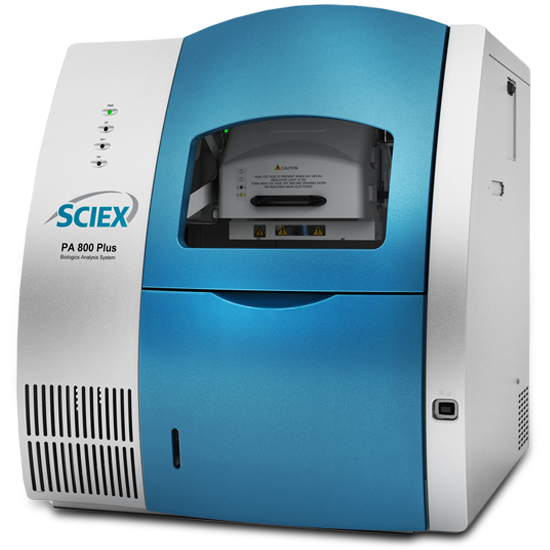 Plasmid DNA is an important part of the biopharma industry. It is used as a gene-delivery vehicle for DNA vaccination and as a key intermediate for processes like viral particle production for gene therapy and ex-vivo protein synthesis. Most plasmid DNA preparations contain several topological variants or isoforms including the supercoiled, open circular and linear forms of the molecule. Federal regulations require purity testing for manufactured injectable plasmid products and recommend establishing a release criterion of > 80% supercoiled content (Ref 1). Traditional agarose gel has sensitivity limitations in detecting low level of impurities. Capillary electrophoresis with Laser Induced Fluorescence detection (CE-LIF) provides a rapid, sensitive, reproducible and automated method for the quantitative analysis of plasmid DNA isoforms. In this technical note, we describe the development of a method for plasmid analysis by CE-LIF with the use of a common dye. Results obtained with two large plasmids at 7 to 10 kb demonstrate that this method is sensitive and robust, providing baseline resolution of supercoiled, open-circular and linear plasmid isoforms within 20 minutes. It is suitable for both testing plasmid purity and monitoring plasmid degradation. 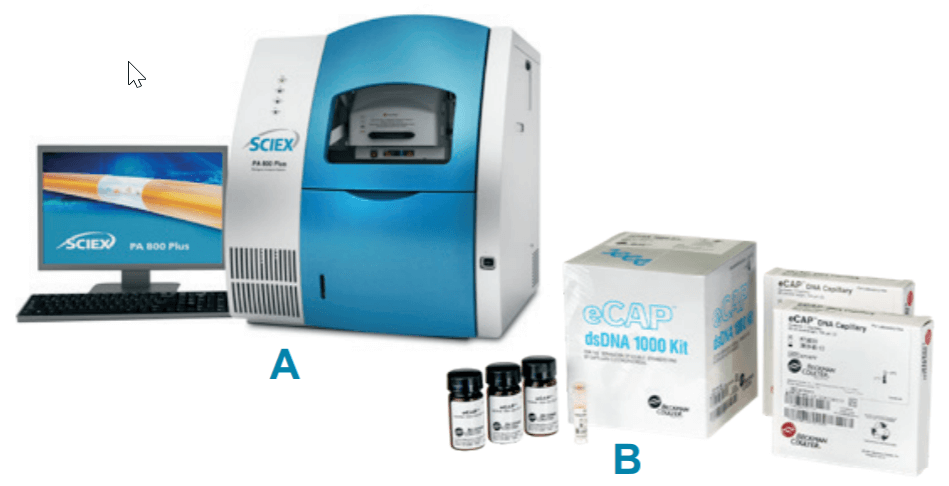 Gel Buffer reconstitution: To rehydrate the gel buffer, 20 ml of 0.2 µm filtered deionized water was added to the gel buffer vial. The mixture was gently stirred with a small stirring bar for up to 24 hours or till the dried gel was completely dissolved. Then, the gel solution was diluted in 1X TBE (90 mM Tris, 90 mM Borate, and 2 mM EDTA pH 8.3) at a dilution factor indicated in Results section. The diluted gel was filtered through a 0.45 µm filter. 1x TBE was prepared by a 10x dilution of TBE stock solution with deionized water followed by passing through a 0.2 µm filter. LIFluor EnhanCE stain was added to the gel at a concentration of 5 μl stain in 6 ml gel. Alternatively, SYBR Gold was added to gel at the amount of 1 µl in 10 ml gel.

Cartridge Assembly: DNA capillary was installed per instruction of kit insert (PN 726412) in the dsDNA 1000 kit. The total capillary length was 40.2 cm with 30 cm as the length to detection window. 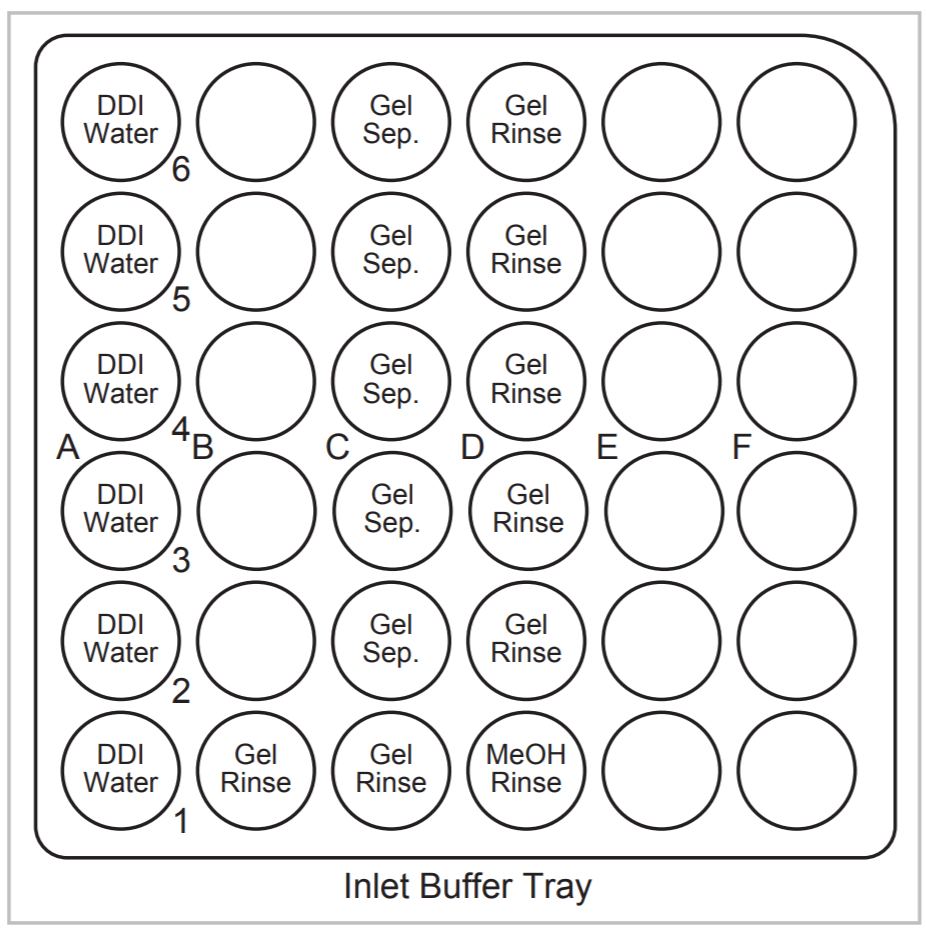 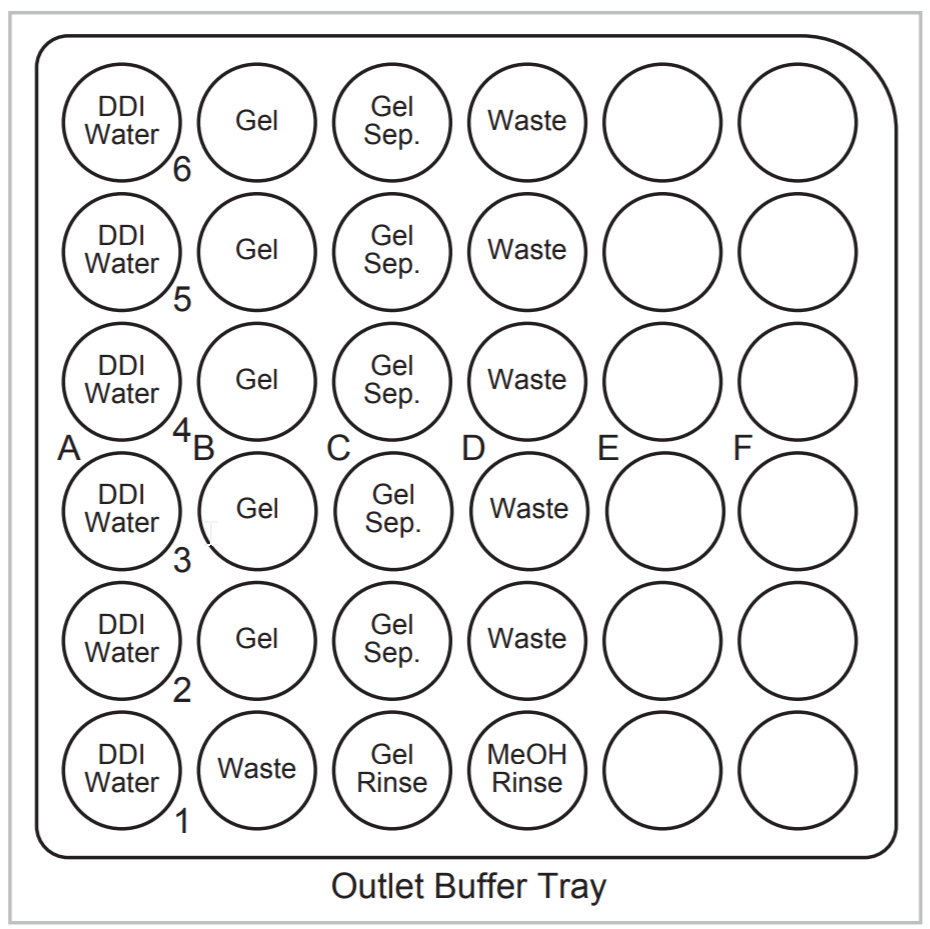 Capillary Condition Time Program: Capillary condition method was performed at the beginning of each sequence. Routine conditioning was done at 10 psi for 10 min with Gel/1x TBE/ dye buffer. If a new capillary was used, conditioning was done by rinsing six to eight times at 10 psi for 20 minutes with Gel/1x TBE/dye buffer. With optimized method using SYBR Gold, a 10 min rinse with methanol was done before the regular gel rinse.

Shutdown Method Time Program: Shutdown method is performed at the end of each sequence. The capillary was rinsed with Gel/1x TBE/dye buffer at 10 psi for 20 minutes. The capillary was stored on the instrument at 20º C overnight or at 4º C for 2 to 3 days between runs. With optimized method using SYBR Gold, a 2 min rinse with methanol was done before the regular gel rinse.

Separation Method: Time programs for plasmid separation methods are listed in Figures 6, 7 and 8.

Agarose Gel Electrophoresis: A 1% agarose gel in TAE (Tris, Acetate EDTA, pH 8.3) that contained ethidium bromide at concentration of 0.5 µg/ml was used for analysis of plasmid samples. After the samples were loaded, electrophoresis was carried out at 80 to 150 Volts for 60 min.

Plasmid analysis by agarose gel: Agarose gel was used for analysis of plasmid topology. In Figure 9, 200 ng of a plasmid sample (Lane “P2”) was run on a 1% TAE agarose gel containing ethidium bromide (PN 161-0433, BioRad). About 835 ng of 1 kb plus DNA ladder (PN SM1331, Thermo) was loaded in Lane “M”. The super-coiled (SC) and open circular (OC) forms generated good, sharp bands. The linear (L) and multimer forms were barely detectable. Therefore, although the agarose gel method is easy to do, it has a high detection limit. A capillary electrophoretic method would improve sensitivity in detection, providing automated quantitative analysis. 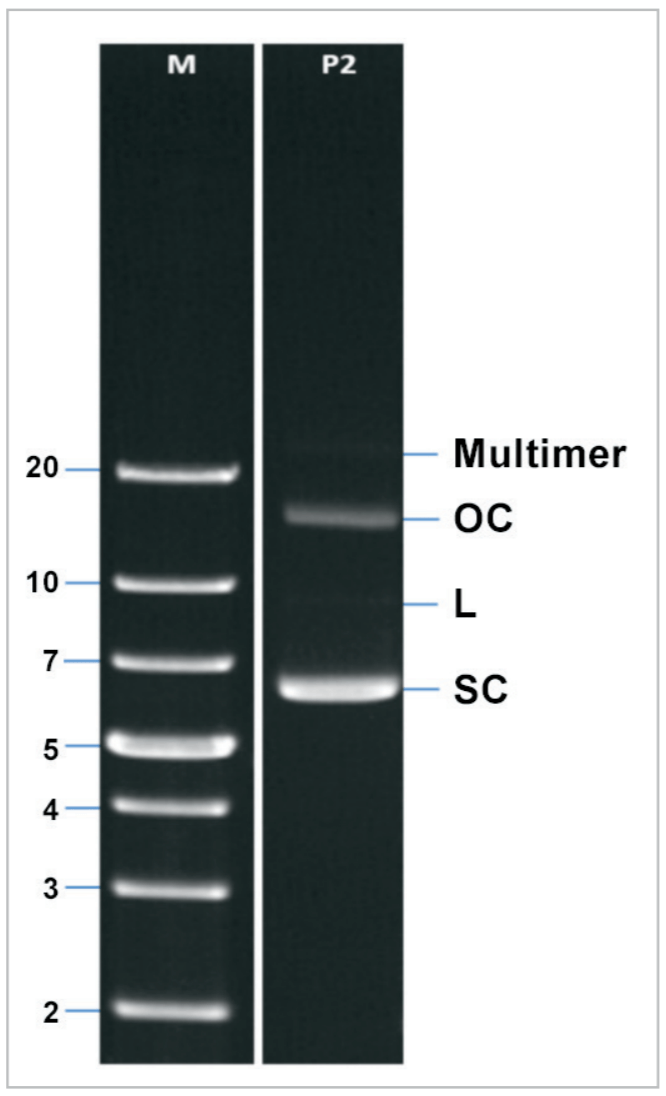 Optimization of Sample Injection and Separation Matrix Conditions: Although different plasmid DNA topoisoforms have similar molecular weights, their tertiary structures are different, allowing the gel buffer to sieve. Sieving was achieved by diluting the gel buffer to obtain the best resolution. During initial experiments, the gel buffer was diluted with 1xTBE at dilution factors of 5x, 7x, 10x, 15x and 20x. It was determined that gels diluted at 7x and 10x generated the best results (Figure 10A and 10B). The 10x dilution gel was used for further optimization experiments from this point on. 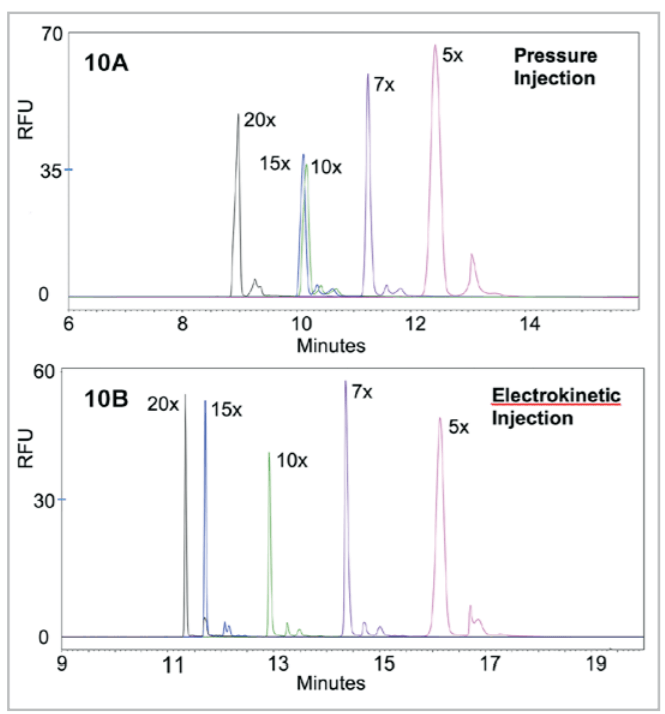 Figure 10. Varying gel dilution with pressure (0.2 psi for 4 sec; Panel 10A) or electrokinetic (2 kV for 5 sec, Panel 10B) injections. LIFluor EnhanCE stain and pDNA1 (7 kb) were used in this experiment. 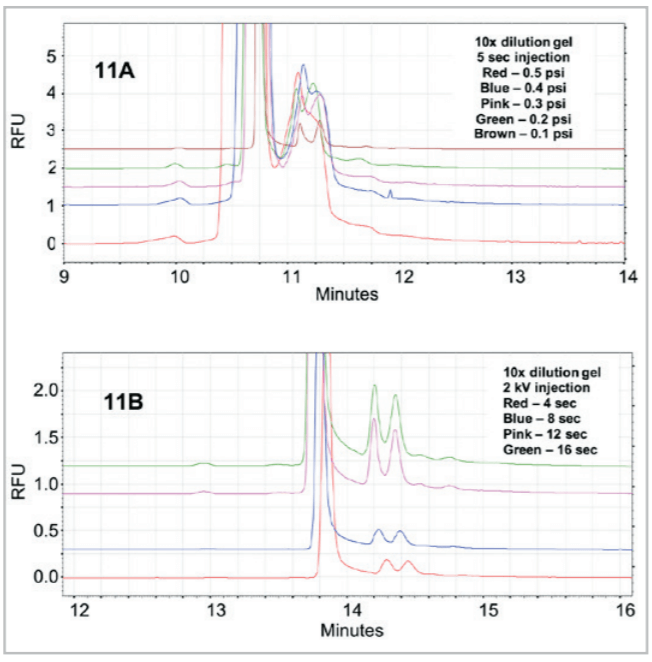 Figure 11. Effect of varying injection pressure (Panel 11A) and varying electrokinetic injection time (Panel 11B). LIFluor EnhanCE stain and pDNA2 (10 kb) were used in this experiment. 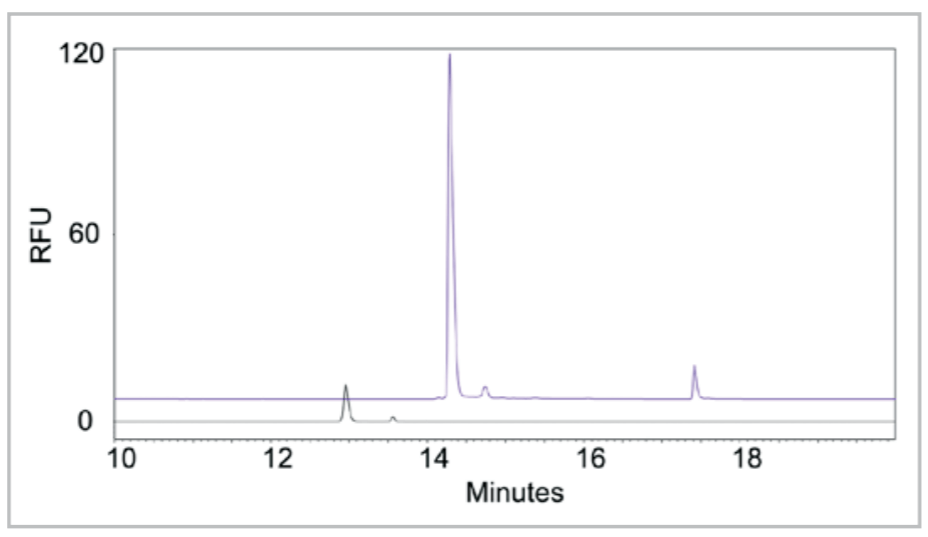 CE for Plasmid Stability Monitoring: pDNA1 (7 kb) and pDNA2 (10 kb) were stressed at 40° C to produce different isoforms. Samples were then analyzed by different topology methods: capillary gel electrophoresis (CGE) and agarose gel electrophoresis (AGE). Results in Figures 2 and 13 were obtained with pDNA1 (7 kb). Data in these two figures indicate CGE can show topology changes. The supercoiled form decreased while open circular form increased over stress treatment (Figure 2). Results from CGE were consistent with those from AGE (Figure 13). The topoisoform percentages were not affected by the methanol rinse in CGE (Figure 13). Similar results were also obtained with pDNA2 (10 kb) (Data not shown). 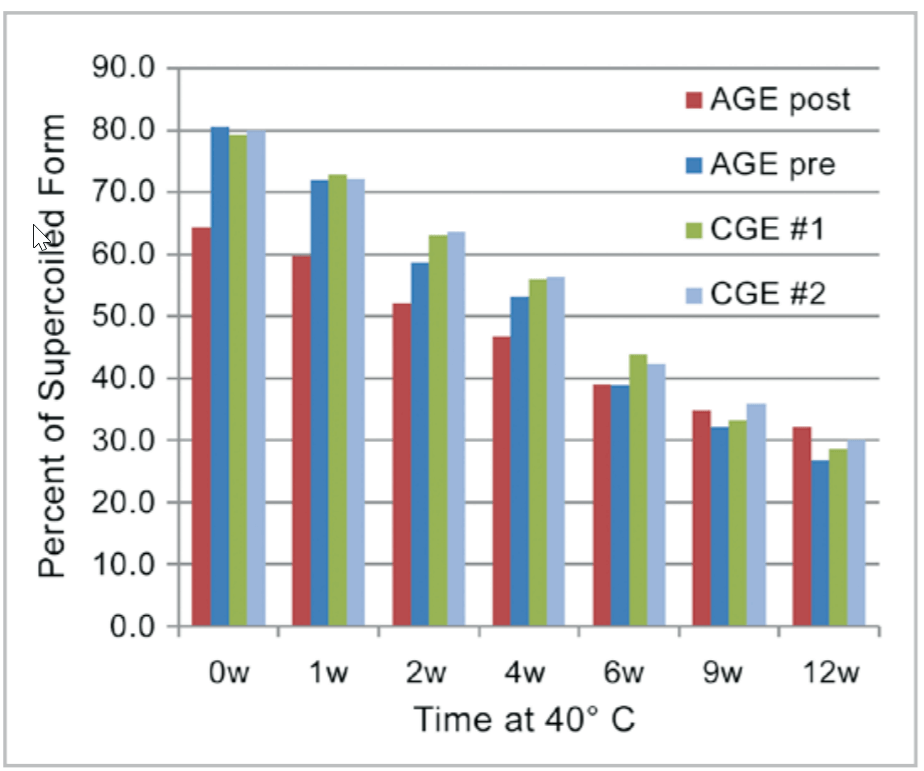 Figure 13. Robustness in monitoring degradation of pDNA1 (7 kb) samples stressed at 40° C for zero (T0) to 12 weeks (T12). CGE #1 is no methanol rinse and CGE #2 included methanol rinse. “AGE post” was stained after running while “AGE pre” contained stain in the agarose gel.

Robustness: Further optimization involved adding methanol rinse as the first step in conditioning. Methanol rinse improved consistency of separation profiles, extending the capillary life to over 100 runs from under 100 runs. Robustness of optimized method was tested by running the same sample multiple times. Results in Figure 14 demonstrates consistent peak profiles for 21 consecutive runs with different topological isoforms baseline resolved. Percent RSD values of time corrected area for the supercoiled and the open circular peaks were below 8%.