Analyze on an LC timescale using the ZenoTOF 7600 system

Electron activated dissociation (EAD) on the ZenoTOF 7600 system is used for the complete structural elucidation of glycerophospholipids, sphingolipids, and acylglycerols in a single experiment. In contrast to the more commonly used collision induced dissociation, or CID, EAD provides an abundance of unique fragment ions critical for complete lipid characterization. 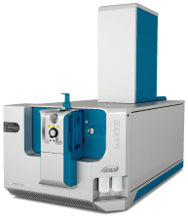 The field of lipid research has grown immensely in recent decades. Lipids were initially thought to simply be structural components of cellular membranes, but the ongoing study of lipids and their functions has shown these diverse molecules are very active participants in many biological processes. Recent studies have shown lipids to play direct or causal roles in many human disease states, such as Alzheimer’s, metabolic syndrome and lysosomal storage disorders.1 They have also been used as potential biomarkers. For instance, a shift in the double bond from a ∆7 to ∆9 in a phospholipid has the potential to be a biomarker for breast cancer,2 and a change in the sn-1 and sn-2 positions of an acyl chain in phosphatidylinositol has the potential to be a marker in urine for prostate cancer.3

Lipids have also garnered a lot of attention in the delivery of vaccines, genetic material and other small molecules. Lipid nanoparticles (LNPs) are a novel drug delivery system consisting of a lipid outer shell with the drug encapsulated in the center. LNPs have now been approved for several therapies as well as for the SARS-CoV-2 vaccines mRNA-1273 (Moderna) and BNT162b2 (BioNTech).4

Although lipid species generally fall into classes that share specific subgroups and configurations, the diversity of lipid molecules is enormous. Characterization of lipids must not only include the identification of molecular composition but also details about individual components such as class, head groups, lengths of different fatty acids, modifications, attachment points, numbers and positions of double bonds, and even cis/trans configurations. As a result, the complete structural elucidation of lipid molecules has generally been an arduous task composed of a series of characterization steps that use different methodologies.

Here, electron activated dissociation (EAD) on the ZenoTOF 7600 system is used for the complete structural elucidation of glycerophospholipids, sphingolipids, and acylglycerols in a single experiment. In contrast to the more commonly used collision activated dissociation, or CAD, EAD provides an abundance of unique fragment ions critical for complete lipid characterization. 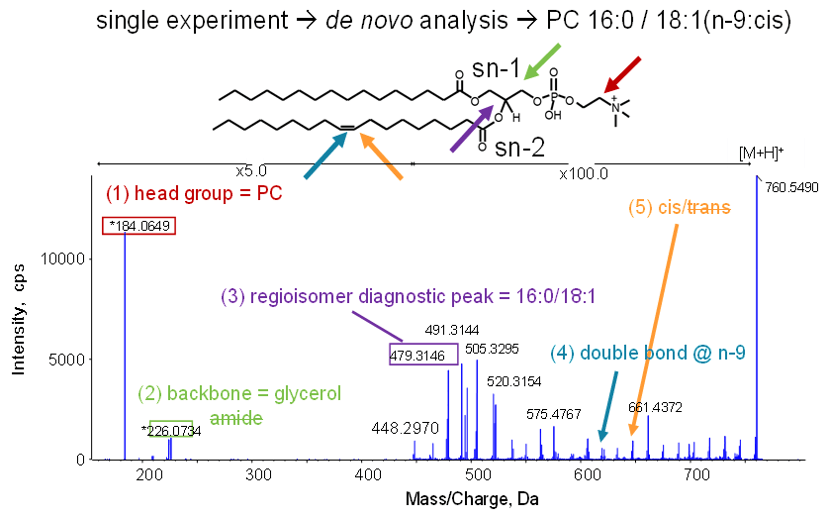 The challenge of lipid characterization

The LIPID MAPS consortium classifies lipids into 8 different categories: (1) fatty acyls, (2) glycerolipids, (3) glycerophospholipids, (4) sphingolipids, (5) sterol lipids, (6) prenol lipids, (7) saccharolipids and (8) polyketides. Within each category are sub-categories specifying details about the lipid structure. For example, for glycerophospholipids, the following subcategories must all be ascertained for complete structural elucidation:

When considering all of the different combinations that can be created using items from each of these sub-categories, ~10,000 unique glycerophospholipid species are possible. If fatty acid modifications are considered, the possibilities are even greater. As an example, for the lipid specified at the sum composition level of PC 34:1, there are 40 different permutations possible for this lipid species alone, as illustrated in the online animation. This requires a time-consuming and labor-intensive approach to fully characterize this species employing multiple analytical technologies and experiments such as those outlined in Figure 2.

Figure 2: The many layers of lipid structural specificity. Currently, no single commercial technology can fully characterize a lipid. Multiple different technologies, platforms, and experiments are required. Alternatively, the ZenoTOF 7600 system using EAD can obtain all the information outlined above in yellow font within a single experiment, enabling complete classification of lipids.

Using the ZenoTOF 7600 system and EAD fragmentation, ALL the information in yellow font from Figure 2 is obtained in one EAD experiment. As shown in Figure 1 for the same glycerophospholipid previously discussed (PC 34:1), a single Zeno EAD experiment identifies the lipid class, head group, types of fatty acids, fatty acid attachment points (regioisomerism), existence and location of a double bond. It also shows whether it is cis or trans configuration, to reveal the fully characterized lipid species as PC 16:0 / 18:1(9Z)).

Lipid head groups vary widely in their chemistries, enabling them to influence different structural features such as cell membrane flexibility and permeability as well as to mediate various biological functions such as substrate transport and cell signaling. Identification of a lipid head group is one of the more straightforward tasks performed for lipid characterization as a unique fragment ion is still observed in Zeno EAD.

In order to differentiate these two lipid classes, fragment ions corresponding to the attachment point of the choline head group to the lipid backbone are examined. With glycerophospholipids, a glycerol unit resides at the center of the molecule and head groups are attached to one end. EAD produces two diagnostic fragment ions: m/z 224 containing a carbon atom and m/z 226 with an oxygen atom for the glycerol backbone (Figure 3, bottom). This doublet is a unique identifier for phosphatidylcholines. With sphingomyelins, however, instead of a glycerol backbone, the long-chain amino alcohol sphingosine resides at the center of the molecule. EAD breaks the amide bond producing a fragment ion with m/z 225 containing the amide nitrogen atom (Figure 3, top). Additional unique diagnostic fragment ions as outlined in several recent publications serve to further differentiate and characterize lipid species within these classes.6,7 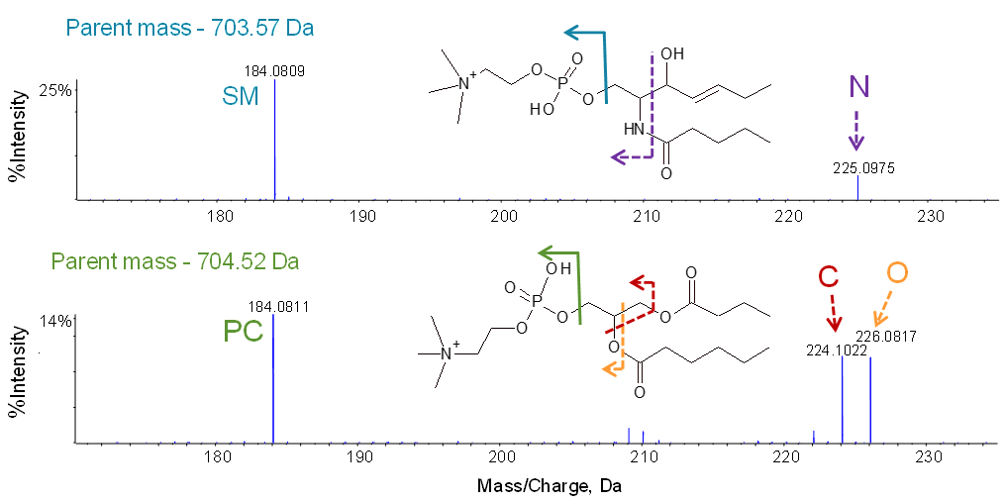 Glycerolipids and glycerophospholipids can have their fatty acid chains connected at several different attachment points designated as sn-1, sn-2, and sn-3 (“sn” for stereospecific numbering). While these structures can seem very similar, in recent years it has become increasingly apparent that different regioisomers can have very different physical and biological properties. Thus identification of attachment points is now a vital part of lipid characterization.

Figure 4 shows the Zeno EAD spectrum for a triglyceride standard where two of the three fatty acids are identical (18:1(N12Z)) and the third contains a shift in a double-bond position (18:1(N-9Z)). The sn-1, sn-2, or sn-3 attachment point for each of the fatty acids can be differentiated by examining the dual chain loss fragment which still contains the remaining fatty acid itself and its attachment point. Two different fragmentation patterns are observed for each regioisomer as described in a recent publication.8 In the case of an sn-2 attachment, the dual cleavage points for both patterns result in identical products with the same mass. Thus only a single fragment peak is observed. However, in the case of an sn-1 or sn-3 attachment, the dual cleavage points occur after carbon (for one pattern), and after a carbon and an oxygen (for the other pattern). Thus, a pair of peaks is observed with the lower-mass ion more intense. Additionally, the 1.98 Da difference between the paired peaks indicates that the lighter fragment contains a CH2 group and the heavier fragment contains oxygen instead of the CH2 group. 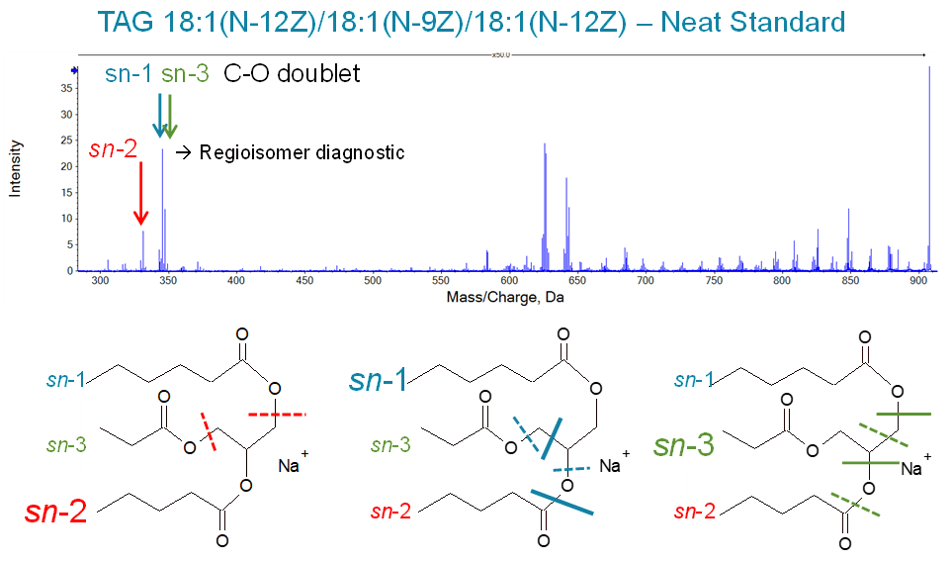 Figure 4. Differentiation of regioisomers. The sn-2 attachment point can be differentiated from the sn-1/sn-3 position through examination of the dual chain loss fragment ions. For sn-2, a single fragment ion is observed because all fragmentation patterns result in the same molecular formula for the product ion. In contrast, for attachment through the sn-1 or sn-3 position, a pair of fragment peaks are observed with one cleavage pattern terminating in a methylene group (-CH2-) and the other pattern terminating in oxygen.

The fatty acid residues attached to lipid molecules are one of the fundamental components that drive biological activity. These long carbon chains can vary greatly in length and can be fully saturated or contain areas of unsaturation with single or multiple double bonds. Since the chain length as well as the presence and location of any unsaturation can greatly affect both the lipid structure and function, full characterization of the fatty acid portion is essential for understanding biological activity.

The difference in mass between the dual chain loss fragments (discussed in the previous section) and the intact precursor ion provides information regarding the number of carbons within each chain, and whether or not there are any double bonds. In addition, EAD also produces a rich set of chain fragments originating from the intact precursor ion with sequential loss of CH2 from the fatty acid backbone. These fragments generally span the entire length of the fatty acid chains and help to confirm the lengths of the chains themselves. Inspection of the peak pattern observed at each sequential carbon loss can reveal the location of a double bond.

Figure 5 shows the two-dimensional elution profile of a complex lipid mixture extracted from C2C12 myotubes. Data were generated using information dependent acquisition (Zeno IDA) to collect EAD MS/MS on the fly, coupled with normal phase chromatography for lipid class based separation. This sample contains a rich mixture of many different lipid species that can be visualized simultaneously using IDA Explorer. Here the C2 ladder that is common when looking at lipid elongation (addition of 2 carbons) is clearly observed. Each blue box encloses sets of lipids differing by 2 carbons. Within each set (blue box) different lipid species with varying degrees of unsaturation are shown eluting at different time points. This study provided near total lipid characterization from this complex mixture via LC-MS/MS with the identification and characterization of many common and less common lipid species including plasmalogens and ether linkages of phosphatidylcholines and multiple adducts.

As an example of the complete information provided by EAD, even on a fast LC-MS/MS time scale, Figure 6 shows the lipid from Figure 5 circled in red. The higher mass region is expanded in order to show the details for the fatty acid chain fragments. Sequential loss of carbon from the precursor ion is clearly observed as tight groups of peaks separated by 14 Da (-CH2-). When a double bond is observed in the chain length the characteristic 12 Da (-C=) difference is observed. 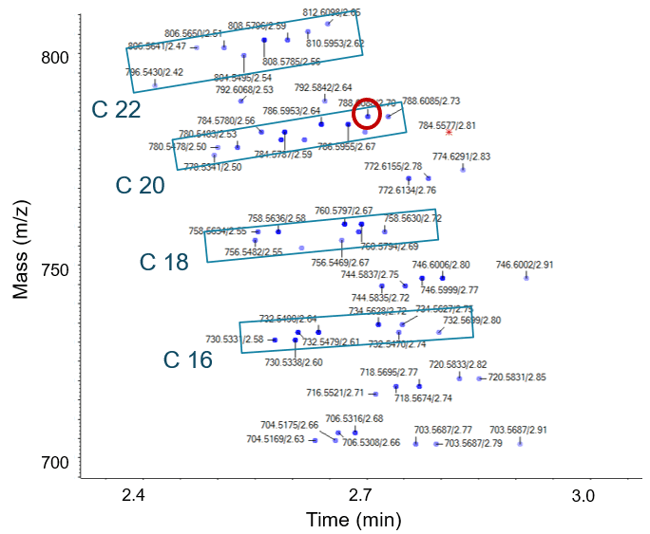 Perhaps one of the most difficult structural entities to elucidate for an unsaturated fatty acid is whether cis or trans stereochemistry exists around the double bond. Cis configurations, also referred to as “Z” (from the German zusammen) will have important structural components aligned along the same side of the double bond whereas trans configurations or “E” (from the German entgegen) will have them on opposite sides. Using EAD, the peak ratios generated by the fragmentation of the C-C single bonds next to the double bond can be used to determine cis or trans configuration. Specifically, on the methyl terminal side of the carbon chain, the radical fragment and the hydrogen loss non-radical fragment have different intensities between cis and trans isomers. These peak intensity ratios at a fixed kinetic energy can graphically illustrate the stereochemistry of these double bonds (data not shown) and are described in more detail in Baba et al. (2017).9 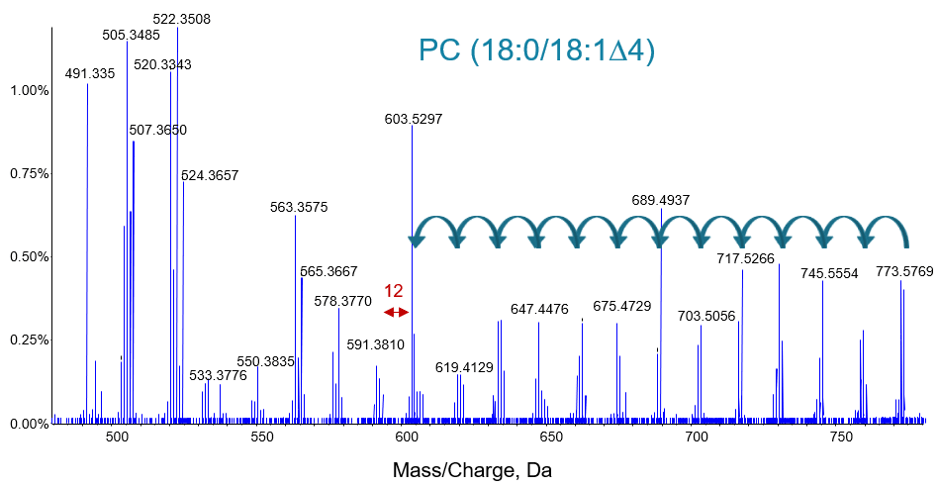 Figure 6. EAD MS/MS spectrum for an unsaturated lipid. The higher mass region is expanded to show fragmentation of the alkyl chain. The location of the double bond can be found by examining the set of peaks generated for each carbon loss. In addition, the intensities of these fragments will typically be lower for the peaks corresponding to the double bond position.

A new methodology for the complete characterization of lipids is described that uses electron activated dissociation (EAD) on a ZenoTOF 7600 system. The rich MS/MS data produced with EAD contains unique fragment ions with patterns and intensities that can be used for complete structure elucidation. Additionally, the EAD experiment when combined with the Zeno trap is sensitive, reproducible and fast, enabling on-the-fly characterization of lipids from complex mixtures during LC separation.