The cytochrome P450 protein superfamily of mono-oxygenases is the major phase-I enzyme system responsible for metabolism of most drugs and other foreign chemicals, frequently resulting in the formation of toxic drug metabolites. In higher eukaryotes, there are over 70 families of P450s involved in drug metabolism, comprising over 200 different isoforms, with diverse substrate specificities and inducible by different drugs or chemicals. These proteins share substantial sequence homology making quantification of specific isoforms challenging.

Quantitation of proteins by Multiple Reaction Monitoring (MRM) requires selection of peptides which are unique to the sequence of the protein of interest. When a protein is part of a protein family with very high sequence similarity, this can often restrict the choice of unique peptides for quantification to those that are not proteotypic, and are present at lower abundance. Therefore, having an additional level of selectivity in the MS quantification methods can be of upmost importance for the analysis of similar protein isoforms in complex matrices. The MRM3 workflow1 that is possible on the QTRAP Systems is a high selectivity method that provides additional specificity by monitoring the secondary product ions of a peptide of interest, rather than just the product ions (Figure 1). In this work, the CYP450 3A5 protein (which shares ~80% amino acid sequence identity with isoform 3A4) is specifically quantified in liver microsomes by monitoring unique peptides to 3A5 protein. 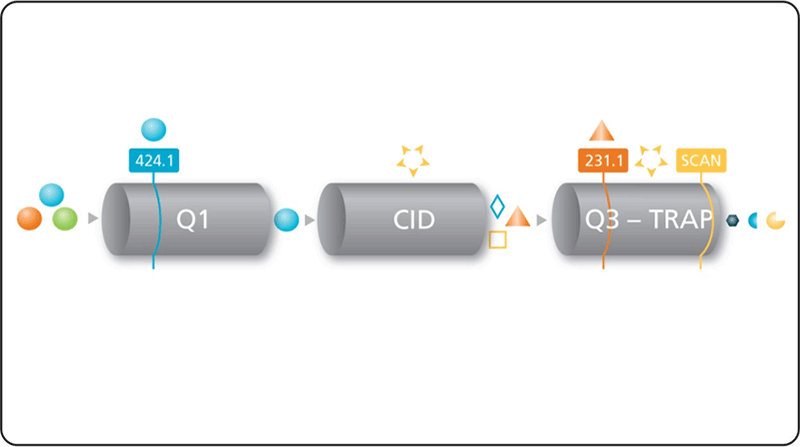 Key features of the QTRAP 4500 System for peptide quantification

Sample preparation: Synthetic tryptic peptides to the CYP450 3A5 protein (both isotopically heavy and light) were used to design MRM and MRM3 assays (Figure 2). Standard concentration curves were constructed using the standard peptides in digested human liver microsomes (~1 ug of protein matrix on column). Light peptides were added as an internal standard and heavy labeled peptides dosed at levels between 305 amol to 805 fmol on column.

Chromatography: Analysis of peptide quantitation curves was performed on a nanoflow LC system in trap elute mode. In each injection, sample was desalted on a 200 µm x 6 mm trap and then eluted onto a 200 µm x 150 mm column for MS analysis. Both the trap and column chips were filled with ChromXP™ C18-CL 3μm 120Å reversed phase material. Peptides were separated using a linear gradient formed by A (2% ACN, 0.1% FA) and B (98% ACN, 0.1% FA) from 10–30% of B over 45 minutes at a flow of 1 µL/min.

Mass spectrometry: The MS analysis was performed on a QTRAP 4500 System (SCIEX) using MRM and MRM3 analysis. MRM analysis was performed at Unit resolution in both Q1 and Q3 quadrupoles. MRM3 analysis was performed using the MS/MS/MS scan function. Precursor ions were isolated in Q1 using unit resolution, first-generation product ions were generated in the Q2 collision cell using an optimized collision energy and trapped in the Q3 linear ion trap for 100 ms. A suitable first-generation product ion was isolated and further excited by resonance excitation for 25 ms to produce second-generation fragments, which are scanned out of the trap at 10000 Da/sec for a total cycle time of 1370 ms per peptide.

When a peptide is fragmented in the collision cell, a number of product ions are generated that can be assessed for use in MRM3 experiment (Figure 2, top). For the DTINFLSK peptide, the dominant y5 ion was isolated and fragmented in the linear ion trap to generate an MS3 spectrum (Figure 2, middle). Multiple secondary product ions are extracted using a width of 0.5 Da and summed together to produce the MRM3 signal shown (Figure 2, bottom). Integration of the resulting peak provides the quantitative data.

Figure 2. MRM3 assay design. A dominant product ion from the MS/MS spectrum (top) is selected for MS/MS/MS analysis (middle). Multiple product ions can be assessed to find which produces the best secondary product ion spectrum. Analysis of the MS3 fragmentation is used to optimize the excitation energy and select the best second-generation fragments to extract and use in quantitation. Multiple second-generation fragments can be used to generate MRM3 XICs (bottom). Data shown here is for the CYP450 peptide DTINFLSK, at 4.9 fmol on column.

The MRM3 workflow provides further specificity compared to MRM alone due to the additional level of selectivity obtained by monitoring secondary product ions. Three MRM transitions for the peptide DTINFLSK are shown at 4.8 fmol on column in Figure 3, top. Higher flow rates provided by the 200 µm cHiPLC column yield good peak shape; however, 2 of the 3 transitions showed significant interferences. The MRM3 data shows much better specificity (Figure 3, bottom). A similar observation was made for the SLGPVGFMK peptide, where two of the three monitored MRM transitions showed some interference, but the MRM3 data was very clean (Figure 5).

Concentrations curves for two peptides to the CYP 3A5 protein were generated in digested liver microsomes using heavy isotope labeled peptide standards. Both MRM and MRM3 assays were performed, and lower limits of quantitation (LLOQ) determined by processing in MultiQuant Software. For both peptides, the MRM3 assay provided lower limits of quantitation than the MRM assay. Quantitation limits of 1.2 fmol were obtained for MRM3, and actual signal at this level is shown in Figure 4 and 6, bottom. Good linearity was obtained across the concentration range interrogated – from LLOQ of 1.2 fmol to 805fmol on column in 1 µg of digested protein (Figure 4 and 6, top). 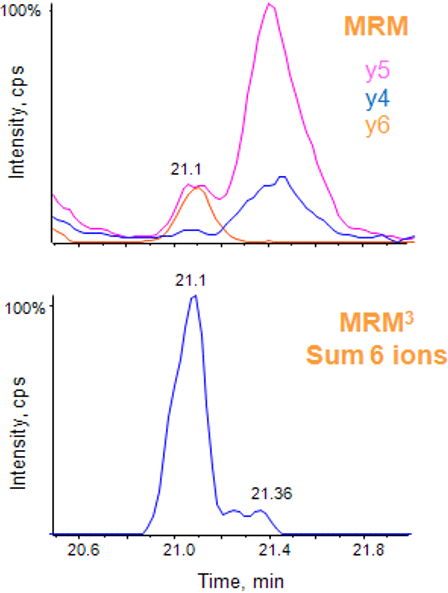 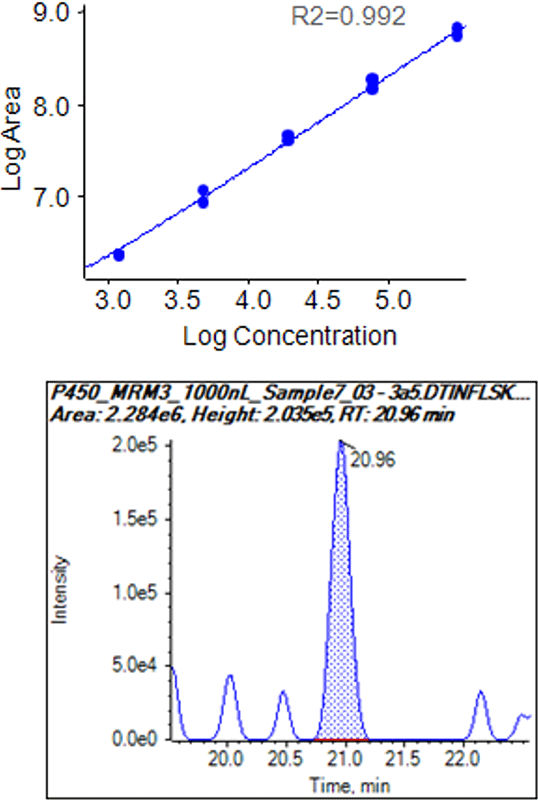 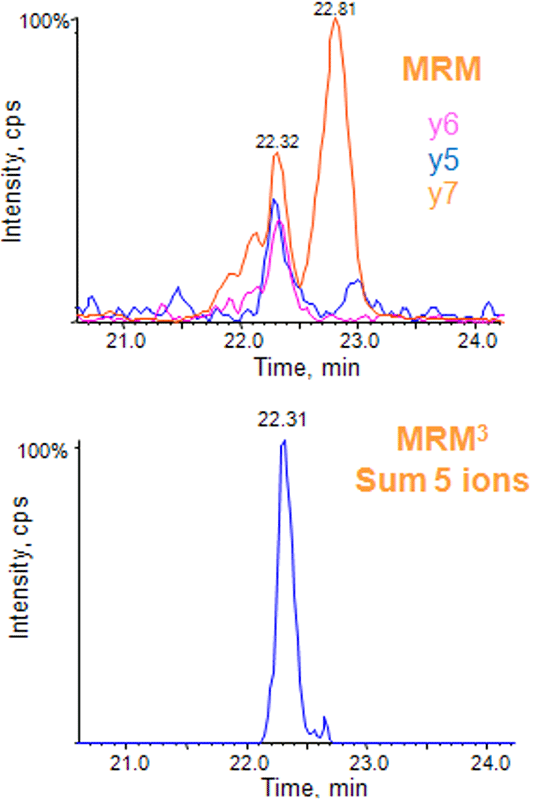 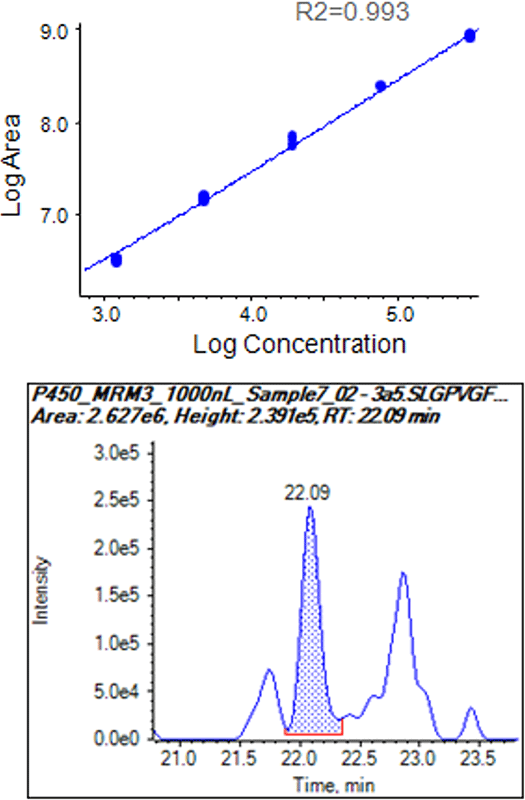 The quadrupole selectivity and linear ion trap sensitivity of the QTRAP 4500 System combine to produce a sensitive, flexible system for targeted peptide quantitation. MRM transitions designed for tryptic peptides to a protein are the standard method for quantitation of proteins by mass spectrometry. While MRM transitions can be very sensitive and selective, sometimes added selectivity is required due to the complexity of the matrices and the need to monitor unique low abundance peptides.