A robust method was developed using SCIEX QTRAP 4500 system for the quantification of Aflatoxin M1 in milk. The method was validated as per the European commission, where the regression coefficient is greater than 0.99 and the % CV at the LOQ and LOD level is below 5%. 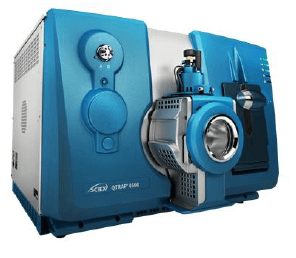 Milk is a very healthy, nutritious food, full of key nutrients for growth. In 2018, about 66.8 million metric tons of milk were consumed in India and an average of 30 million metric tons of milk were consumed in Europe and the United states. One of the major forms of contamination that can be found in milk are mycotoxins, which are toxic compounds produced by certain fungi that can have serious health effects even at very low concentrations.1,2 Regular consumption of aflatoxin M1 in children may cause stunted growth, cirrhosis and cancer. Considering its serious effects in pediatrics, every government has set up stringent monitoring of aflatoxin M1 in milk and its products. India as well has thus tightened the inspection of the toxins in milk samples. However, the determination of this mycotoxin in the milk samples is very difficult due to the complexity of the matrix (fat, proteins, carbohydrates, etc.).

A robust method was developed using the SCIEX QTRAP 4500 system coupled with an ExionLC system for the targeted quantification of aflatoxin M1 in milk samples. 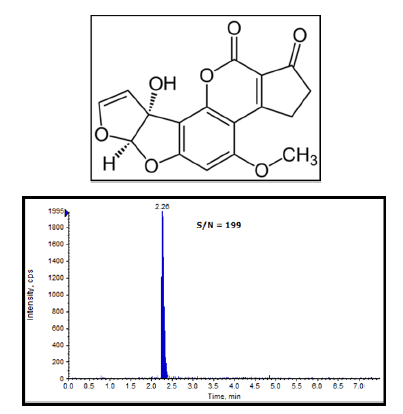 Sample preparation: Standard aflatoxin M1 was purchased from Sigma Aldrich. All other chemicals used were commercially available and of LC-MS grade. Milk samples were purchased from local vendors and were stored in the refrigerator at 2 to 8 °C until sample analysis.

An optimized extraction procedure was developed in which 5 mL of milk was mixed with 10 mL of acetonitrile and vortexed for 10 min. Then, 2 g of NaCl was added, vortexed for 5 min and centrifuged at 3200 rpm for 5 min at 4 °C. The organic layer was collected and evaporated to dryness under nitrogen. The residue was reconstituted with 1 mL with 90:10 water/methanol, filtered and transferred into autosampler vials for LC-MS/MS analysis.

Mass spectrometry: The SCIEX QTRAP 4500 system was operated in multiple reaction monitoring (MRM) mode. The Turbo V ion source was used with an electrospray ionization (ESI) probe, in positive polarity at an ion spray voltage of 2800. The MRM transitions used are shown in Table 2. Analyst software 1.7 was used for method development and data acquisition.

First, the chromatography was optimized to provide a fast 7.5 min run time (Figure 1). Calibration curves were generated across a concentration range of 0.15 to 1.50 ppb of aflatoxin M1 in extracted milk matrix to determine the performance of the method. A LOD of 0.15 ppb was achieved in extracted milk and the %CV (n=10) was still <5%. Good linearity across the range was observed (Figure 2). Reproducibility was evaluated between and within days  with the 6 replicates injections and the %CV was found to be <5%, which proves the method is robust and reproducible below its MRL level (0.50 ppb) (Figure 3, bottom). No significant matrix interferences were observed (Figure 3, top). Ion ratios were used to ensure that the correct peaks were integrated in each sample, for added confidence in detection (Figure 4).

Figure 2. Calibration curve of aflatoxin M1 in milk. Good linearity was achieved for the concentration range evaluated (0.15 to 1.50 ppb) with r values >0.99 for both MRM transitions, with 1/x2 weighting. Good reproducibility was observed for aflatoxin M1 in extracted samples at the LOD level of 0.15ppb, 2.54 %CV for 6 replicates. 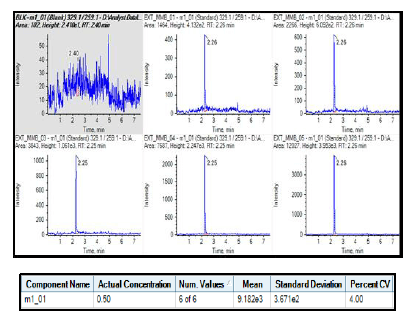 Figure 3. Representative chromatograms of aflatoxin M1. The integrated peaks for aflatoxin M1 from 0.15 ppb to 1.5 ppb are shown here, including the blank. 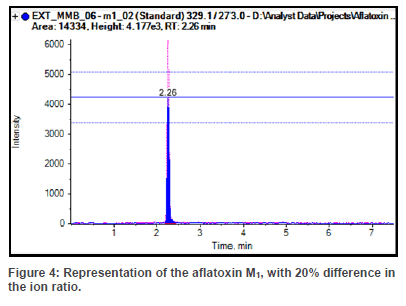 Figure 4. Representation of the aflatoxin M1, with 20% difference in the ion ratio.

The method developed here enables the fast and accurate quantification and confirmation of aflatoxin M1 in extracted milk samples by LC-MS/MS. The SCIEX QTRAP 4500 system provides good sensitivity and selectivity for this analysis, with minimal sample preparation, providing maximized throughput for the analysis of large sample batches in a short time period. The method was developed in accordance with the Commission Decision (2002/657/EC) directive recommendations and showed acceptable accuracies (70%-130%) across the calibration curves in matrix, had good linearity for both the MRM transitions and had high repeatability with %CV < 5%.

This rapid and sensitive LC-MS/MS method for the quantification of aflatoxin M1 in milk also easily meets the MRL of 0.5 ppb level for this toxin in milk.