The flexibility and reproducibility of the NanoLC™ 400 System makes it an excellent LC system for labs performing proteomics workflows, from high sensitivity protein expression analysis to high throughput peptide quantitation. With user exchangeable flow modules, the user can easily switch between the nano and microflow regimes, depending on throughput and sensitivity requirements of the experiment. And the reliability and reproducibility of the system ensures quality results for every workflow. 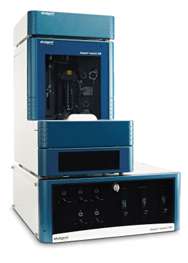 A commonly held view of the protein / biomarker research pipeline is diagrammed in Figure 1. Typically, high end mass spectrometers are used to perform non-targeted discovery experiments where the goal is to quantitatively profile large numbers of proteins across small numbers of samples to find protein targets (blue). In the next phase, this subset of proteins is analyzed across a larger set of samples. The outcome of this verification step (green) is hopefully a small subset of very promising protein markers that are then taken forward to perform large scale validation across a much larger sample size (orange), in hopes to find a small panel that provides the desired read-out.

While much focus has been on the mass spectrometry innovations, the importance of the separation component for getting the highest quality data cannot be underestimated. The sensitivity, robustness and throughput of the LC strategy must also evolve as research progresses through the pipeline. The nanoflow regime is used extensively for high sensitivity discovery experiments but more recently life science researchers are exploring the use of the microflow regime for increased throughput and robustness for quantification. The sensitivity differences between nanoflow and microflow rates are explored here with the goal of establishing general sensitivity guidelines.

Key features of the NanoLC 400 System for quantitative proteomics

In this work, four different column diameters were assessed, all containing the ChromXP C18CL (120Å, 3 μm) reverse phase media and all 15 cm in length:

Experiments were done using MRM analysis on the QTRAP® 5500 System. Concentration curves were analyzed and the lower limits of quantitation (LLOQs) were measured for each peptide on each column to compare impact of flow rate and column diameter on sensitivity. LLOQ is defined as lowest point on concentration curve with <20 %CV precision and accuracy between 80 and 120% and S/N >10.

Ten unlabeled tryptic peptides (6 Protein Mix, Michrom Bioresources) were used for this sensitivity assessment in order to establish some general sensitivity guidelines (Figure 2). The matrix used was a simple matrix so the sensitivity differences could be measured with minimal impact from interferences or ion suppression. The matrix was a Serum Albumin tryptic digest (Michrom Bioresources) at 10 fmol on column, held constant across the concentration curve. Standard concentration curves were analyzed using MultiQuant™ Software and LLOQs were computed for each peptide on each column to compare impact of flow rate and column diameter on sensitivity. The concentration range measured for each column diameter tested was 62.5 fmol down to 1.9 amoles of peptide standard. 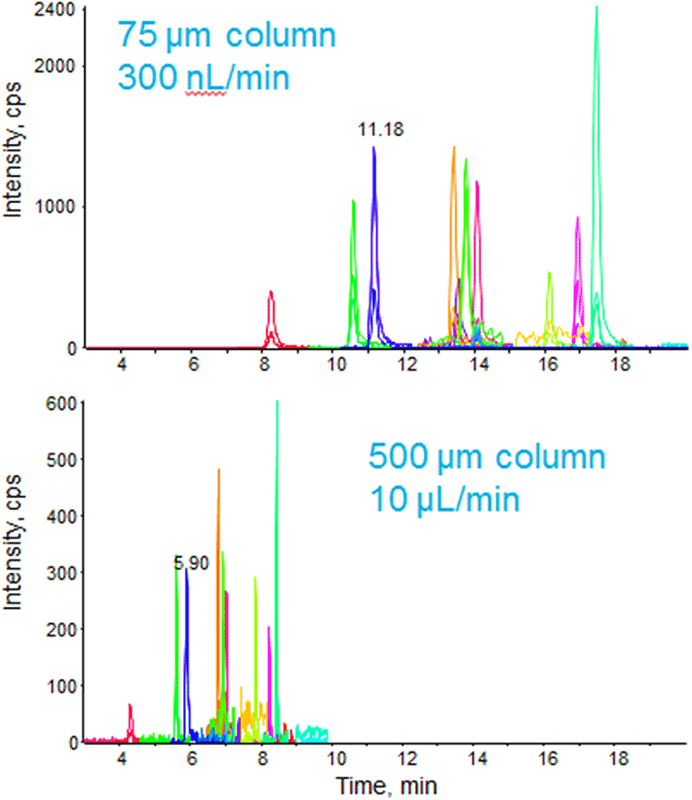 Figure 2. Comparison of the MRM traces at the lowest and highest flow rates. The MRM chromatogram for the 10 peptides from the 75 µm ID column was obtained using a 15 min linear gradient, peptides are observed from 8 – 18 mins (top). At the higher flow rates, faster gradients can be used. Analyzing the same peptides on a 500 µm ID column (bottom) shows a small decrease in sensitivity but an increase in throughput (7 minute linear gradient).

The LLOQ for each peptide was measured on each of the different columns using MRM analysis on a QTRAP® 5500 system. A set of 10 different tryptic peptides was used such that an average sensitivity difference could be determined. An example of the data acquired is shown in Figure 3, for the peptide VGDANPALQK from carbonic anhydrase. A concentration curve was run across a wide range of concentrations, the curve was assessed for linearity an reproducibility and the LLOQ was determined to be 3.8 amol on column for the 300 µm ID column.

As these averages are for only 10 different tryptic peptides, these relative differences should be used as a guidance for deciding on the right column diameter for the planned experiment. 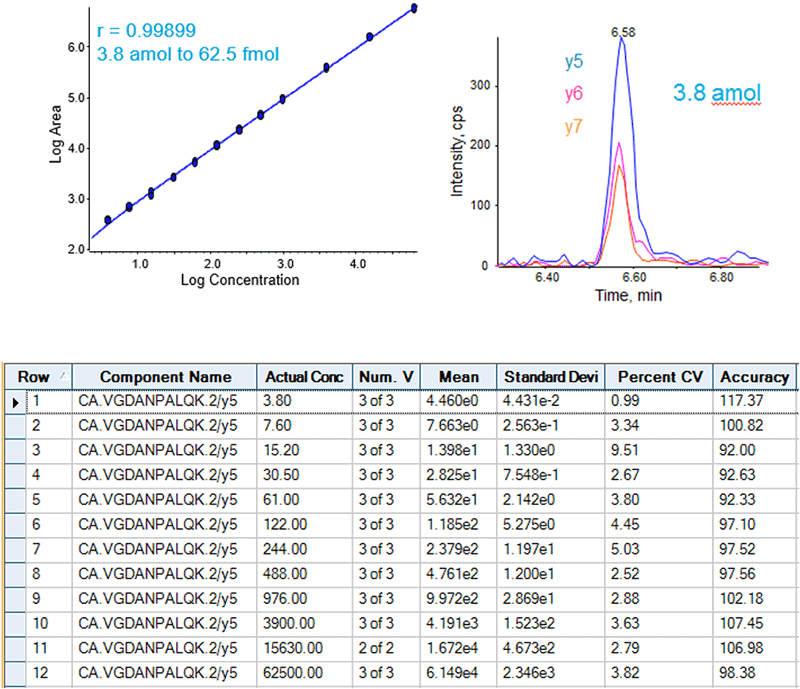 Figure 3. Measuring the lower limits of quantitation for a set of tryptic peptides. Serial dilutions were done to generate linear concentration curves of the peptide mixture and the peptides were monitored by LC-MRM. Shown is the concentration curve for the peptide VGDANPALQK analyzed on the 300 µm ID column (top left). The statistics table (bottom) illustrates the very high reproducibility achieved across the concentration range. The MRM signal for this peptide at the LLOQ of 3.8 amol on column is shown in the top right.

Table 1. Comparison of sensitivity differences between the column sizes. The LLOQ difference for each peptide at each column diameter was computed relative to the LLOQ for the 75 µm ID column, then this difference was averaged across the 10 peptides monitored.

The flexibility and reproducibility of the NanoLC 400 System makes it an excellent LC system for labs performing proteomics workflows, from high sensitivity protein expression analysis to high throughput peptide quantitation.