Sensitivity for two glycosphingolipids (GluSPH and GalSPH) were evaluated in cerebral spinal fluid using the SCIEX 7500 system. An assay was developed using HILIC chromatography and using positive MRM analysis and electrospray ionization. Calibration curves were generated on the SCIEX 7500 system as well as the QTRAP 6500+ system to assess the sensitivity difference.

GalSPH and GluSPH are useful biomarkers for several diseases such as Krabbe and Gaucher disease as well as being a potential marker for carriers of heterozygous mutated GBA1 gene, which increases the risk of Parkinson’s.1,2 Therefore, it is important to be able to accurately monitor these compounds within the brain. Cerebral spinal fluid (CSF) is analyzed for GalSPH and GluSPH due to being the closest matrix available to monitor changes in the brain. However, the volume available is extremely limited as typically several biomarker assays need to be performed on a single sample. Therefore, it is important to have as much sensitivity as possible to ensure that lower volumes of CSF can be used.

Currently, this analysis is performed by Ardena Bioanalysis Assen using the SCIEX Triple Quad 6500+ system but, due to the increased sensitivity available with the SCIEX 7500 system, a comparison study to evaluate impact was performed. The objective was to assess whether the increase in sensitivity allows for lower CSF volumes to be analyzed. 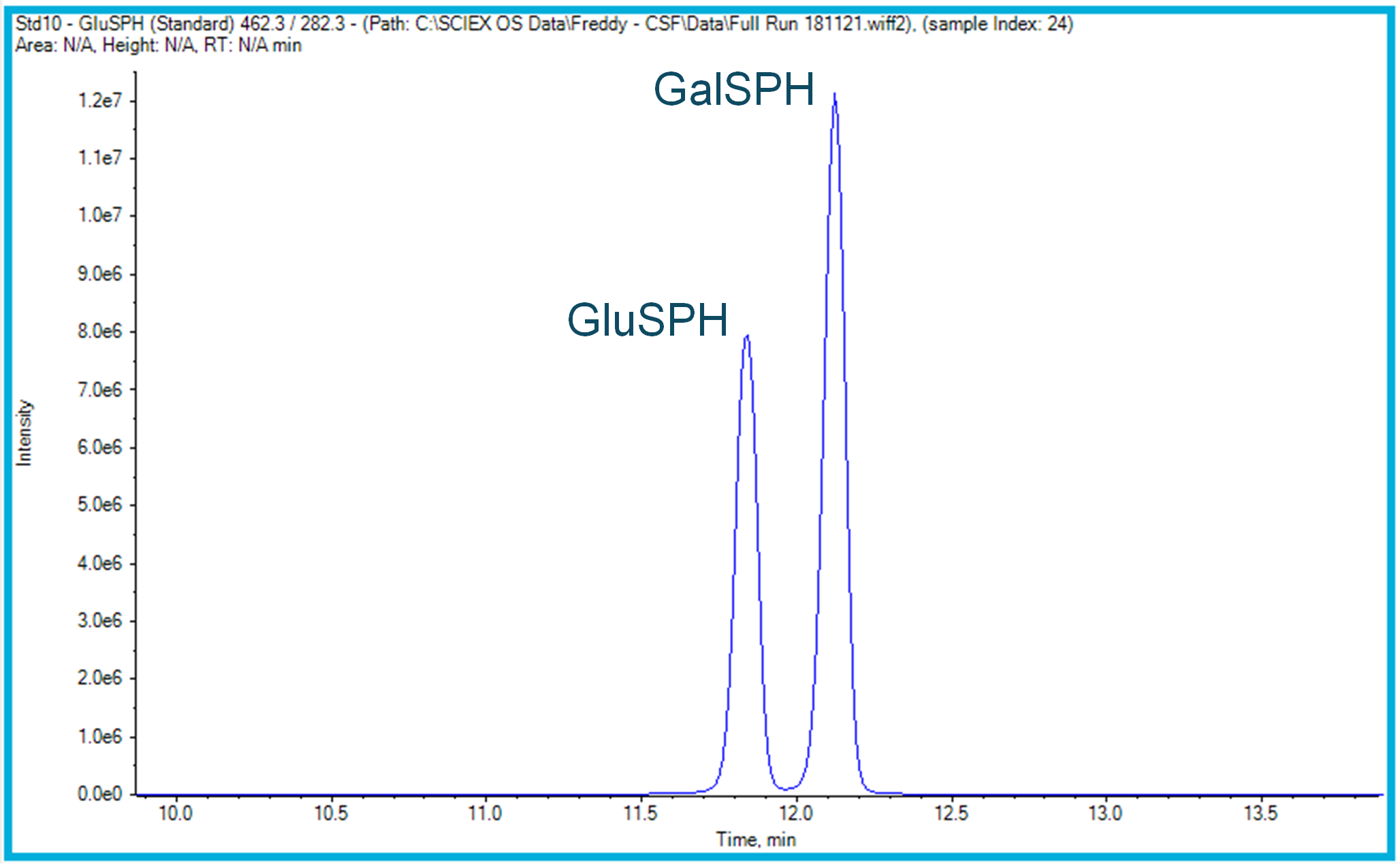 Figure 1. Extracted ion chromatograms (XIC) of GluSPH and GalSPH. Using HILIC chromatography, good separation, and peak shape of the two isomers was achieved. Both compounds are analyzed using the same MRM transition and so chromatographic separation is paramount.

Sample preparation: Standards for galactosyl sphingosine (GalSPH) and glucosyl sphingosine (GluSPH) and their deuterated internal standards, GluSPH-D5 and GalSPH-D5, were obtained from Avanti Polar Lipids. Extracted standards and cerebral spinal fluid (CSF) samples were prepared by Ardena Bioanalysis. Standards were prepared in surrogate CSF across a range of concentrations suitable for analyzing endogenous levels of the CSF samples, with the deuterated internal standards held add a constant concentration. The samples were then split to be analyzed on both the SCIEX Triple Quad 6500+ and SCIEX 7500 systems.

To compare the sensitivities between the two systems, a set of standards and CSF samples were prepared by Ardena Bioanalysis Assen before being divided and analyzed on both MS systems. Figure 2 highlights the calibration curves obtained for GluSPH and GalSPH on the SCIEX 7500 system across a concentration range between 0.001 – 1.000 pmol/mL. Both provided an r value >0.99, with accuracies between 80 – 120% at each level (Table 1), providing good linearity across the 3 orders of dynamic range studied. A similar concentration curve was generated on the QTRAP 6500+ system (data not shown).

The %RSD and calculated concentrations for the bottom four surrogate CSF standards are also detailed in Table 2 highlighting that the %RSD values are below acceptable criteria of 10%. 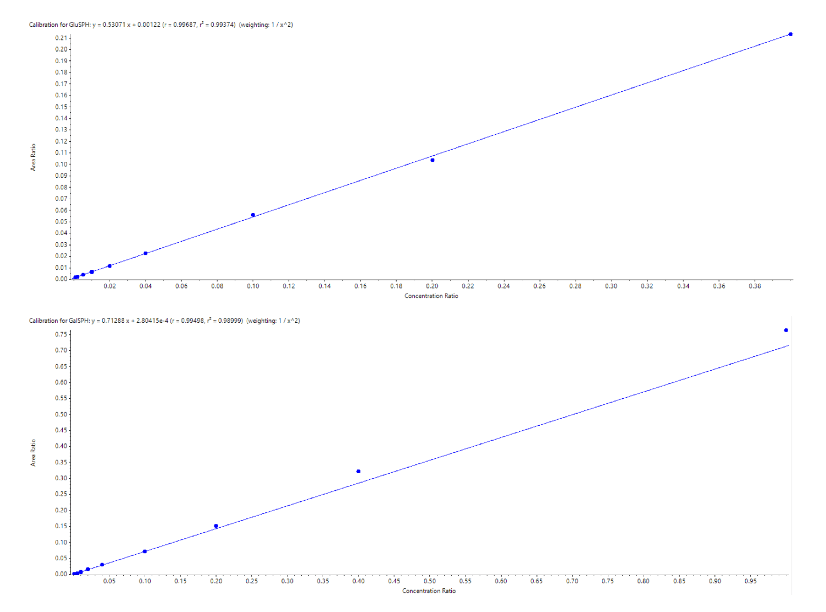 Figure 2, Calibration curves using the SCIEX 7500 system. Calibration curves for both GluSPH (top) and GalSPH (bottom) were generated in surrogate CSF. Both have an r value > 0.99 and use a 1/X2 weighting, with a range between 0.001 – 1.000 pmol/mL. Results were obtained using internal standard correction with the deuterated forms of the analytes (GluSPH-D5 and GalSPH-D5).

Table 1. The % accuracy values for GalSPH and GluSPH on the SCIEX 7500 system. The accuracy values calculated from the calibration curve generated in surrogate CSF were within 80-120% for all concentrations analyzed. 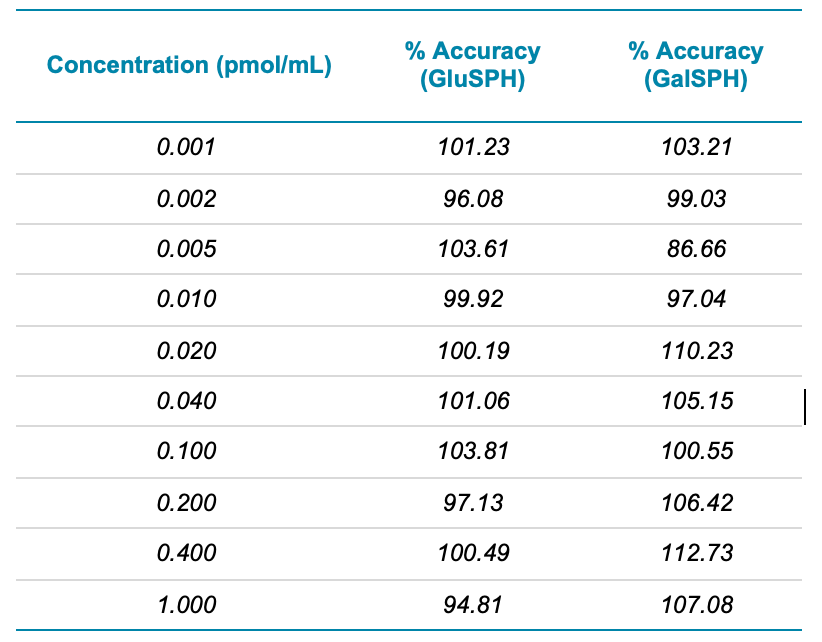