Glycans and glycosylated biomolecules are highly variable in structure due to differences in their anomeric configurations, monomer stereochemistry and inter-residue linkage positions. In this study, SelexION® Technology was used to analyze biologically relevant glycan and glycopeptide isomers, to determine whether differential mobility separation would be useful in the study of glycan and glycopeptide structural isomers. Gas-phase chemical modifiers were key to enhancing separations. Glycans and glycosylated biomolecules perform numerous roles through their interactions in cellular environments, with more than half of human proteins being glycosylated.1 The characterization of glycosylation in biopharmaceuticals is essential for the determination of function and efficacy.2 Thus, glycan analysis is gaining great interest. However, carbohydrates are highly variable in structure owing to differences in their anomeric configurations, monomer stereochemistry and inter-residue linkage positions. The separation of carbohydrates has been a great challenge for current analytical techniques.3-4 Differential mobility spectrometry (DMS) is a technology that can separate gas-phase ions prior to analysis by mass spectrometry (MS)5. It has been used in the separation of various isomeric species, including stereoisomers6, structural isomers7, and tautomers8. In this study, DMS-MS was employed for the structural analysis of glycans and glycopeptides.

The separation of the isomeric glycan and glycopeptide species studied here was accomplished because of differences in the DMS behavior between each isomer.9 The ions bear subtle structural differences that allow the DMS to separate them based on their different mobilities during the high- and low-field portions of the asymmetric waveform applied across the DMS cell (Separation Voltage, SV). As such, each isomer requires a different DC compensation voltage (CV) to bring their trajectories on-axis for successful sampling by the MS. Besides the differences between the isomers' structures, differences in how these species bind to added volatile chemical modifiers in the DMS cell makes their DMS behavior differences more prominent, yielding increased selectivity and peak capacity for the DMS experiments. 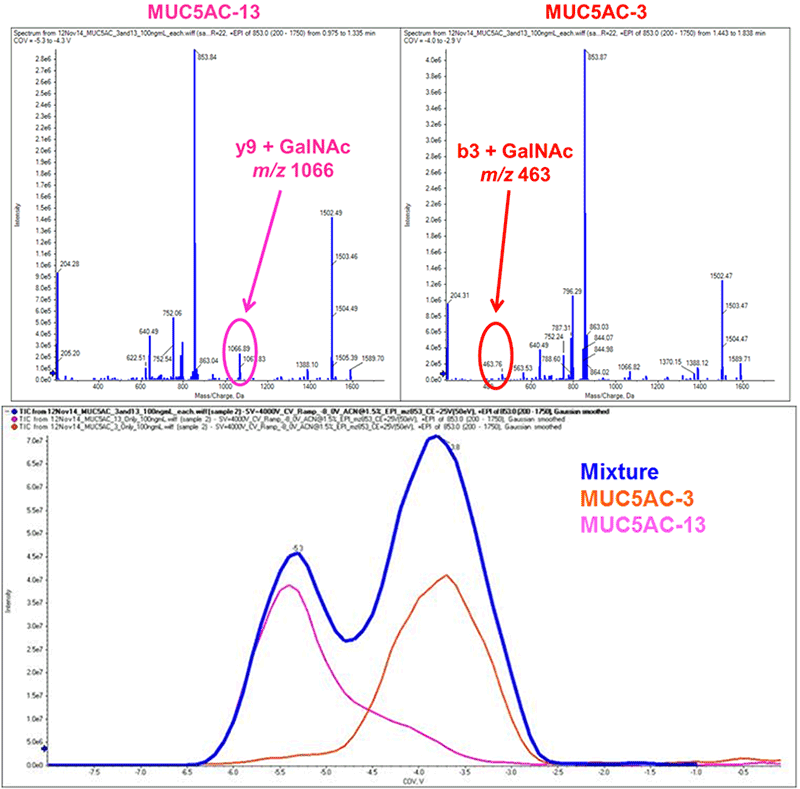 Figure 1. MS/MS and DMS analysis of a pair of Glycopeptide Isomers (MUC5AC-3, GTTPSPVPTTSTTSAP, and MUC5AC-13, GTTPSPVPTTSTTSAP). These two glycopeptides differ only in the location of the O-linked GalNAc modification; the red T in the peptide sequence represents the modified threonine residue. (Top) Monitoring diagnostic y or b-ions for the different sites of glycosylation allowed DMS separation of the [M+2H]2+ ions of these glycopeptides to be monitored. With acetonitrile as the chemical modifier, the DMS afforded clear separation between the two peptide forms (bottom).

DMS-MS conditions: The SelexION Device was mounted in the atmospheric region between the sampling orifice and a Turbo V™ Source on either the SCIEX QTRAP® 5500 or 6500+ System (Figure 2). The temperature of the DMS cell was maintained at 150 ºC, and the nitrogen curtain gas was operated at 30 psi. Chemical modifiers (water, methanol or acetonitrile) were added into the nitrogen curtain gas flow at 1.5% (mole ratio). The fundamentals of the DMS device have been described elsewhere5. In this study, both separation voltage (SV) and compensation voltage (CV) were scanned using Analyst® Software 1.6. As the SV was stepped from 0 to 4000 V, CV was scanned from -40 V to +20 V. These data were plotted as dispersion plots, with SV as the x-axis, and the optimal CV for ion transmission as the y-axis. 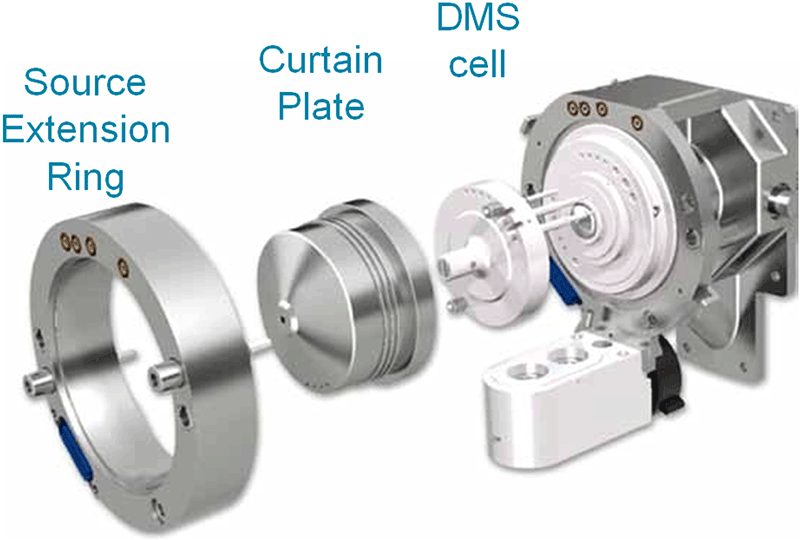 Figure 2. The SelexION Differential Mobility Spectrometry Device. The DMS interface is directly coupled to the orifice plate. A modified curtain plate accommodates the DMS cell, which can be easily installed and removed without the use of any tools and without venting the system. The source extension ring enables use of the standard SCIEX QTRAP system sources.

SelexION Technology was employed to analyze the sodiated or deprotonated molecular ions of disaccharides and trisaccharides. Maltose and melibiose have the same mass, however differ structurally based on the sugar linkage. To assess the ability of DMS to separate these very similar sugars, the compensation voltage (CV) was ramped across a range of separation voltages (SV) and the CV optimum was determined at each step. These CV curves were then plotted for each sugar to visualize separation potential (Figure 3). 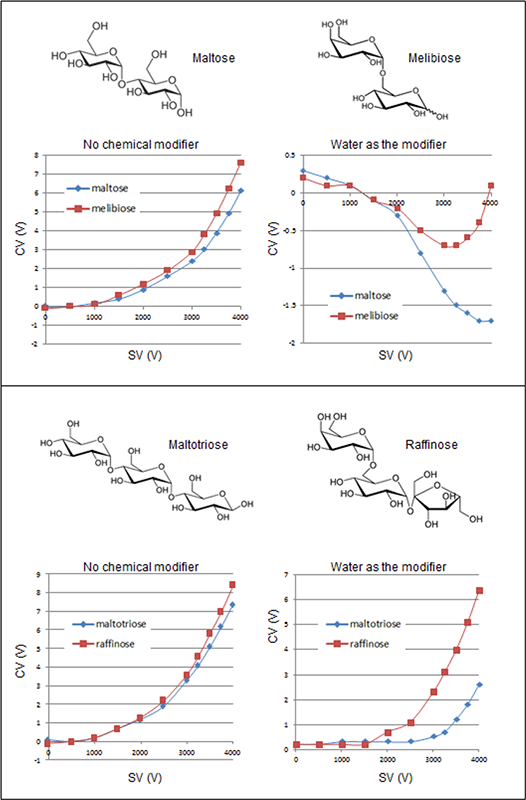 Figure 3.  Separation of isomeric glycans with DMS-MS. (Top) Two  sodiated disaccharides were analyzed using DMS and were found to fully separate with the addition of water as a chemical modifier; note the clear separation of the red and blue trend lines above 3000 V SV. Similar observation was found for the two sodiated trisaccharides (bottom).

When these carbohydrates were analyzed without chemical modifiers, molecular ions could not be fully separated (Figure 3, left). The controlled addition of water or methanol vapor in the DMS cell induced different shifts in optimal CVs at the higher separation voltages, enhancing the separation of isomeric carbohydrates. The ability to add different chemical modifiers is a unique feature of the planar differential mobility cell and provides an additional orthogonal level of separation that can be explored for different molecule types.

In addition to maltotriose and raffinose, two additional isomeric trisaccharides were studied (Figure 4). As well as using water as the chemical modifier, the separation was explored using methanol. In this case, good separation was obtained for 3 out of 4 sugars (Figure 4). The final set of sugars tested were deprotonated Lewis x and Lewis a trisaccharides. In this case, methanol provided the best separation by DMS (Figure 5). 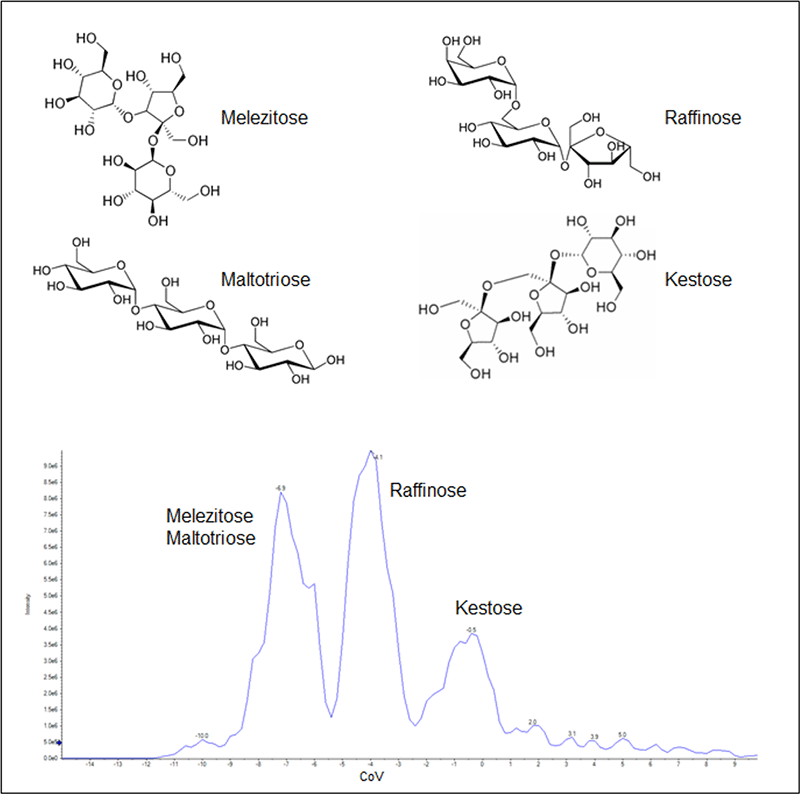 Figure 4. DMS separation of four sodiated trisaccharide isomers. Using methanol as a chemical modifier enabled the separation of 3 out of 4 sugar isomers, as seen in the ionogram (bottom). Separation voltage was set to 4000 V. 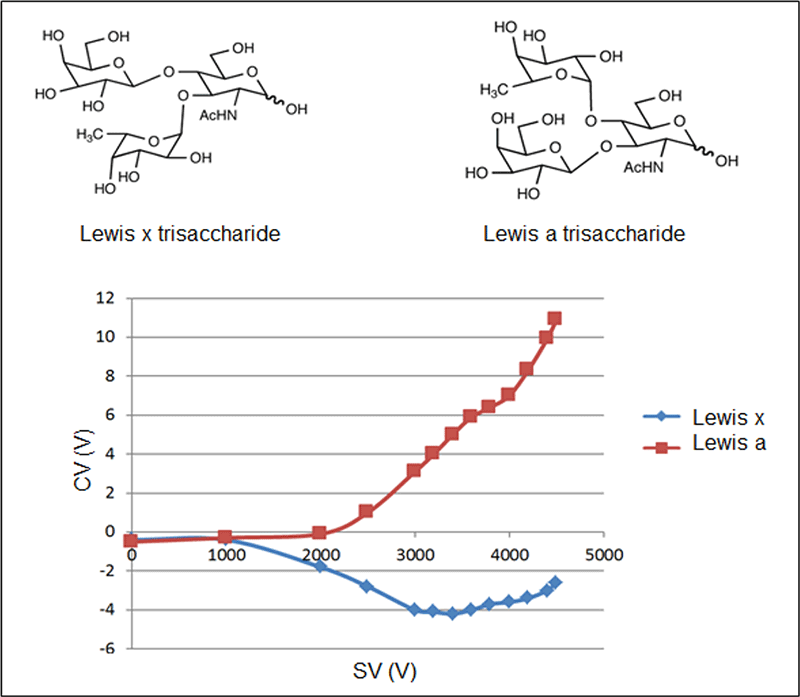 Figure 5. DMS separation of deprotonated Lewis a and Lewis x trisaccharide isomers. For these sugars, using methanol as a chemical modifier provided clear separation at separation voltages above 3000V.

Another structural feature of glycans that makes them challenging to study is the attachment of sialic acid residues to the ends of the glycan chains. Understanding this linkage is important as it impacts biological function.

Here, two pairs of glycans with α2-3- and α2-6-linked sialic acid were studied to determine whether DMS could resolve this type of structural difference. As shown in Figure 6 and 7, in the presence of methanol as a chemical modifier, baseline separation of these isomers could be achieved. 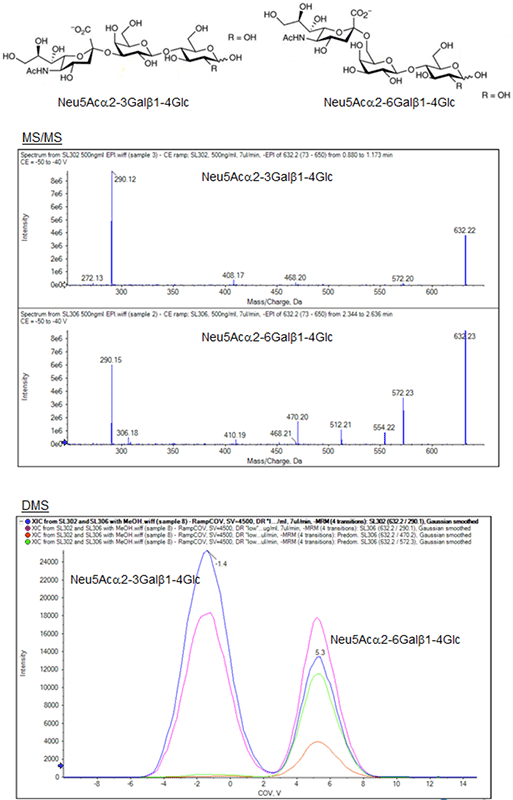 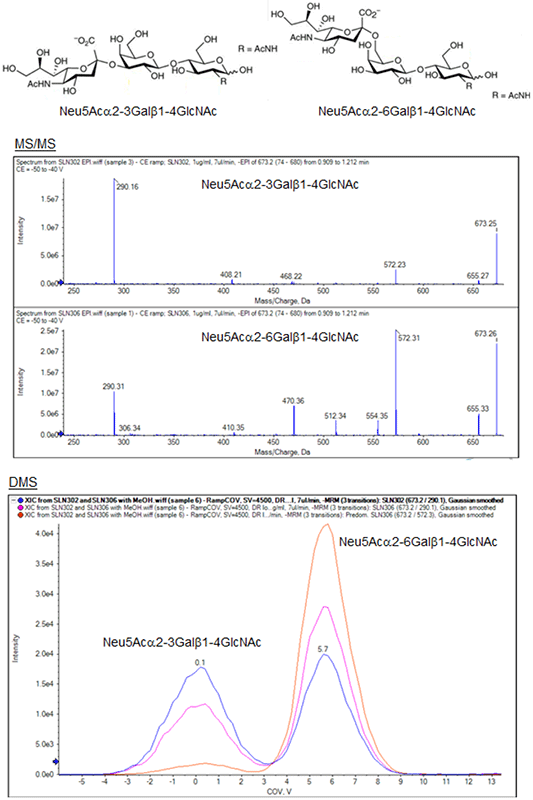 Figure 7. Separation of deprotonated glycan isomers with differing sialic acid linkages. (Top) Structure and MS/MS of a pair of deprotonated isomers (Neu5Acα2-3Galβ1-4GlcNAc and Neu5Acα2-6Galβ1- 4GlcNAC). (Bottom) Using methanol as the chemical modifier and a separation voltage of 4500V, baseline separation of the two isomers, differing only by their sialic acid linkage, was achieved.

In this study, SelexION Technology was used to analyze biologically relevant glycan and glycopeptide isomers, to determine whether differential mobility separation would be useful in the study of glycan and glycopeptide structural isomers. With the addition of gas-phase chemical modifiers to the DMS, various isomeric species were successfully separated including:

Coupled with QTRAP System technology, high sensitivity MS/MS data with CID fragmentation can also be collected, to identify diagnostic fragments for monitoring separation (such as the GalNAc modification fragments for the O-linked glycopeptide, Figure 1) or to confirm identity of glycans after separation. SelexION Technology coupled to QTRAP systems provides a fast and convenient approach for isomeric glycan and glycopeptide analyses.