Targeted quantitation using triple quadrupole based MS systems have been the technique of choice due to the sensitivity and selectivity for compound detection in complex samples. The Speed and sensitivity of the TripleTOF Systems have enabled a high resolution targeted quantitative workflow, the MRMHR workflow (or PRM). High resolution TOF MS/MS spectra are acquired and then fragment ions are extracted post-acquisition at high resolution to generate MRM-like data. The MRMHR Workflow can provide better specificity and higher quantitative robustness by reducing interferences. Using yeast as a model system, the quantitative attributes of this technique for proteomics was explored. 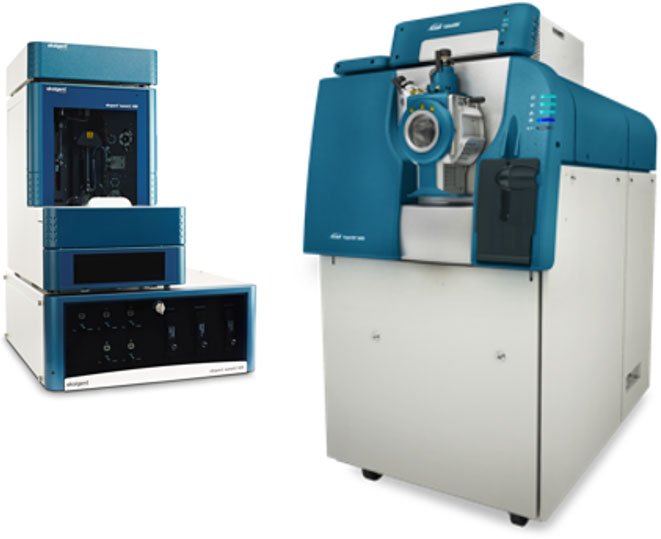 Multiple Reaction Monitoring (MRM) on triple quadrupole based instrumentation is the standard mass spectrometric technique of choice for targeted MS quantification in all application areas, due to its ability to provide the highest specificity and sensitivity for the detection of specific components in complex mixtures. However, the speed and sensitivity of today’s accurate mass MS systems have enabled a new quantification strategy with similar performance characteristics. In this strategy (termed MRMHR workflow or parallel reaction monitoring, PRM), looped MS/MS spectra are collected at high-resolution with short accumulation times, and then fragment ions are extracted post-acquisition to generate MRM-like peaks for integration and quantification. With instrumentation like the TripleTOF® Systems, this targeted technique is sensitive and fast enough to enable quantitative performance similar to higher end triple quadrupole instruments, with full fragmentation data measured at high resolution and high mass accuracy.

Previous work has shown that MRM analysis has the power to detect a broad dynamic range of proteins down to less than 50 protein copies/cell in a complex, unfractionated sample of a yeast cell lysate digest1. Here, we used the same model lysate to explore the effect of the high resolution capabilities of the TripleTOF 5600 System in MRMHR mode (Figure 1) on a set of proteins representing the lower end of cellular abundances (<50-10,000 copies/cell). We explored the impact of various data processing strategies on quantitative quality.

Figure 1. Looped high resolution MS/MS – MRMHR Workflow.  (Left) In this analysis, the instrument is set up such that Q1 is fixed on a target peptide m/z, the peptide is fragmented in the collision cell and the full scan TOF MS/MS is acquired. (Right) This is repeated across the LC run. After data acquisition, extracted ion chromatograms on sequence specific ions are generated. Multiple fragment ions can be monitored or even summed together because the full scan MS/MS is always acquired. After this extraction, the processing for quantification is now very similar to how one would handle MRM data acquired on a triple quad or QTRAP® System. Multiple target peptides can be monitored per LC run by looped together multiple different MS/MS experiments, and these can even to scheduled in time to allow larger number of peptides to be analyzed.

Sample preparation: The yeast cell lysate was denatured using RapiGest, then reduced with tris-(2-carboxyethyl)phosphine and alkylated with iodoacetamide. An overnight digestion with trypsin was performed (37 °C).

Chromatography: The sample was analyzed using a nanoflow LC system configured in trap elute mode (SCIEX). The cell lysate (2 µg total protein) was loaded at 2 μL/min onto a 200 µm x 0.5 mm precolumn and eluted at 300 nL/min onto an analytical 75 µm x 150 mm column. Both pre-column and analytical column were filled with ChromXP C18-CL 3μm 120 Å phase (SCIEX). An elution gradient of 5-35% acetonitrile (0.1% formic acid) with a 60 min gradient was used. A µL pick-up method was used for the autosampler method.

Mass spectrometry: Multiplexed looped MS/MS acquisition methods (MRMHR methods) targeting proteins spanning a range of abundances from 10,000-<50 copies/cell were developed using Skyline software. Data was acquired on the TripleTOF® 5600 System, where Q1 resolution was set to Unit and CE was computed for each precursor. High sensitivity MS/MS mode was used, to obtain MS/MS spectra with resolution >15,000 (FWHM). Accumulation times were varied and replicates were run of each experimental condition. 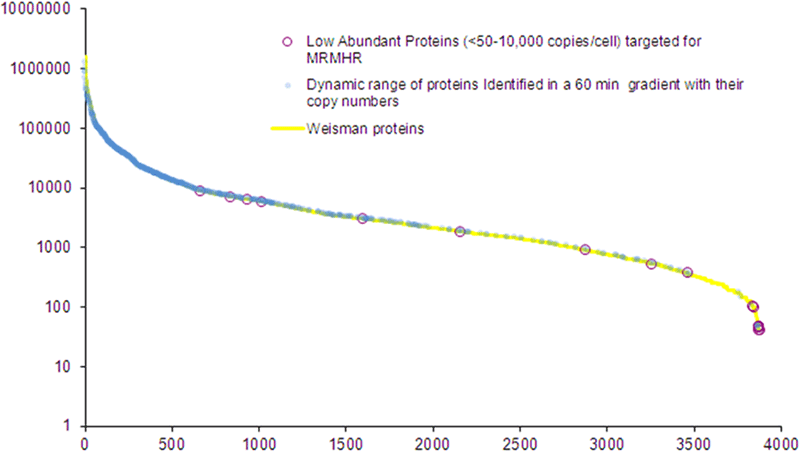 Because the full scan data is acquired all the time, data processing decisions such as which fragment ions to extract, what extraction resolution to use (Figure 3) and whether or not summing fragment ions can improve data quality are deferred until after the acquisition is complete. This simplifies assay development, as the only parameters that need to be determined upfront are the precursors’ m/z values and collision energy. Shown in Figure 4 (top) is an example for peptide VLDQLLLPYTTK from protein MRI1, where the summation of three fragment ions improved ion statistics and data quality. 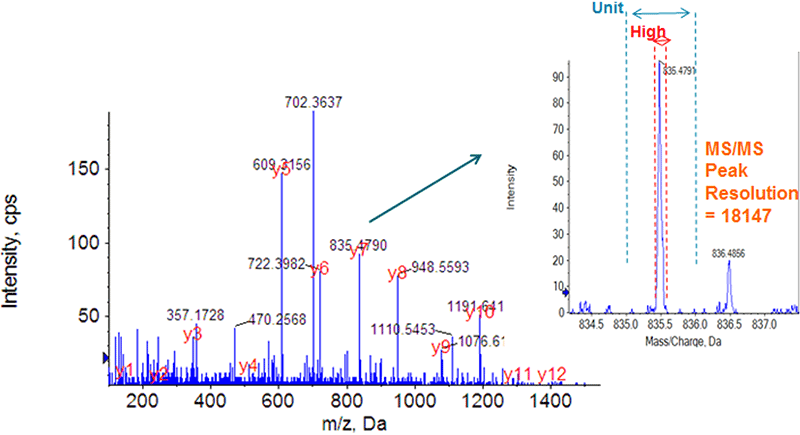 Figure 3. High resolution MS/MS of peptide MRI1.VLDQLLLPYTTK. Looped full scan MS/MS is acquired across the LC peak at high resolution, >15,000 or >30,000, as shown in the inset for the y7 fragment ion. High resolution XICs are generated post-acquisition and are typically done using a narrow extraction window (red lines) to leverage the high resolution data. In contrast, when performing MRM analysis with the quadrupoles set at unit resolution, the effective width is ~1 Da as shown by the blue lines. 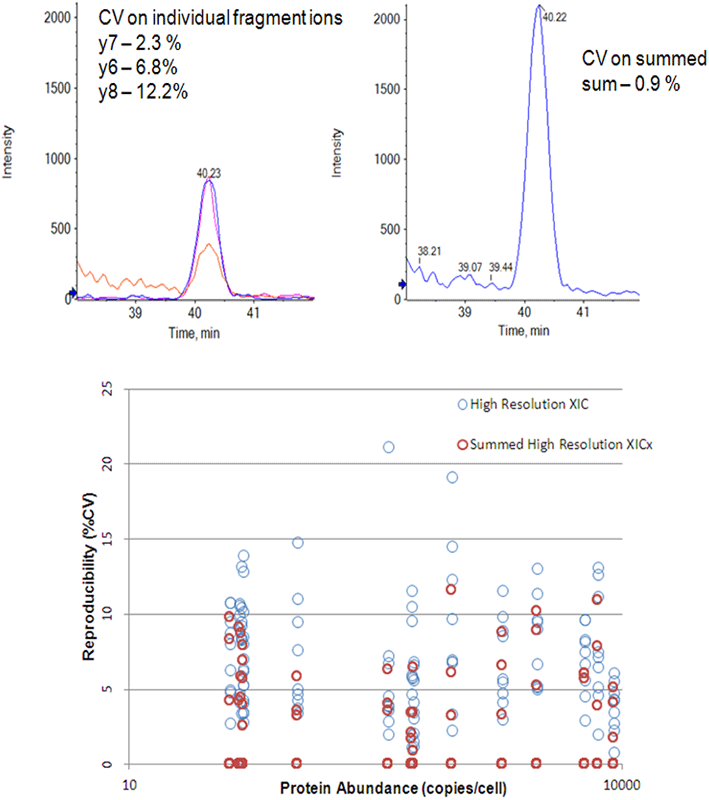 Multiple peptides per method can be analyzed by looping together multiple MS/MS scans in the experiment, and then extracting the relevant sets of fragment ions in the data processing, as illustrated in Figure 5. In this experiment 43 different peptides from 15 proteins were targeted from the yeast proteome. These MS/MS can also be scheduled in time to further increase the numbers of peptides that can be targeted in a single run. 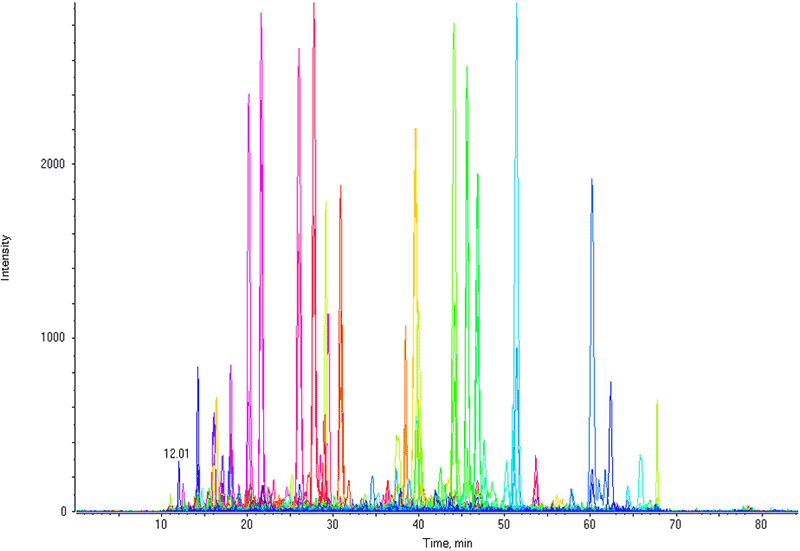 When targeted quantification is done on a triple quadrupole based instrument, quadrupoles are typically set at unit resolution, transmitting a 0.7 Da wide window in both Q1 and Q3. Most of the time, this resolution is sufficient to obtain high quality quantitation on peptides in complex matrices. However sometimes higher specificity is required and in these cases, performing the assays on an accurate mass system such as a QqTOF system can improve data quality. The difference with the MRMHR workflow is that the TOF analyzer is used in place of ‘Q3’ for fragment ion detection with its inherent advantages of detecting all ions, at high resolution and high mass accuracy (Figure 1).

To illustrate, multiple fragment ions were extracted at variable extraction widths for some of the lower abundant target peptides in the yeast lysate (Figure 6). The width of the extraction window used is determined by the specificity required to get a clean quantitative peak on each peptide. In the example shown, an interfering fragment ion very close in m/z from the target y5 fragment ion can be resolved using much narrower extraction widths. The benefit of full scan MS/MS is that selective post-acquisition extraction of the data makes it easy to establish the optimal fragment ions and XIC widths to employ to generate  the highest quality quantitative data. 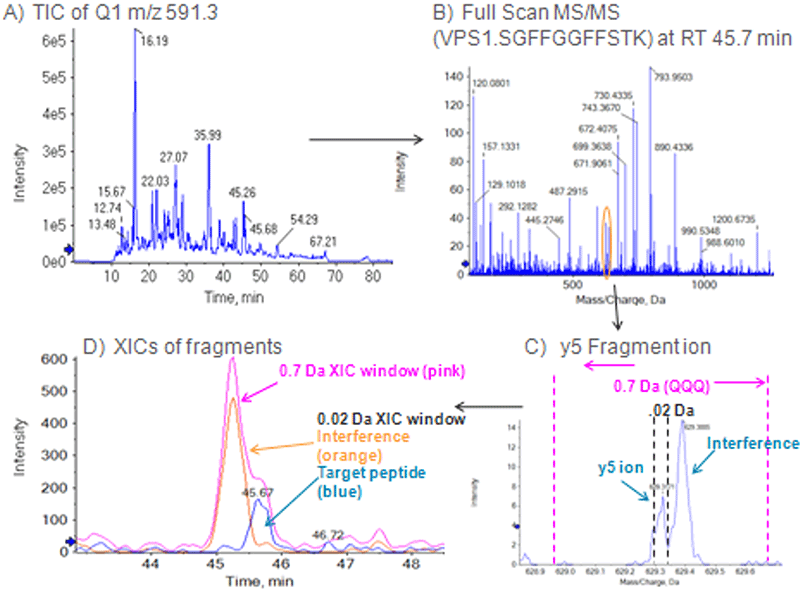