The Scheduled MRM™ Algorithm Pro provides tremendous advantages for the generation and use of MRM assays on SCIEX Triple Quad™ and QTRAP® systems. Time scheduling of MRM transitions allows higher number of transitions to be monitored concurrently while maintaining analytical reproducibility. Methods are easy to create with many powerful features as the algorithm computes the method parameters automatically. Using the advanced features can provide improvements in assay robustness, sensitivity and accuracy, increased assay multiplexing and higher results confidence. 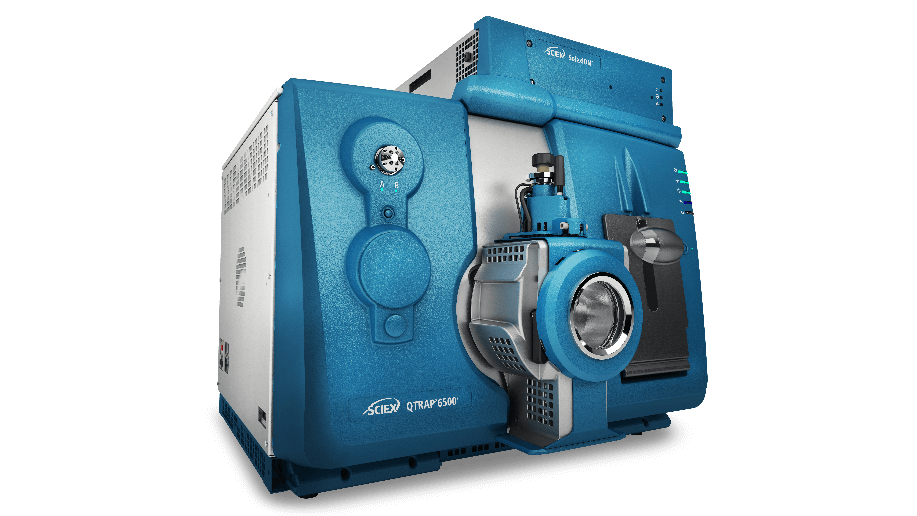 The use of Multiple Reaction Monitoring (MRM) for targeted quantification on triple quadrupole-based mass spectrometry (MS) systems is one of the most widely used MS techniques in use today. Because of its well-known sensitivity and selectivity attributes, MRM is amenable to many different analytes, applications, and markets. However as more extensive analyte panels are increasingly being demanded, higher MRM multiplexing is becoming essential for throughput.

With the Scheduled MRM Pro Algorithm, significantly more MRM transitions can be monitored in a single acquisition while maintaining the quantitative reproducibility that is essential for targeted quantification assays. By monitoring each MRM transition only around its expected elution time (Figure 1), many more analytes can be monitored. This MRM scheduling decreases the number of concurrent MRMs monitored at any point in time, allowing both the cycle time and dwell time to remain optimal at higher levels of MRM multiplexing. Building on the intelligence of the original Scheduled MRM Algorithm, the Scheduled MRM Algorithm Pro further accelerates MRM assay development and increases the robustness of large multiplexed assays. MRM assays consisting of up to 4000 MRM transitions can be run, facilitated by intelligent use of retention time windows during an LC analysis, all while maintaining an optimum number of data points across each peak to ensure the highest precision in quantitative measurements.

Figure 1.  Scheduled MRM Algorithm Pro. Using knowledge of the elution time of each analyte, each MRM transition is monitored only during a short retention time window. This allows many more MRM transitions to be monitored in a single LC run, while still maintaining maximized dwell times and optimized cycle times.

Dwell Time: Dwell time is the time spent acquiring a specific MRM transition during each cycle. Because of the LINAC® Collision Cell in SCIEX TripleQuad™ and QTRAP Systems, very short dwell times can be used (5 ms or less). However, higher dwell times are always desirable for better signal to noise ratio and sensitivity, especially for lower abundant analytes.

Cycle Time: The cycle time is the amount of time it takes for the instrument to run through each of the MRMs in a list before starting over again. Each cycle is one LC data point. Thus, the ideal cycle time for an MRM assay is a chromatographic consideration. A cycle time which provides an LC peak sampling rate of at least 6-8 data points across the peak at half height is optimal for LC peak integration. Better peak integration will provide better accuracy, especially for lower abundant analytes.

An advantage to using MRM assays for quantitative analysis is the apparent ease of multiplexing (measuring higher numbers of MRMs per method). However, as shown in Figure 2, the key parameters of MRM analysis must be considered. Data quality can be severely impacted if dwell times are decreased and cycle times are increased beyond a reasonable extent. As illustrated in Figure 1, knowledge of the elution time of each analyte allows the Scheduled MRM Algorithm Pro to create an acquisition method where each MRM transition is monitored only across a short time window. At any one point in time, the number of concurrent MRM transitions is significantly reduced resulting in much higher duty cycles for each analyte. The software computes maximal dwell times for the co-eluting species while maintaining the desired cycle time. A maximized dwell time, an optimal cycle time, and the highest possible duty cycle for each MRM ensure that the analytical precision is maintained at higher multiplexing.

Figure 2. Key considerations for maximizing MRM multiplexing. A) Traditionally MRMs are monitored across the entire LC run with fixed dwell times and cycle times. This produces good sampling of the LC peak (right), where the width of the bars indicates the dwell time and the spaces between the bars indicate the cycle time. B) Tripling the multiplexing by decreasing dwell time maintains good peak sampling, but dwell time and duty cycle are impacted (reduced line widths). C) Tripling the multiplexing by extending cycle time can maintain dwell time but results in very poor peak sampling (large spaces between lines).

One of the main features that makes the Scheduled MRM Algorithm Pro so powerful is the ease with which quantitative MRM acquisition methods can be created. The user is required to specify several key parameters which may be typed in, imported from Excel, or from Skyline Software:

Within seconds, the algorithm automatically builds an acquisition method that schedules the appropriate MRM transitions to be monitored only around their expected elution time. No tedious manual scheduling is required.

Besides these key parameters, several optional advanced settings can also be specified. These include (1) MRM Triggered MRM acquisition, (2) Dwell Time Weighting, (3) acquisition of MRM triggered MS/MS data and use of the Group based triggering, (4) use of a Flexible Window Width, (5) Dynamic Window Extension, and (6) Variable Q1/Q3 Resolution settings. These can be used or left empty (or set to default values) and are discussed below.

For many applications, it is preferable to monitor more than one MRM transition for each compound. This can help to optimize assay robustness and quantitative accuracy. But because this adds to the overall number of MRM transitions to monitor for the assay, this can adversely affect the total number of compounds that can be analyzed. To combat this, an MRM triggered MRM acquisition strategy can be used (Figure 3). With MRM triggered MRM acquisition, one primary transition (or more) is monitored and triggers secondary MRMs for the same compound only when the intensity of the primary transition exceeds the defined threshold. Secondary MRMs are monitored until primaries drop back below the threshold, thus are monitored across the LC peak. The secondary transitions maintain accurate intensity and, with appropriate threshold settings, also maintain accurate and quantifiable areas.

Higher dwell times improve the signal to noise ratio of MRM transitions. However, indiscriminately increasing dwell times will eventually have a negative impact on the cycle time. Using the same dwell time on a high intensity compound (such as an internal standard) as on a low intensity compound (such as a difficult to ionize analyte) could be unnecessary and waste precious cycle time. Dwell time weighting allows the desired dwell time to be expressed as a relative factor. For example, highly abundant components can be assigned a normal weight (1) while difficult compounds can be assigned a high weight (~5). During the run, the available dwell time will be assigned based upon this weighting (Figure 4). This maintains the cycle time and optimizes the signal to noise ratio for low abundant peaks.

In complex samples and matrices, it is not uncommon to find multiple peaks with the same masses that coelute. Multiple MRM transitions or ion ratios can all be confounded by these interferences, but a full scan MS/MS spectrum can identify the compound of interest and help identify any interferences. The MRM triggered full scan MS/MS workflow available only on QTRAP Systems provides extremely fast and sensitive MS/MS acquisition during MRM experiments. It provides evidence for the compound, as well as evidence for any interfering compounds that may be coeluting.

The Group based triggering option takes this feature one step further. Triggering a full scan MS/MS acquisition for any single transition can sometimes lead to the triggering on signal other than the target analytes. This can be increasingly problematic for samples in complex matrices with multiple isobaric peaks and large MRM assay panels. With many spurious MS/MS triggering events, this can unnecessarily reduce the sampling for other transitions. Using a group of MRM transitions for a target compound as a trigger reduces the false triggers.  With the group-based triggering workflow, all grouped transitions must rise above a specified threshold before MS/MS acquisition is triggered. This effectively limits the acquisition to only those times when a confirmation MS/MS spectrum is worth acquiring (Figure 5).

Figure 5. The group based MRM triggered MS/MS workflow. Full scan MS/MS data is only acquired when the intensities of all of the peaks within a group are above a pre-set threshold. This helps to focus the acquisition of enhanced product ion scans to only the analytes of interest while minimizing false positive acquisitions

The combination of the MRM Triggered MRM feature with the Group MIDAS Workflow feature creates a powerful logic especially useful for complex samples and large assay panels. Here, primary MRM transitions are used to trigger secondary MRM transitions and only when all primary AND secondary transitions are above the thresholds will MS/MS acquisition be triggered (Figure 6). Thresholds can be set individually. For very weak transitions the threshold can even be set to zero to ensure MS/MS data will be acquired regardless of the intensities observed for those peaks. Alternatively, thresholds can also be set based upon known ion ratios.

It is not uncommon for chromatographic peak widths to vary at different times in the LC gradient. Additionally, often it is known a priori that some compounds will require a wider retention time (RT) window due to chromatographic behavior or known variation. With Flexible RT Window Widths, each MRM transition can have its own RT window (Figure 7). Wider windows can be assigned to analytes that show higher variance run to run or have broader peak widths. This can be entered as a desired window width for each analyte if different from the global method settings.

Sometimes chromatography is not 100% reproducible and retention times can shift. Any instability in retention time (RT) can have a serious impact on quantitation quality, as entire portions of the peak can be missing. Dynamic Window Extension accommodates for this by automatically increasing the acquisition window for any MRM transition that has intensity above a specified threshold (Figure 8). Windows are automatically extended for transitions where the peak has not completely eluted (when the signal is still above the user defined threshold). The acquisition is extended until the peak drops below the threshold or for up to one additional window. This feature works automatically with no requirement for special retention time standards and allows dramatic improvement in RT robustness, but with minimal impact on overall cycle times.

Figure 9. Variable Q1 and Q3 windows. The resolution settings for Q1 and Q3 can be individually set for each MRM transition if desired. This allows more flexible balancing of specificity and sensitivity for each analyte transition.

Using the Scheduled MRM Algorithm to build MRM acquisition methods provides tremendous advantages for the generation and use of MRM assays and is available on all SCIEX Triple Quad and QTRAP Systems. It allows a higher number of transitions to be monitored concurrently without having to resort to shorter dwell times or longer cycle times. This ensures that the analytical reproducibility of the MRM assay is maintained at even 4000 MRM transitions during a single LC run. The powerful Scheduled MRM Algorithm Pro makes it extremely easy to create highly multiplexed MRM assays, without the complicated and tedious manual interaction required for creation of time period methods. The input of just a few key parameters allows the algorithm to automatically and intelligently create the optimum assay in seconds.

Additionally, the advanced features of the Scheduled MRM Pro Algorithm further maximize the overall quality of the final assay with powerful and intelligent settings to improve low level, variable transitions and increase multiplexing and confidence (Table 1).