An accurate and robust LC-MRM method using a smaller volume direct injection approach has been developed on the QTRAP 6500+ system, with sensitivity demonstrated to easily meet the current recommended limits set by the European authorities for drinking water (February 2020). Several PFAS specific analytical challenges have been addressed with this method, ensuring the method is easily implemented into labs. Data was also generated  on the SCIEX 7500 system to highlight the advantages of increased sensitivity. 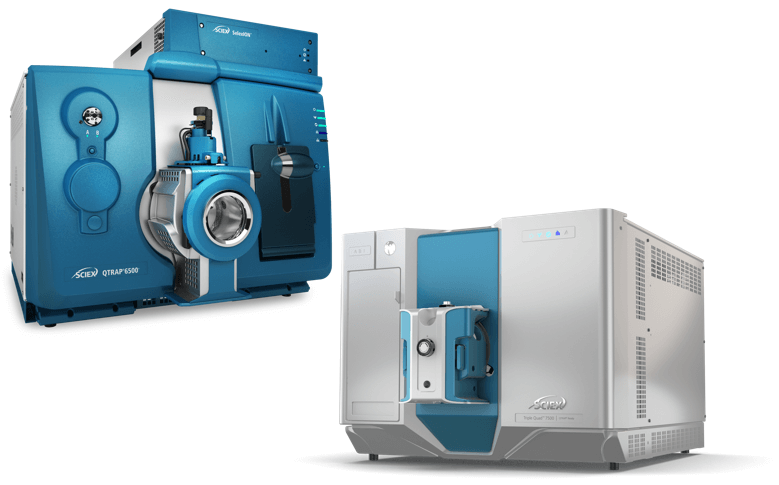 Per- and polyfluoroalkyl substances (PFAS) are a family of thousands of synthetic compounds that are frequently found in the environment due to their widespread use in multiple industries. These compounds, which contain carbon-fluorine bonds, are incredibly resistant to breaking down. This means that they can accumulate within flora and fauna, and contaminate food and drinking water, leading to serious complications over time. Even if all manufacturing involving PFAS suddenly stopped, the existing environmental contamination would persist for decades to come. For this reason, it is paramount to limit the release of PFAS compounds into the environment. While some manufacturers have begun replacing PFAS compounds with either shorter-chain PFAS or non-fluorinated compounds, shorter-chain PFAS molecules have the potential for similar accumulation in the environment, food and drinking water.1

In February 2020, the European Parliament and Council of the European Union released a new directive that recasts the limit of PFAS in drinking water to 0.5 µg/L for all PFAS compounds identified, and 0.1 µg/L for a subset of PFAS compounds that are deemed particularly concerning for humans (see Table 1 for the LOQ of each compound analyzed). EU member states can choose which limit to use, and they can also decide to implement both. The difference between the limits is dependent on a list of compounds stated within the directive. The 0.1 µg/L limit applies to the compounds included in this list, which contain a perfluoroalkyl moiety with 3 or more carbons (i.e., –CnF2n–, n ≥ 3) or a perfluoroalkylether moiety with 2 or more carbons (i.e., –CnF2nOCmF2m−, n and m ≥ 1). The 0.5 µg/L limit applies to all PFAS compounds in totality.2

The requirements of this directive create the analytical challenge of achieving these newly set LOQs in drinking water without solid phase extraction (SPE) cleanup. This technical note demonstrates how these limits are easily achievable with a method that uses the QTRAP® 6500+ LC-MS/MS System for the analysis of all required PFAS compounds. In addition, it provides tips to help researchers achieve these limits and reduce common issues associated with the analysis without the use of specialized equipment or system modifications.

The conditions used with the QTRAP 6500+ System were also tested on the SCIEX Triple Quad™ 7500 LC-MS/MS System – QTRAP® Ready to highlight the increased levels of sensitivity that can be achieved with this system.

See Figure 1 for example XICs from a PFAS compound at it’s LLOQ in 3 different water matrices.

Key features of the QTRAP 6500+ System for PFAS analysis

Sample preparation: Calibration solutions were prepared by dilution of each water sample (ultrapure HPLC-grade water, tap water and bottled mineral water) with methanol at a 50:50 ratio.

Note: it is paramount for all solutions to be prepared and vialed in polypropylene vessels. This is necessary due to the potential adsorption of PFAS compounds to glass vessels, which decreases the sensitivity of analytes over time.5

Mass spectrometry: These experiments were performed using the QTRAP 6500+ System and the SCIEX 7500 System. The systems were operated in negative mode with electrospray ionization (ESI) using the Scheduled MRM™ Algorithm. Data was acquired using Analyst® Software. Details for the MS conditions are outlined in the supplementary information.3

Table 1. Quantification of PFAS in various water matrices. LLOQ values for all PFAS compounds analyzed in ultrapure HPLC-grade water, tap water and bottled mineral water using the QTRAP 6500+ System. All LLOQ values provide an S/N (peak-to-peak) value above 10. A total of all PFAS compounds has been calculated for both the 0.1 µg/L and the 0.5 µg/L limits (bottom). All the compounds are relevant to the 0.5 µg/L limit. See Table 3 for a list detailed the full name of all compounds analyzed.

Due to the lowered limits associated with PFAS analysis, it has become increasingly important to provide higher levels of sensitivity to the environmental industry to ensure that the relevant LLOQs can be achieved with accuracy, precision and robustness. Good chromatography is key to providing good separation and removing any instrument contamination from the analysis (Figure 2). To characterize the sensitivity of the QTRAP 6500+ System, concentration curves were generated in HPLC grade water. Example chromatograms for PFNA across the 10-point PFNA calibration curve highlights the quality of the data (Figure 3).

Figure 2. Good separation of all PFAS compounds. Overlaid XICs of all PFAS compounds analyzed (top) and the corresponding internal standards (bottom) at a concentration of 0.02 µg/L. Both zoomed-in panes show that even though some of the compounds could not be fully resolved chromatographically, the use of specific MRM transitions for each compound means that these compounds can be resolved using the mass spectrometer.

Figure 4 highlights some example calibration curves for 3 relevant PFAS compounds, including both % accuracy and %CV (%RSD) data for the calculated concentration at each linearity level. In addition to high accuracy and precision levels, sensitivity is important to ensure that specialized equipment or large injection volumes are unnecessary. The LLOQs for each PFAS monitored in the 3 different water samples are in Table 1, and example chromatograms are shown in Figure 5.

A significant issue with PFAS analysis is that long-chain PFAS compounds have low solubility in water samples and tend to stick to the surface of sample containers. This effect increases with chain length, and this is the main reason that polypropylene material is recommended for storage of samples and standards, and that methanol is added during sample preparation. To evaluate this effect, samples were stored in glass vials and the peak areas for all PFAS compounds were analyzed across 34 hours. The example for PFTeDA is shown in Figure 6, and the results across all PFAS are summarized in Table 2. Of the 21 compounds analyzed, 8 were susceptible to this issue in ultrapure HPLC-grade water and 11 were seen to decrease in both tap water and mineral water matrices. To account for this decrease over long analysis times, it is important to either use polypropylene vials during storage and analysis (Figure 7) or utilize deuterated internal standards to mitigate any change in signal intensity.

Figure 6. Stability assessment of PFTeDA in glass vials over time. XICs showing the sensitivity decrease of PFTeDA over a 34-hour period when using glass vials, which highlights the issue observed for many of the analyzed PFAS compounds. This demonstrates the importance of understanding this aspect of the analysis and accounting for it accordingly.

Table 2. Effect of glass vials on PFAS stability. The compounds here were found to be susceptible to a sensitivity decrease over 34 hours when using glass vials. The decrease is more pronounced for longer-chain PFAS compounds and is unaffected by the water analyzed. This demonstrates the importance of using polypropylene vials to ameliorate this effect.

With past methods that used LC-MS/MS to quantify PFAS compounds in water, it was common to use large injection volumes—possibly even injecting multiple milliliters of sample and performing a trap-and-elute workflow to concentrate this volume and reduce peak broadening. However, this analysis leveraged the high sensitivity of the QTRAP 6500+ System, which enabled the use of a 50 µL injection volume.

Therefore, there is no need for any specialized equipment, such as a CTC autosampler, or for any significant modification to the UHPLC system, other than using a 50–100 µL sample loop. Another benefit of using a reduced injection volume is a reduction in the previously observed issues, such as a high background and contamination, which leads to a more robust and easier-to-implement workflow.

Due to the widespread use of PFAS compounds, it is difficult to achieve a clean blank injection because of the prevalence of contamination that usually originates from the analytical instrumentation itself. This issue is mitigated by the use of a delay column, which means that a clean blank was achieved for all 23 analyzed compounds. This is still an issue to consider when performing PFAS analysis, however.

The new EU drinking water directive (released in February 2020) included 2 new PFAS compounds of concern: L-PFUdS and L-PFTrDS. At the time of the directive’s release, the sourcing of these compounds proved to be particularly challenging, and for this reason, they were not included in the bulk of the analysis performed here. However, in late 2020, it became clear that these compounds were now commercially available (Wellington Laboratories, Guelph, Ontario),4 and so testing was performed to assess their LLOQ (Table 1).

Due to sensitivity being a significant challenge when performing PFAS analysis, testing was also performed on the SCIEX 7500 System, which is the most sensitive triple quadrupole MS system in the SCIEX portfolio. All 20 compounds within the 0.1 µg/L regulation were analyzed, with 15 out of 20 analytes providing improved LLOQ values, 3 providing a comparable LLOQ and 2 having a higher LLOQ due to unexpected interferences, which were thought to be caused by contamination within the water used or related to chromatography (data not shown). Figure 8 and Figure 9 show example results from the calibration curve measured for L-PFOS on the SCIEX 7500 System.

To summarize, an LC-MRM method using a smaller volume direct injection approach has been demonstrated to be sensitive enough to easily meet the current recommended limits set by the European authorities for drinking water. The generated results highlight the accuracy, robustness and precision of the method. Several analytical challenges have been well documented for PFAS analysis in the past, such as blank contamination, compound stability and the need to inject large volumes of samples. This method has successfully addressed these problems, ensuring that it can be much more easily implemented compared with previous methods. It also does not require the use of specialized equipment or extensive modifications to the LC system. In addition, data has been generated using this method on the SCIEX 7500 System to highlight the advantages of increased sensitivity.