The complexity of the lipidome is very high with a huge diversity in lipid molecular species making comprehensive quantitative profiling challenging. In this work, a targeted lipid profiling method has been developed for the quantitation of a large panel of lipid molecular species (~1900 molecular species). An optimized chromatography method was coupled with an Multiple Reaction Monitoring (MRM) assay which enabled a relatively rapid and specific lipid screening technique. The current MRM panel covers most major lipid classes and categories, and fatty acids with 12-26 carbons and 0-6 double bonds including odd chain lipids. This strategy includes an easy to use assay optimization tool (sMRM Pro Builder template) which allows for retention time scheduling of the MRM acquisition and the application of the method to many different biological matrices.

Direct infusion ‘shotgun’ lipidomics is an established approach for broad-based lipidomic analysis1. It is fast and simple, but it can suffer from inherent ion suppression effects, and due to the complexity of the lipidome and the extensive isobaric overlap, there is potential for ambiguous identification2. Reverse and normal phase LC strategies coupled with MS are also frequently used for lipidomics analyses. These strategies separate lipids based on their physico-chemical properties, but the huge diversity of lipid molecular species makes development of standardized “all-inclusive” methods challenging, especially when quantitation is desired3. Furthermore, discovery-based approaches such as information dependent acquisition (IDA) suffer from poor reproducibility, making quantitation unreliable4.

An efficient way to maximize sensitivity and specificity is through targeted lipidomics using HPLC and Multiple Reaction Monitoring (MRM) with a triple quadrupole-based mass spectrometer. A LC separation that can separate lipids into classes and subclasses is key to such an assay5.

Here, a targeted method is described using qualified MRM transitions and commercially available lipid internal standard mixtures, which provides quantitative measurement of ~1900 different lipid molecular species (Figure 1). The target list is can be shortened for a class-specific study or expandable to include new lipid classes. 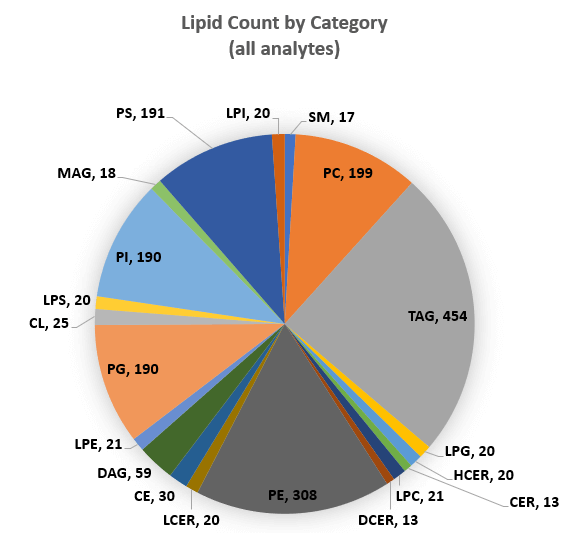 Figure 1. Overview of the LC-based targeted MRM assay. The targeted lipidomics analysis via LC-MS/MS provides for rapid identification and quantification of a broad spectrum of lipid molecular species in a variety of matrices.

LC-MS analysis: The LC separation was performed using a ExionLC™ System consisting of a binary high pressure mixing gradient pump with degasser, a thermostated autosampler, and a column oven. Data can be acquired using either the QTRAP® 6500+ System, equipped with an IonDrive™ Turbo V Ion Source, was operated in low mass mode with Analyst® Software or the SCIEX Triple Quad 7500 System equipped with an OptiFlow® Pro Ion Source and operated using SCIEX OS Software. Retention times are first roughly determined using either the NIST plasma sample spiked with internal standards or a representative matrix sample and the unscheduled MRM method. Analysis of this preliminary data enables the development of a time-scheduled MRM method leveraging the enhanced features in the Scheduled MRM™ Algorithm. Details on the chromatographic and MS methods can be obtained from the Comprehensive Targeted Method for Global Lipidomics Screening7.

Here a large panel of MRM transitions have been developed to provide a targeted assay for a broad range of lipid species. The targeted list is composed of ~1900 lipid molecular species, including PC/LPC, PE/LPE, PS/LPS, PI/LPI, PG/LPG, MAG, DAG, TAG, CL, CE, CER, DCER, HCER, LHCER and SM. Lipid classes currently included in assay provide good coverage of lipids commonly found in mammalian plasma, tissues and cells. Additional lipids can be added to the assay depending on matrix as workflow is easily extensible. 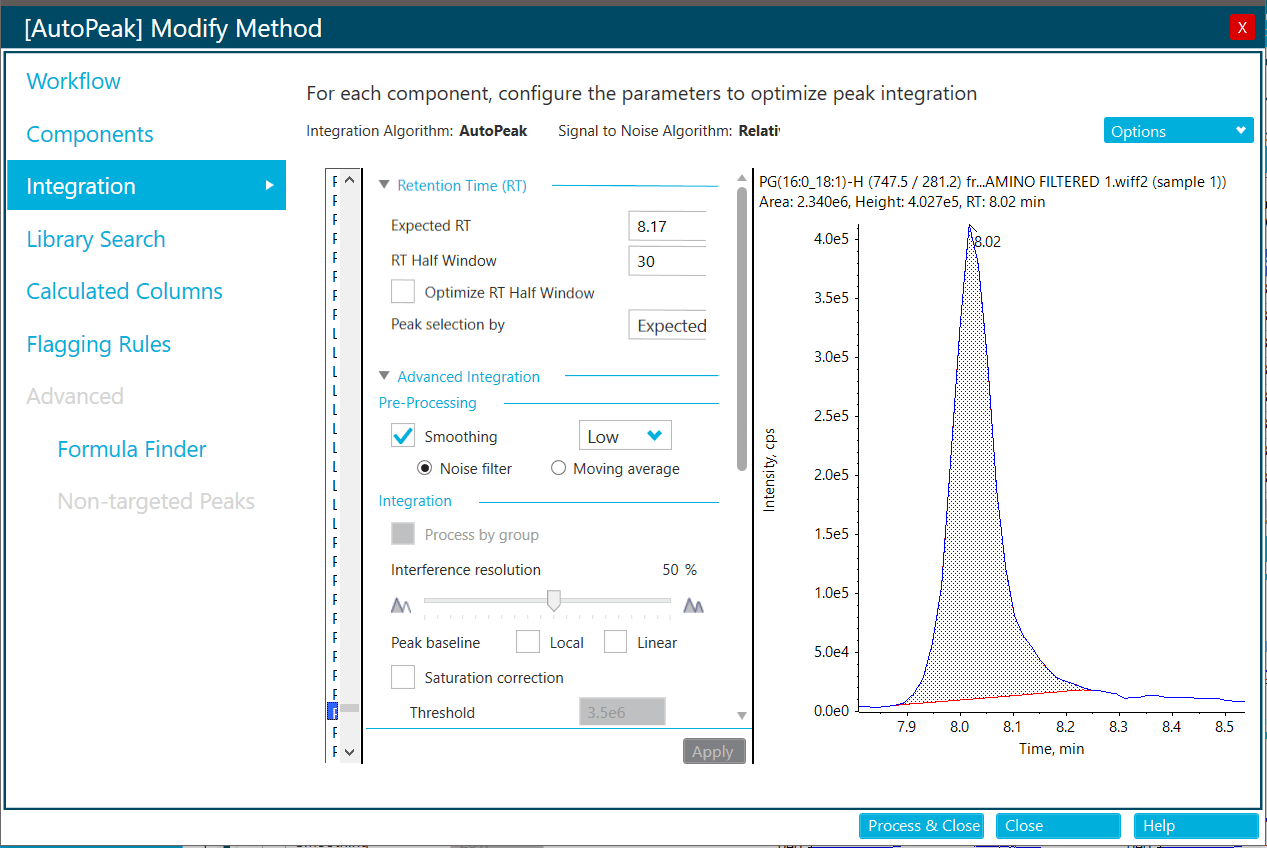 As the number of lipids covered in this method is large, it is important to use the Scheduled MRM Algorithm approach during acquisition of biological dataset for highest quality quantitation results. To streamline the development of this final assay, an Excel based sMRM Pro Builder8 has been developed to assist the user during the assay refinement steps.

First the user collects MRM data on a representative matrix (with or without internal standards) for the upcoming biological study (3-5 replicates). Results from the first pass unscheduled MRM acquisitions are processed with SCIEX OS Software (Figure 3) and then entered into the sMRM Pro Builder and an initial rough approximation of the retention times is determined. Next 5-10 replicate injections are performed on the matrix using a preliminary time scheduled MRM method, ideally a pooled sample from the biological samples to be run. Data analysis here provides information on peak width, RT variance, and lipid signal and the sMRM Pro Builder computes a final optimized Scheduled MRM Acquisition method (Figure 4).

After method construction, the Scheduled MRM Algorithm Concurrency tool9 for Analyst Software or the sMRM Summary build into SCIEX OS Software10 can be used to check the concurrency and hence resulting dwell time for the final assay. 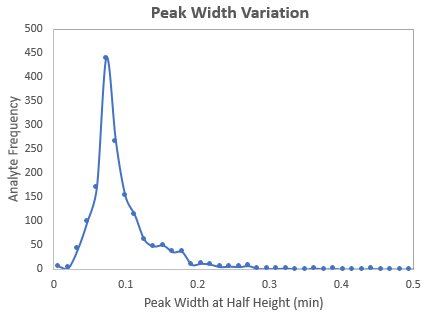 Figure 4. Optimization of Scheduled MRM Algorithm assay using sMRM Pro Builder Template.  To obtain better quality data, the assay can be optimized further using the advanced features in the Scheduled MRM Algorithm. Using the peak width and RT variance computed, an optimized MRM detection window can be included in assay for each lipid species. The types of enhancements improve the assay by maximizing dwell times while maintaining cycle time of the method. 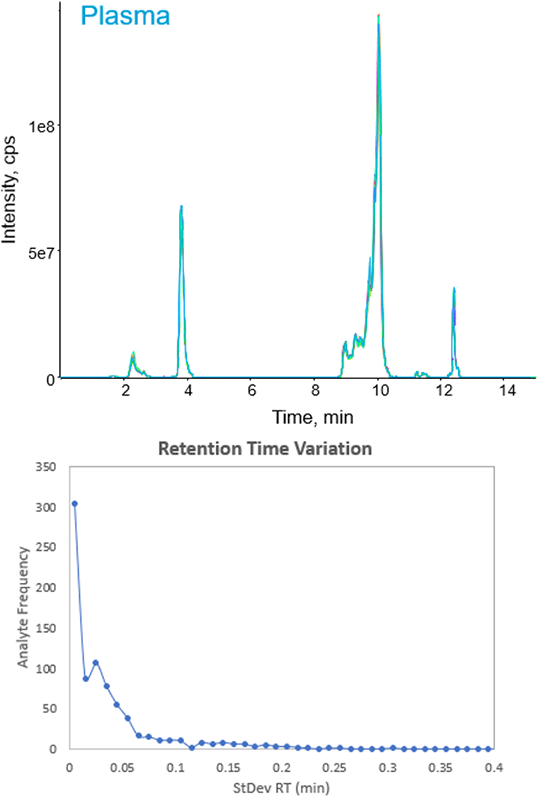 Using the optimized Scheduled MRM Algorithm acquisition method, 5 replicate injections were performed on plasma using the SCIEX Triple Quad™ 7500 System. Reproducibility of quantitation was assessed by computing the %CV of the peak area replicates for the lipids within each class. Figure 6 (middle) shows the cumulative fraction of lipids in selected classes at each % CV level for all lipids from the optimized method. Nine HCER lipids were measurable in plasma and HCER was the 5th most abundant class as measured by sum of peak areas (top) and showed highest reproducibility (middle). Other classes (SM, PC, CER, DCER, HCER and LPC) were also measured with very good reproducibility with 80% of lipids quantified with 20% CV or better. The TAGs are a large class (454 tested) but by filtering the assay to the 201 TAGs measurable in this sample, good reproducibility of this class was obtained (Figure 6 bottom).

Figure 6. Increased area reproducibility of assay using Scheduled MRM Pro Algorithm.  Rough composition of lipids in plasma was estimated by summing the peak areas of detected lipids in each class from NIST plasma (top). Peak area %CV were computed across the replicate injections and plotted for selected lipid classes, plotted as cumulative %CV plots (middle). During assay development, the assay was filtered for just the detectable lipid species in the sample based on test data. The TAG class is a very large class; by filtering out the undetectable TAGs, good data reproducibility were observed (bottom).

It is important to note that quantitation of lipids via global lipid profiling is challenging.  In this method, several options are available to quantitate lipid levels in samples.  For relative quantitation, a single lipid molecular species for each lipid class is needed.  This strategy corrects for extraction efficiency as well as systematic errors; however, this strategy should only be used for comparative analysis between two samples.  Using this strategy, it is not correct to report the concentrations of individual lipid molecular species, because the fragmentation efficiency of different molecular species within the same class is not equal and depends on the length and the number(s) of double bonds present in the fatty acid that fragments in the negative ion mode.  Using this strategy, it is possible to conclude certain lipids increase or decrease when two different samples are compared. SPLASH mix from Avanti Polar Lipids is a commercially available mixture of lipid internal standards that can be used for this quantitation strategy.

In this study, a targeted global lipid profiling strategy is presented that enables a broad array of different lipids to be quantified at the molecular species level (~1900 molecular species).  An optimized chromatography method was developed to minimize isobaric interference through the chromatographic separation of lipid class, which allows for a relatively rapid and specific lipid screening technique.  The target list of lipids is comprehensive, covering most major lipid classes and categories, and MRMs were selected to cover lipids containing fatty acids with 12-26 carbons and 0-6 double bonds including odd chain lipids.  The method is customizable, so new lipid categories, classes and molecular species can be added.

Results quality of the method has been demonstrated in plasma matrix to highlight both the robustness and the flexibility of the LC-MRM assay.

An easy to use tool (sMRM Pro Builder template) was also developed to streamline the optimization of the targeted MRM assay to maximize results quality when performing assay with very large numbers of time scheduled MRM transitions.