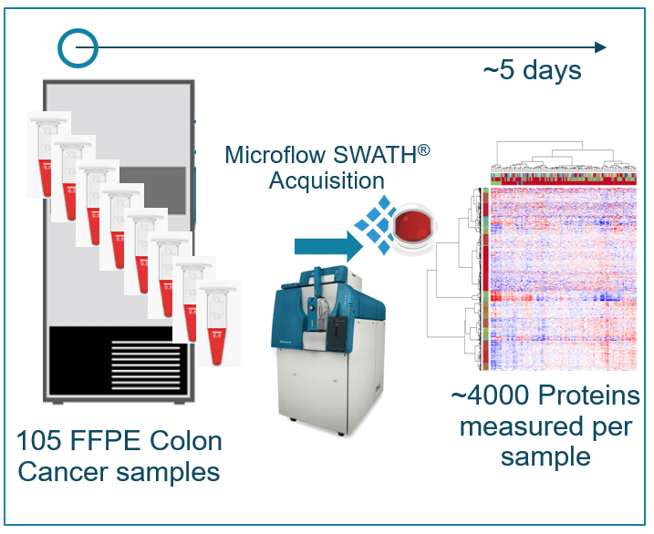 Tissue biopsies have been preserved and stored in biobanks for more than a century in the hope that their future analysis will provide a better understanding of health and disease. One of the most common methods of preserving these tissue samples is by formalin-fixed paraffin-embedded (FFPE). These samples are often very well characterized by classical pathological methods and provide great potential for precision medicine and the discovery of new diagnostic/stratification markers and therapeutic targets.

A powerful way to take advantage of this repository is to quantify large numbers of proteins across all the samples so that correlations can be made with respect to various health and disease states. Such an endeavor would require highly reproducible sample preparation, a robust analytical platform for high throughput sample analysis, as well as robust data analysis. Current LC-MS/MS proteomics tools now allow for the reproducible quantitation of 1,000s of proteins in a single run. In particular, SWATH® Acquisition has been shown to provide the very good data completeness, reproducibility, and quantitative precision in comparative studies.1 When coupled with microflow chromatography, sample throughput and assay robustness are improved while still maintaining similar overall workflow sensitivity to nanoflow separations.

Here, microflow SWATH Acquisition2 was used to generate quantitative proteomics data on a cohort of colon cancer samples from a biobank. This study demonstrates how high throughput proteomics can be used to interrogate these precious samples from biobanks and how this research can pave the way to a better understanding of health and disease. 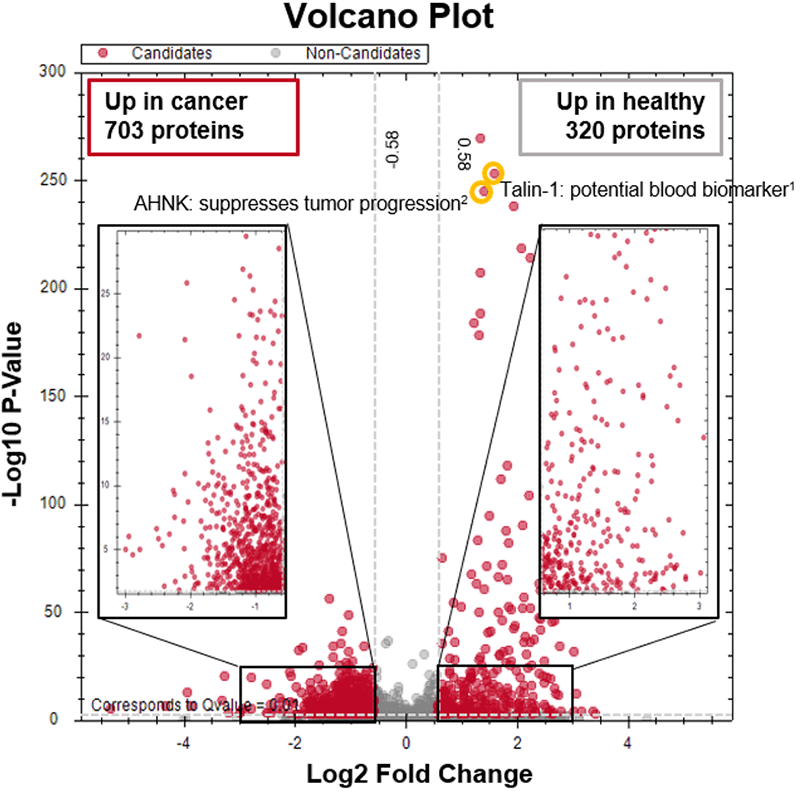 Sample preparation: The formalin fixed paraffin embedded (FFPE) colon tissue samples were ordered from a public repository. These samples were classified as healthy or disease according to clinically accepted protocols. Protein extraction and tryptic digestion of a 10 μm slice were performed using an adapted protocol3 and resulted on average in 140 μg of protein per slice. Prior to LC-MS analysis digests were spiked with iRT peptides (Biognosys) for retention time normalization. Six μg of protein digest was used per run.

Data processing: DDA data were searched against the human UniProt database using the Pulsar search engine (Biognosys) and a library was generated using 3-6 fragment ions per precursor. The library comprised 49,176 precursors, 44,807 peptides and 5,499 protein groups. This library was then used for data analysis of the SWATH Acquisition data in Spectronaut Pulsar (Biognosys) using default parameters. The analysis of the whole dataset took ~30 hours. All data were filtered by 1% FDR on precursor and protein level. Protein grouping was performed based on the ID picker algorithm. Data were normalized by local regression normalization. Statistical testing for differential protein abundance was done using the Spectronaut pipeline (t-test, multiple testing correction after Storey). 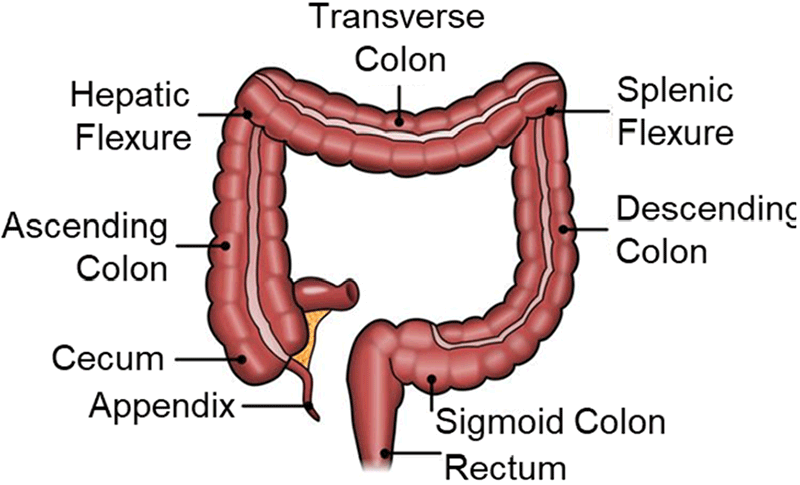 Colon and rectal cancers rank third in the USA with respect to the number of new cases and number of deaths per year4 with 1 out of 17 people developing colorectal cancer, highlighting the importance of performing biomarker research in this disease area. This current study was comprised of 105 FFPE tissue samples consisting of 95 cancer samples and 10 healthy samples from various resection sites of the colon (Figure 2). The sample preparation produced a high peptide yield without biases towards the colon region. On average, one slice yielded 140 μg of total protein with slightly lower yields for hepatic flexor and sigmoid region (Figure 3). Overall the sample preparation was highly reproducible with CV=~10%. 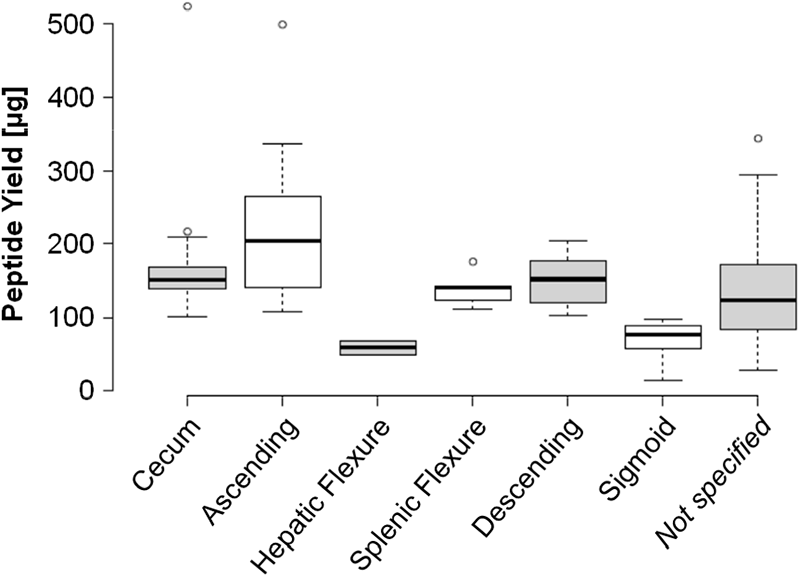 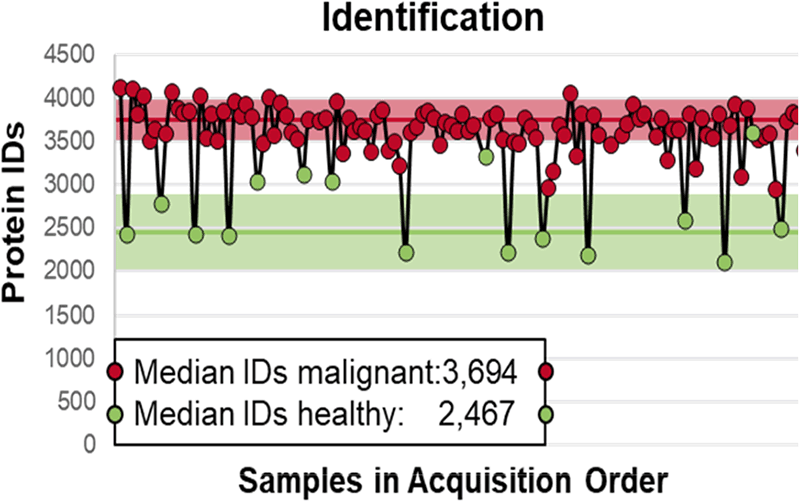 SWATH Acquisition uses a library for data analysis. In this study, the spectral library that was generated comprised 5,499 protein groups, 44,807 peptides and 49,176 precursors. As highlighted in Figure 4, the median number of protein groups quantified from the cancer samples was 3,644 proteins, and a median of 2,882 proteins in the healthy samples and remained constant across the entire sample set within 1 standard deviation as indicated by the colored areas. In total, 4,565 proteins groups were quantified in this sample set across the two sample types. 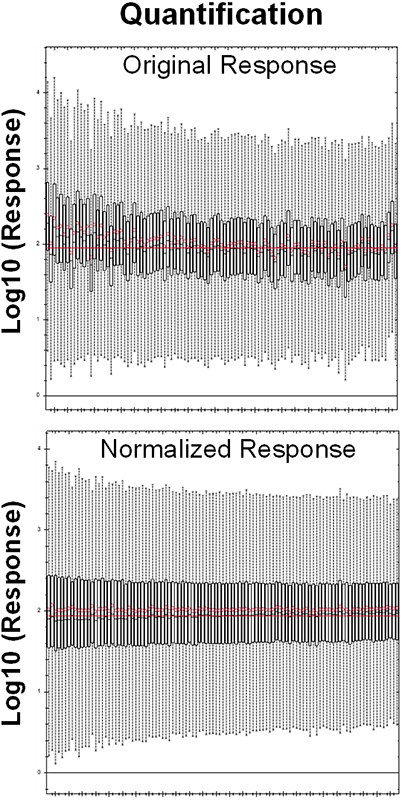 Figure 5. Normalization provides corrects for small signal changes across study. Over time, a slight decrease in overall intensity was observed (top). This was corrected for by normalization in Spectronaut software (bottom). 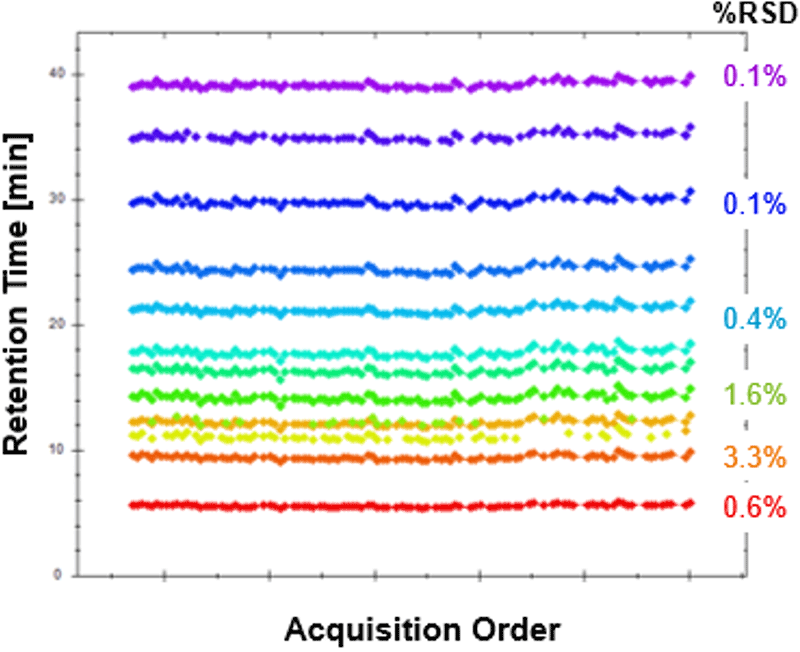 Many proteins are significantly altered between cancer and healthy tissues

Figure 1 shows a volcano plot of the data after a t-test for this quantitative dataset. The results revealed 1,023 proteins in a significantly altered abundance between the healthy and the cancer samples (Q value < 0.01, absolute log2 fold-change > 0.58). The majority of these significantly altered proteins (703) were found in an increased amount in the samples from the cancer tissue. 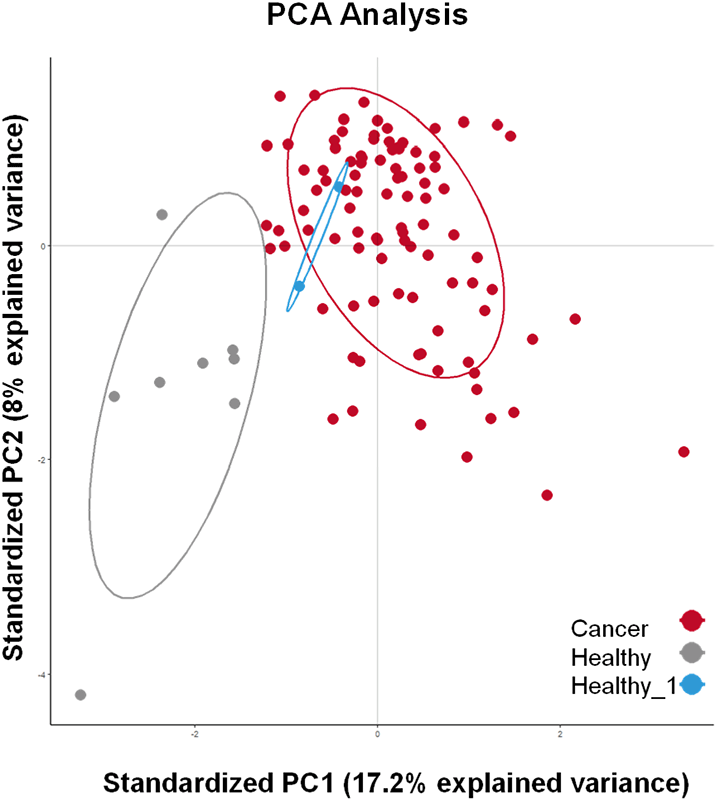 The PCA findings were supported by gene ontology analysis in Spectronaut in which proteins involved in translation initiation, translation and RNA metabolism were highly enriched in the cancer cohort (Figures 8 and 9). These findings demonstrated an increased protein synthesis capacity in the cancer cells compared to the healthy cells, which has been described as a key physiological task for cancer cells.4 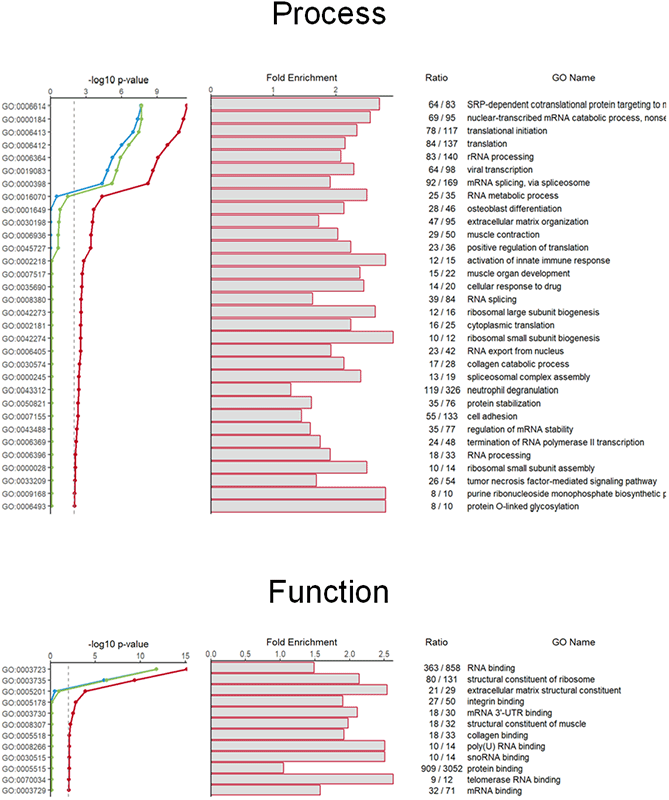 Figure 8.  Biological interpretation of the data – cancer vs healthy. Gene ontology analysis for both Process (top) and Function (bottom) for proteins with an increased abundance in the cancer cohort. Red line indicates the -log10 p-value and the green and blue lines indicate the p-values after multiple testing correction (green: Bonferroni, blue: Benjamini-Hochberg). 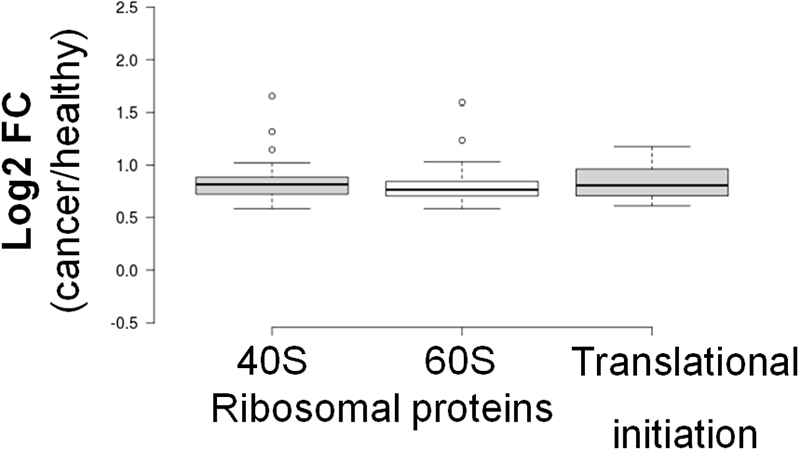 Proteomic profiles can be used to identify potential cancer subtypes

A cluster analysis was performed in order to find patterns in the data, and this revealed three cancer subtypes based on their proteome profiles (Figure 10). These potential sub-populations within the cancer cohort are labeled as proteomic subtype A, B and C. Healthy samples are clustered within the unboxed area to the left. Ribosomal proteins are boxed in red at the bottom of the plot and these show various levels of increasing abundance with respect to the healthy samples for all cancer sub-populations.

Another interesting protein cluster is labeled with a blue arrow. Expression levels were high in subtype A and healthy samples, but low in subtype B and C. This cluster primarily consisted of cell adhesion proteins which were previously shown to play a significant role in the metastatic potential of colon cancer.6

A previous colon cancer study showed that Hepatocyte Nuclear Factor 4-α (HNF4α) expression levels differ between subtypes.7 In this study, HNF4α was significantly higher in abundance in subtype B (Figure 11) indicating an HNF4α amplification in this tumor subtype. 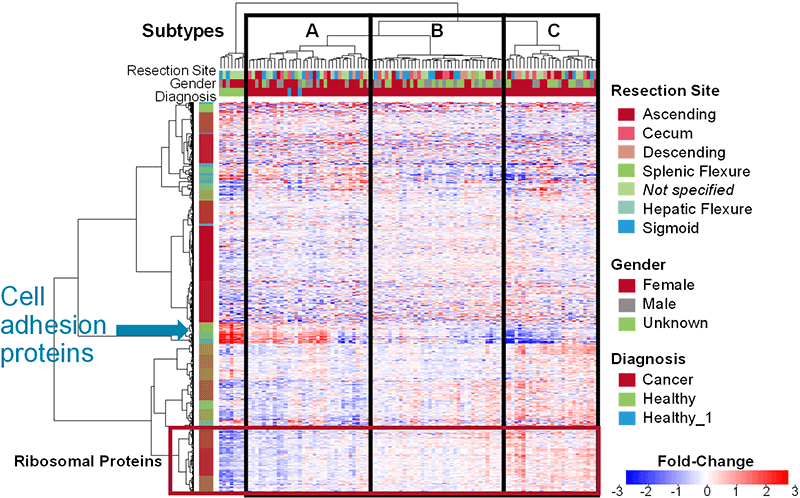 Figure 10. Proteomic cancer subtypes revealed by cluster analysis. Unsupervised clustering of protein fold changes against median abundance across all samples was performed and this revealed 3 proteomic subtypes A, B, C shown by black boxes. Clustered at the bottom of the plot are the ribosomal proteins which show increased expression relative to the healthy samples. Another interesting protein cluster is shown with blue arrow and consisted primarily of cell adhesion proteins. 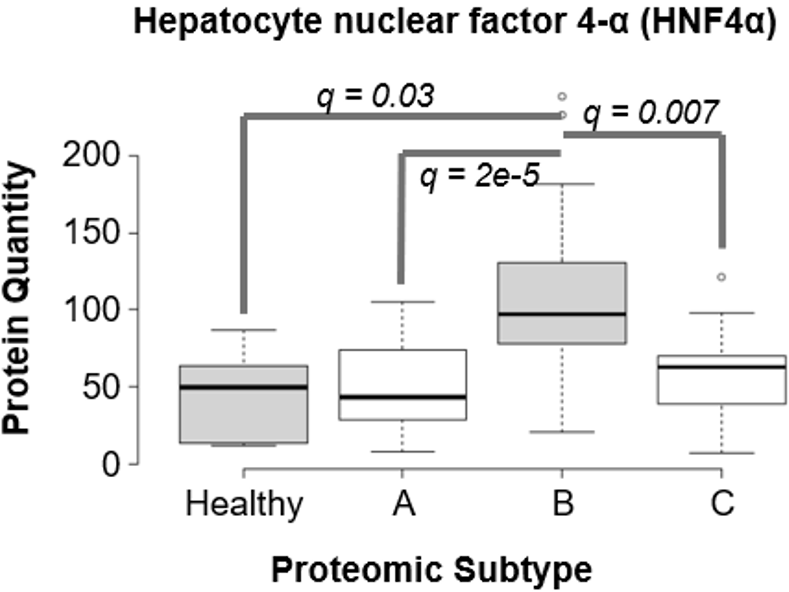 This study demonstrates how high throughput proteomics can be used to analyze large sample sets from tissue biobanks. Microflow SWATH Acquisition on TripleTOF 6600 System combined with Spectronaut data analysis generates data from these large resources in rapid fashion with high analytical depth. The proteomic analysis of large sample sets available in today’s biobanks will enable a better understanding of the molecular pathways behind health and disease and pave the way in the future for a better personalized treatment of cancer.