Using Skyline Software and the QTRAP® Systems with SelexION® Technology

Skyline software enables the determination and optimization of targeted MRM assays for triple quadrupole and QTRAP Systems, providing the ability to tune compound dependent parameters such as collision energy. Here an iterative approach to tuning the compound dependent Compensation Value (CoV), a SelexION Technology parameter, has been implemented in Skyline software, allowing for the easy, rapid optimizing of many peptide CoVs in a small number of LC-MS runs. The tuning of 100 to 150 peptides in a single optimization round has been demonstrated here. Differential mobility separation (DMS) on QTRAP Systems, known as SelexION Technology, can be used to separate peptides based on different chemical properties and can be useful in the separation of isobaric or isomeric compounds2. Use of DMS can improve the quantitation of peptides by reducing both specific confounding interferences as well as reducing the general background noise, simplifying peak integration. Each peptide of interest will have a unique compensation voltage (CoV) and therefore must be tuned like all compound dependent parameters on a mass spectrometer.

In this note, a new iterative tuning strategy is demonstrated for the semi-automated optimization of CoV values using Skyline software (Figure 1).

Figure 1. Strategy for iterative tuning of CoV. Three step on-column tuning strategy for large number of peptides simultaneously has been developed in Skyline Software. In the first injection, a rough tune is performed to determine the approximate CoV value for each peptide within the typical peptide CoV range. Using that value, a second injection is performed with CoV values in 1 V steps on either side of that first rough tune value, this provides a value to within 1 V from the optimum. A fine tune step is then performed with very small steps (0.2 V) to provide a final optimized CoV value for every peptide.

Figure 2.  Default settings for compensation voltage tuning. The default settings that control the number and size of the sets can be adjusted in the Edit Compensation Voltage Parameter window found in Transition Settings on the prediction tab.

Figure 3. Overall Skyline software workflow with CoV tuning. A screen capture of the Skyline workspace (left) highlights the multiple steps in performing the CoV optimization.  This visual shows how the rough, medium and then fine tune really hones in on the CoV optimum in a short number of steps.

Figure 4. Exporting methods and importing data. In Skyline, an acquisition method can be automatically created for the Analyst® Software (left) by selecting Compensation Voltage (under Optimizing), and which tuning step they wish to perform (Rough, Medium or Fine Tune). After the data is collected, it is loaded into Skyline (middle) again specifying CoV Optimization and which tuning step. The CoV with the maximum signal is determined for each peptide (right) and is then used as the center point for the next optimization iteration. Three rounds of optimization produce a highly optimized CoV and can be performed on ~100 peptides per run (when using Scheduled MRM™ Algorithm).

At each step of the iterative process, a specific MRM acquisition method is built using the standard method export process. When QTRAP System is selected and the Optimizing drop down menu is viewed, Compensation Voltage can be chosen (Figure 4, left). This selection creates a secondary selection option to choose which step in the iterative process is to be run (Rough tune, Medium tune or Fine tune). Select a template file that has been built with the appropriate source settings and the DMS device activated. This builds an MRM method using the most intense MRM per peptide and builds a series of MRM transitions with different CoV values. These steps can be controlled by adjusting the defaults (Figure 2). The method is then run in Analyst® Software on the QTRAP System with the DMS on.

Once the data is collected, it is imported back into Skyline software through the standard Import Results process (Figure 4, middle). Again, under Optimizing, the appropriate tuning step is chosen. As the data is imported, the MRM transition with the most signal intensity for each peptide is determined and the CoV value for that transition is selected as the optimum for that step.

This process is repeated up to three times to obtain a highly optimized CoV value for each peptide. This is a highly efficient process when using Scheduled MRM Algorithm as large numbers of peptides can be tuned simultaneously in just 3 LC-MS runs. After the tuning process is completed, all optimized values can be added to the Skyline Optimization Library (Figure 5). A user can create a new or add to an existing Optimization library, by selecting Optimization Library on the Prediction tab, under Settings ® Transition Settings (Figure 5). 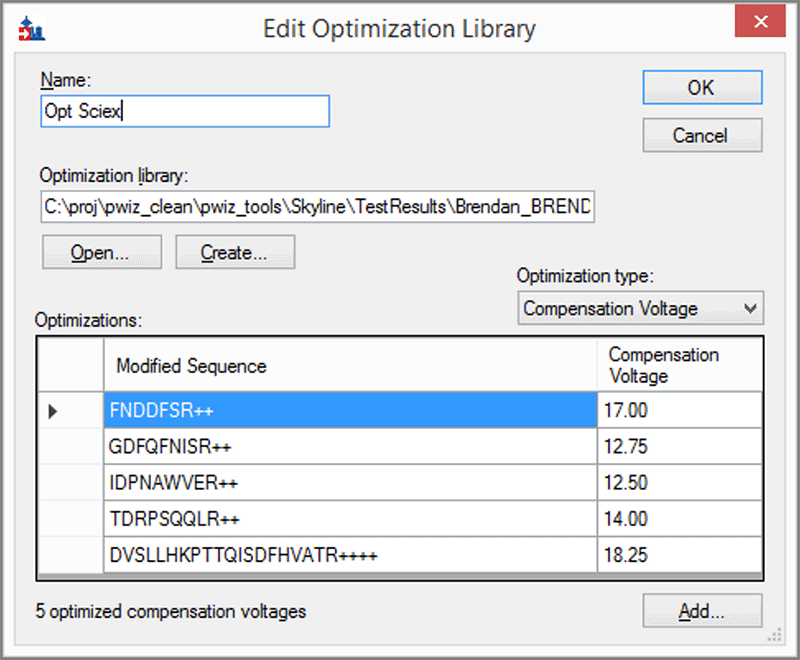 One key aspect of this on-column workflow is that this can be done in matrix without the need for tuning standards (synthetic peptides). A number of peptides per protein can be optimized and tested for performance before final selection and then heavy labeled synthetic peptides could then be obtained.

In this example, 88 peptides from 39 proteins were selected and taken through the entire process (Figure 6, top). This tuning process is fully compatible with other compound dependent parameter tuning steps that might be desired for assay optimization, such as collision energy optimization. The CE can be optimized either before or after CoV tuning.

After performing all tuning steps, the final optimized assay was exported and run on digested plasma, both with DMS on and with DMS in transparent mode. As expected, many peptides provided clean MRM transitions, highlighting the selectivity of MRM based assays. However, several peptides, that were critical for this assay, had interferences close in retention time to the correct peak (Figure 6, bottom left). These could often be removed by the DMS, as shown in Figure 6 (bottom right). 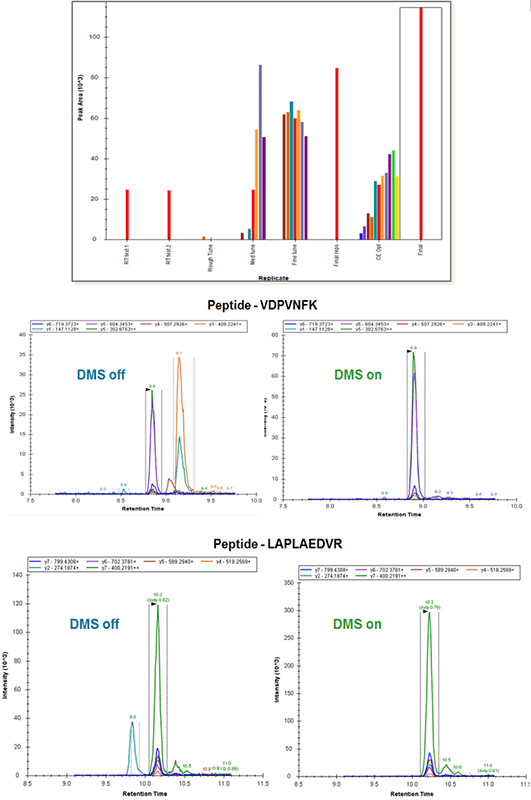 Differential Mobility Separation (DMS) using SelexION Technology on QTRAP Systems provides an orthogonal level of selectivity by separating components based on their chemical properties and mobility.