SWATH® Acquisition on the TripleTOF® Systems

Many drug metabolizing enzymes were quantitatively profiled in a single assay in many samples using SWATH Acquisition. As SWATH Acquisitionrequired little method development, it was easy to establish and provided comparable results to the MRM strategy. SWATH Acquisition is a data independent workflow, performed on TripleTOF® Systems, which is of great interest today as it provides a higher level of reproducibility and comprehensiveness in proteomics data1. In a SWATH Acquisition experiment, a wide Q1 isolation window is stepped through the precursor mass range, transmitting multiple analytes into the collision cell. The transmitted ions from each step are fragmented and a composite MS/MS spectrum is measured in the TOF MS Analyzer at high speed and high resolution. Post-acquisition, the peptides of interest are quantified by generating fragment ion extracted ion chromatograms (XICs) and measuring their peak areas.

For drug development, understanding the protein expression levels of drug metabolizing enzymes responsible for phase I and II bio-transformations (Figure 1) is a fundamental aspect of assessing drug-drug interactions, and evaluating drug safety and efficacy. Targeted quantitation using multiple-reaction-monitoring (MRM) has been used to quantitatively profile these enzymes in liver hepatocytes or microsomes. However, an MRM experiment normally focuses on a limited set of selected proteins for quantitation and requires significant upfront assay development work. In this work, the SWATH Acquisition method was used to analyze large numbers of proteins and multiple enzyme families involved in drug metabolism. 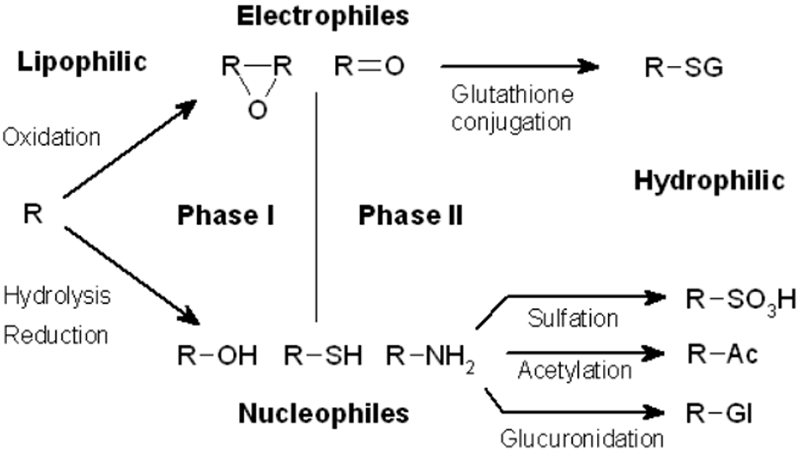 Figure 1. Phases of detoxification. Drug metabolism is the biochemical modification of xenobiotics or drugs using a specialized enzymatic system. These metabolic pathways modify the chemical structure of the foreign compounds to detoxify and prepare for excretion. Understanding the biological variation across individuals as well as the protein expression changes in response to drug is critical during drug discovery. © Wikipedia.

Sample preparation: Tissue cells (0.625 million) were resuspended in 1mL extraction buffer from ProteoExtract Native Membrane Protein Extraction Kit (EMD, Billerica, MA) with protease inhibitor. The cells were then lysed for 10 min at 4°C. The lysate was mixed with 250µL 100mM NH4HCO3 /3.6% DOC buffer and shaken for 20 minutes. Reduction agent (50µL of 100 mM DTT) was added and incubated for 10 min at 95 °C to disrupt disulfide bonds, followed by alkylation of free sulfhydryl groups with 50µL of 5mM iodoacetamide at room temperature in the dark for 30 min with continuous shaking. Extracted proteins were digested with trypsin (1:50) at 37 °C for 18 hrs. The digestion was stopped with addition of 0.2% formic acid/H2O solution, then vortexed and centrifuged at 10,000 g for 5 min. The supernatant was transferred to a new eppendorf tube and dried down in speed vacuum for 3hrs at 50°C.

Data processing: The pooled sample was analyzed with ProteinPilot™ Software to create a spectral library of proteins and peptides in the sample. The SWATH Acquisition data was processed using the SWATH Acquisition MicroApp in PeakView® Software. Only proteins that were identified at a 1% global FDR were used in SWATH Acquisition processing. Fragment ion XICs were summed to obtain peptide peak areas, and the areas for multiple peptides per protein were summed to obtain protein areas. Statistical analysis including principal component analysis (PCA) and t-tests were conducted with MarkerView™ Software. Data analysis of the MRM data was performed using MultiQuant™ Software. 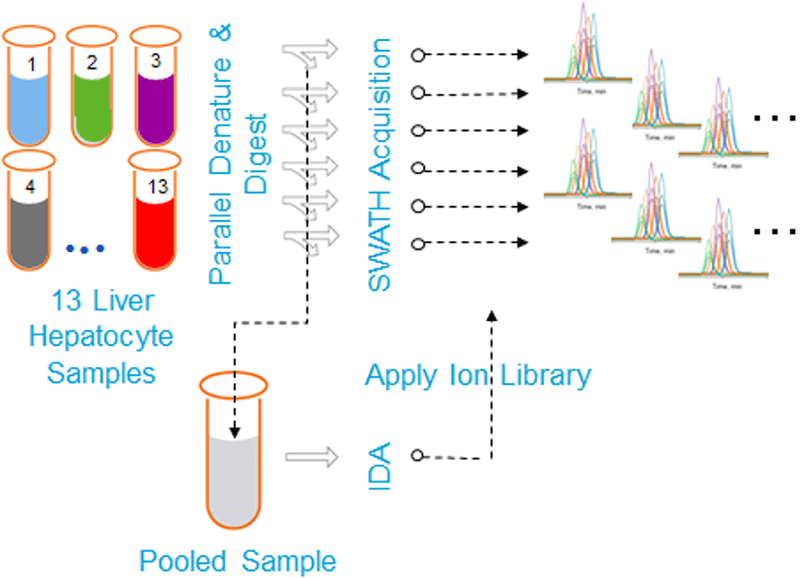 Figure 2. Experimental design. Protein extracts from thirteen liver samples were digested in parallel. The pooled sample was created and analyzed using an IDA experiment in order to generate a spectral ion library. The individual samples were analyzed in triplicate using SWATH Acquisition. Resulting data was then analyzed using targeted data extraction as guided by the ion library. 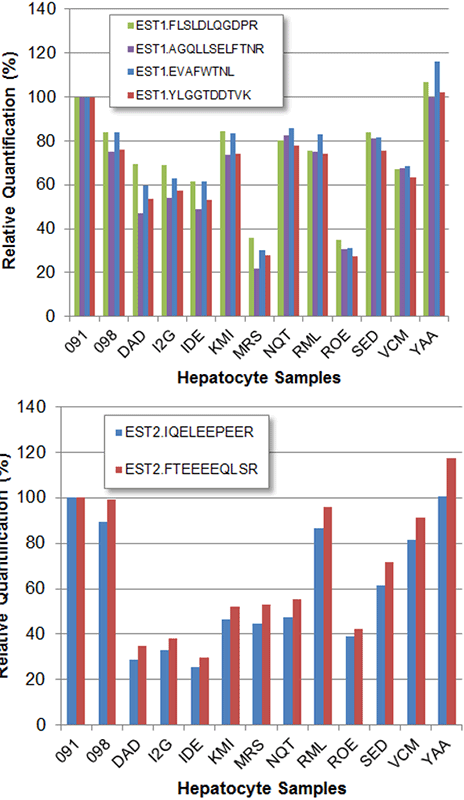 Figure 3. Reproducible quantitation of liver proteins. Quantitation for individual proteins of interest can be easily extracted from the SWATH Acquisition dataset. Shown here are two different esterases, EST1 - liver carboxylesterase 1 and EST2 - cocaine esterase. There is very good agreement between the multiple peptides per protein highlighting the reproducibility of quantitation.

The pooled sample was used to generate a spectral ion library containing more than 2000 proteins. From the SWATH Acquisition, an average of 1987 proteins was quantifiable across the 13 samples. Highly reproducible results were obtained for enzyme families of interest, such as 19 CYP proteins, 12 UGT proteins, and 7 GST proteins. The reproducibility was assessed across three technical replicates. The quantitative profiling of the key metabolizing enzymes potentially helps to discover the expression variations of these enzymes, as well as their correlation/anti-correlation properties across the sample set and ultimately within populations when larger sample sizes are available. This systematic understanding of protein expression is essential during the drug development process.

Figure 3 shows the relative comparison of the two phase II metabolism enzymes (liver carboxylase EST1 and EST2) across 13 samples. For comparison, the peptide signal was normalized against sample 091. A good correlation of quantitative differences was observed across multiple peptides of each of the two proteins, demonstrating that good reliability was observed in the SWATH Acquisition data.

Because of the comprehensive nature of SWATH Acquisition, it overcomes some common limitations existing in the MRM based targeted methods, such as limited multiplexing capabilities and the fact that only targeted analytes will be detected and quantified. Unlike a targeted method, SWATH Acquisition creates a permanent record of MS and MS/MS spectra of all detectable species in the sample, and all these information can be extracted from the data. In addition, the data can be further interrogated when more information arises and a researcher wants to ask more questions of the study.

Also because of the high information content of the technique, statistical analysis and visualization strategies are important. PCA analysis can provide one way of quickly detecting proteins that are differing between the samples. The scores plot (Figure 4, top left) shows how the samples are different from each other and the loadings plot (Figure 4, top right) shows which specific features are responsible for this difference. Proteins of interest can then be selected and viewed for their changes across the whole sample set (Figure 4, bottom). Here, the expression differences between two members of the Cytochrome P450 enzyme family are displayed. The protein expression of these two proteins track each other fairly closely across the samples except for a few individuals were differences are observed. 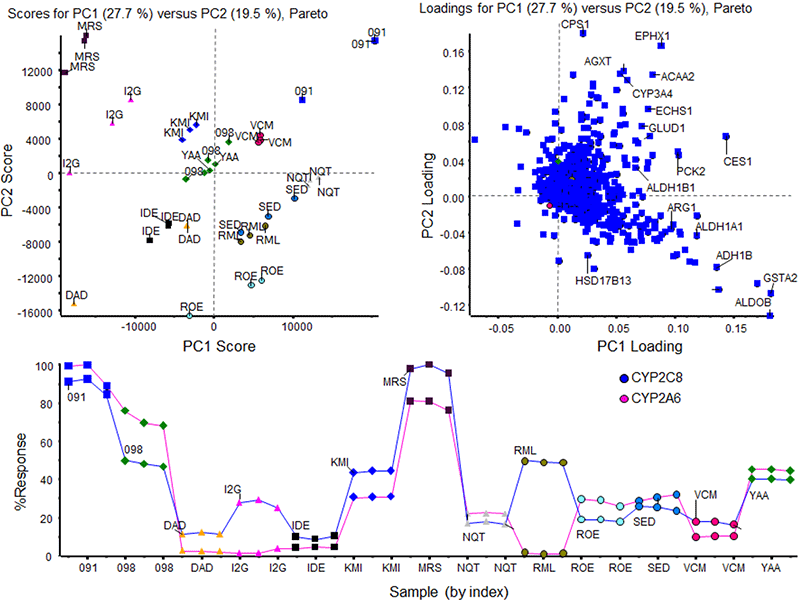 Figure 4. Analyzing global protein expression differences across the samples. After the data extraction was performed on the SWATH Acquisition data, the protein areas were loaded into MarkerView Software for statistical analysis. PCA was performed to obtain the Scores and Loadings plots (top) for easy visualization of the proteins that are showing the highest degree of change across the multiple samples. As an example, the protein expression differences across the different liver hepatocyte samples for the two cytochrome P450 proteins, CYP2C8 and CYP 2A6, are shown.

The quantitative profiles of the phase I and II enzymes are needed to facilitate drug development, understanding which proteins show higher or lower biological variation is important to understand and therefore a straightforward assay for measuring this is an advantage. Correlation as well as variation in protein expression can be easily assessed after PCA analysis (Figure 4). In the results, multiple proteins were found to be correlated, such as CYP3A4 and CYP3A5, which are two major phase I drug metabolizing enzymes in cytochrome P450 superfamily (Figure 5). As their sequence homology is very high, >80%, the quantitation from the SWATH acquisition data was performed using unique peptides to each protein isoform. Previously published data also demonstrated the positive correlation between these two proteins2. In addition, a higher correlation between UDP glucuronosyltransferases UGT2B7 and UGT2B15, and between CYP3A4 and UGT1A6 was observed (Figure 6, top left and right).

As PCA is a multivariate statistical analysis, the anti-correlation of proteins can also be discovered. Figure 6 (bottom left) displays an anti-correlated behavior between CYP3A4 and HSD17B13. At this moment, it is not clearly understood what biological events are behind this observation. But either anti-correlated or correlated behavior of inter- and intra- protein family isoforms may indicate their networking relations or metabolic activities.

In addition to the proteins discussed above, proteins were observed with minimum population variation. As shown in Figure 6 (bottom right), Glutathione S-transferase kappa1 (GSTK1) was consistently expressed across the 13 samples (with ~10% variation). These examples illustrate how much information is present within the SWATH Acquisition data for mining and also demonstrate how valuable the quantitative protein expression information is for the evaluation of drug biotransformation during the early drug development.

Figure 5. Specific quantitation of closely related protein isoforms. Three peptides that uniquely distinguish the closely related 3A4 and 3A5 CYP450 enzymes were summed to represent protein intensity. The absolute signal intensities were used to compare protein expression across the samples.

Figure 6. Visualize protein profiles for different expression behaviors. Using the PCA analysis in MarkerView Software, proteins that show similar correlated expression patterns as well as anti-correlated patterns can be readily found (Left). Using the pattern of CYP3A4 enzyme for comparison, the UGT1A6 enzyme was found to show a similar protein expression pattern while the HSD17B13 protein pattern was found to have a more opposite behavior to CYP3A4. On the right of the figure, two proteins UGT2B7 and UGT2B15 show very similar patterns to each other and also high variation across the individual samples. In contrast, the GSTK1 protein shows very minimal variation across individual samples.

After quantitative profiling with SWATH Acquisition during the early stages of research, MRM assays to proteins of interest can be quickly developed for better sensitivity and throughput.3 As the MRM strategy is the well accepted approach for this type of assay, it was of interest to compare the quantitative results. Skyline software was used to develop an MRM assay for a selected set of proteins and the assay was run on the same set of samples. Comparable results were observed between the MRM results generated with QTRAP® 6500 System and the SWATH Acquisition generated with the TripleTOF 5600+ System as illustrated by a selected peptide for the CYP1A2 protein (Figure 7). 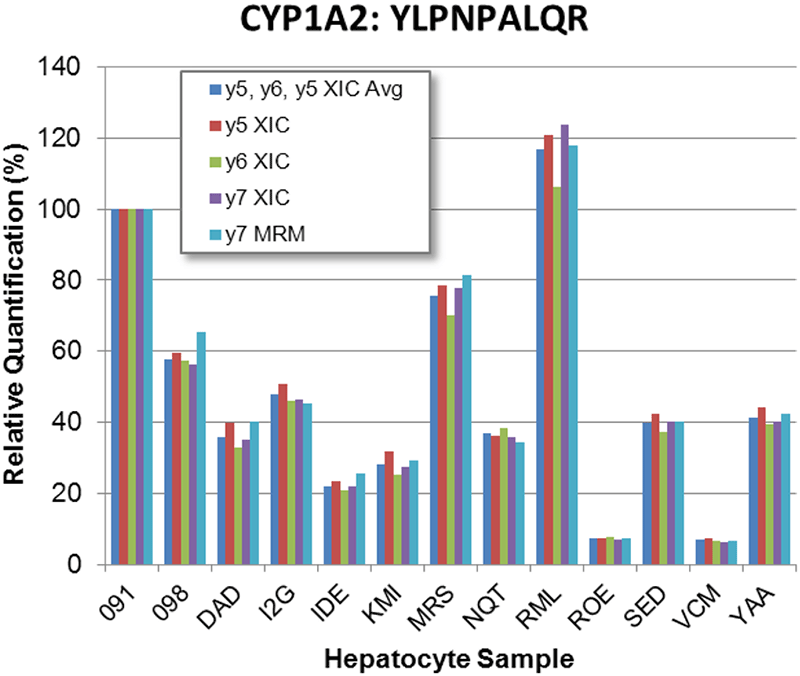 Figure 7. Comparable results obtained between SWATH Acquisition strategy and the industry standard MRM quantitation. A small subset of proteins was also quantified by MRM analysis on the QTRAP® 6500 System across the hepatocyte samples. To compare the quantitation between the two strategies, selected fragment ion data for YLPNPALQR, a tryptic peptide from CYP1A2, were plotted for both techniques. The bar height is normalized intensity of each transition against sample 091.Very good agreement was seen between the MRM data and the SWATH Acquisition data.

SWATH Acquisition provides a powerful acquisition strategy for the quantitative profiling of a large number of proteins key in the investigation of drug metabolism.