The SCIEX Triple Quad 7500 LC-MS/MS System - QTRAP Ready provides impressive levels of sensitivity, robustness and accuracy for trace level analysis of pesticide residues in food matrices. Here, over 1400 MRM transitions for 700 compounds were analyzed in a single analysis achieving quantification limits of 0.2 ng/mL for the majority of the pesticides tested.

The intensive use of pesticides in agriculture has led to the need for rigorous and extensive use of analytical technologies to ensure that there is no impact on human populations. Depending on the class of compounds, this has been primarily achieved through LC-MS/MS. Maximum residue limits (MRL) are set for regulated residues that define the highest level of a pesticide residue that is legally tolerated in food such that it is safe for consumers. Often these MRLs are set very low for some pesticides, to ensure highest safety, requiring very sensitive instrumentation to accurately quantify these compounds down to their MRL. Therefore LC-MS/MS solutions must be robust and sensitive to meet the needs of food testing labs.

In this method, over 700 compounds have been analyzed, covering required testing for numerous regions including Europe, North America and various areas within Asia. This breadth of coverage of pesticides has been achieved in part due to the increased sensitivity observed when utilizing the SCIEX Triple Quad 7500 LC-MS/MS System – QTRAP Ready relative to previous generation instruments.1 Improvements in both the generation of ions and the sampling of ions has resulted in significant sensitivity gains.2  For residue testing in food testing, this means that more analytes can be combined into a single analysis, complex matrices can be further diluted to reduce matrix effects, while still being able to achieve or exceed the necessary levels of sensitivity. 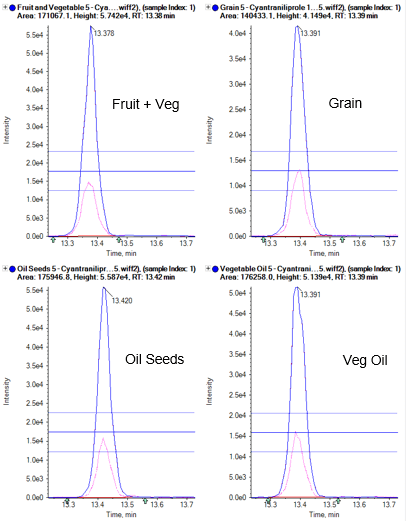 Sample preparation: Ten representative commodities were chosen according to SANTE/12682/2019—fruit and vegetables, grain, oil containing seeds, vegetable oil, spices, milk, eggs, meat, fish oil and fatty acids. Stock solutions were made that contained over 700 different pesticides. Samples were then prepared using the simple protocoldescribed in Supplementary information.3 In brief, 1 gram of food matrix was mixed well with 10 mL of water, then 10 mL of acetonitrile. QuEChERS salt was added and sample was vortexed for 10 mins. Sample was centrifuged for 10 mins, and then frozen. When ready to analyze, samples were thawed, centrifuged for 1 min and the supernatant was ready to inject. Calibration curves were constructed in various prepared food matrices by spiking in pesticides at concentrations of 0.2 to 20 ng/mL.

Figure 2. Advanced features in Scheduled MRM Algorithm. When analyzing very large numbers of analytes, the ability to highly optimize the assay can improve data quality. While Scheduled MRM Algorithm will automatically compute a maximized dwell time according to the MRM concurrency, this setting can be updated by the user to add more dwell time to low abundant analytes.

When performing a method with such a vast number of compounds it is important to ensure that the quality of the data is not compromised and that every compound can be effectively quantified. In this assay with over 1400 MRM transitions to analyze, time scheduling of MRMs was key to develop a method that was fast, comprehensive and maintained high quantitative quality. First retention times for each compound were determined, then a final optimized method was built using the Scheduled MRM Algorithm (Figure 2 and 3).

In addition to time scheduling of data acquisition, the ability to rapidly switch between positive and negative ionization modes is key for broad compound coverage in a single method. Fast polarity switching time is critical to ensure good data sampling rates are obtained across the LC peaks for accurate quantification of analyte signals. Data sampling is shown for 6 compounds to highlight data quality (Figure 4).

This allows for a broad range of compounds to be analyzed in a single method, providing both efficiency in data acquisition as well as data processing and reporting. Quantifier and qualifier transitions are also shown, again highlighting data quality (Figure 5). 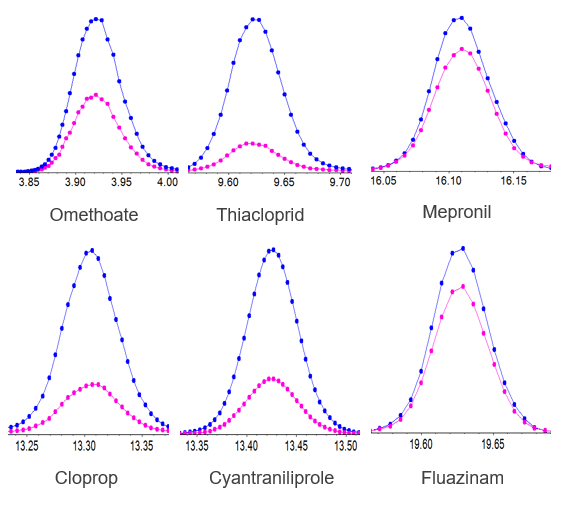 Figure 4. Importance of fast data sampling. Speed of analysis is illustrated by showing the number of data points achieved across the LC peak for three compounds analyzed in positive ionization mode (top) and negative ionization mode (bottom). This is made possible by both the Scheduled MRM Algorithm and the fast polarity switching of the SCIEX 7500 System. 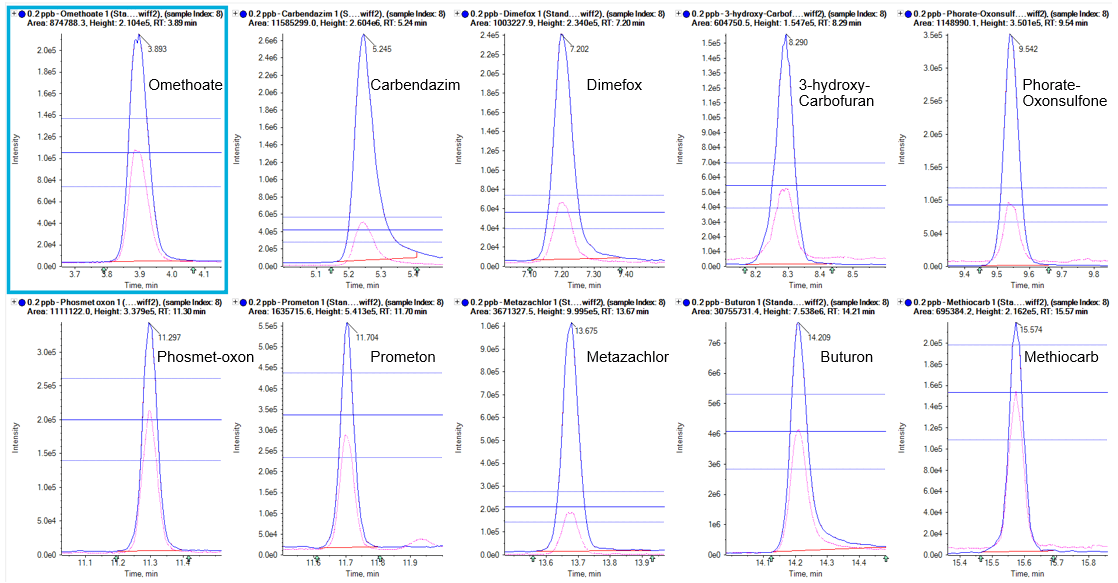 Figure 5. Chromatography of 10 selected compounds. Here both quantifier and qualifier MRM transitions for 10 compounds in solvent are overlaid for data obtained at the LLOQ of 0.2 ng/mL. Ion ratios are displayed showing the tolerance limits. Data for omethoate, carbendazim, dimefox, 3-hydroxy-carbofuran and phorate-oxonsulfone is shown (top row). Data for phosmet oxon, prometon, metazachlor, buturon, and methiocarb is shown (bottom row).

Carryover and interference are common problems observed in many analytical methods and should be characterized to ensure assay fidelity. Examples of clean blanks observed at the LLOQ (0.2 ng/mL) are shown in Figures 6 and 7. 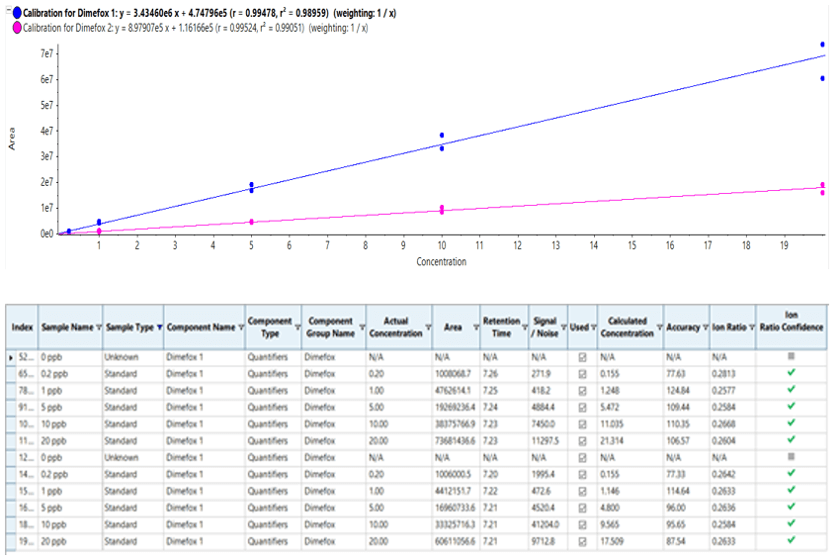 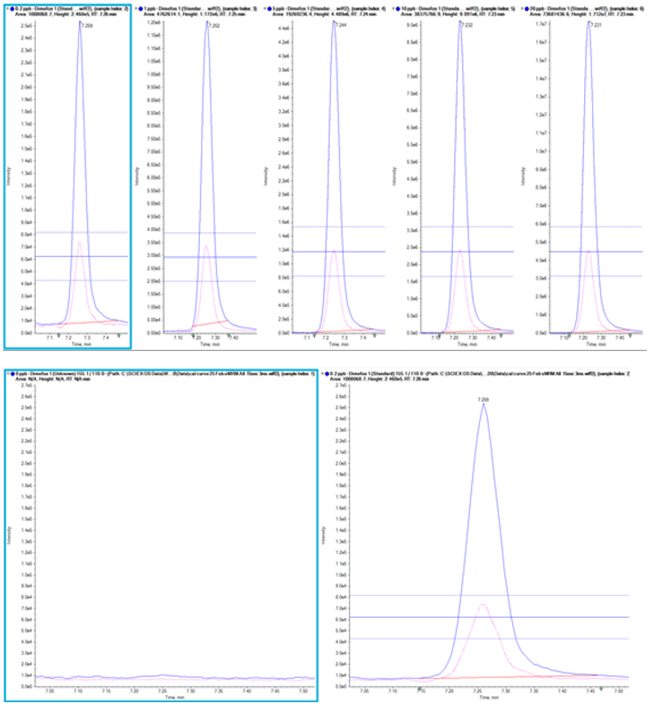 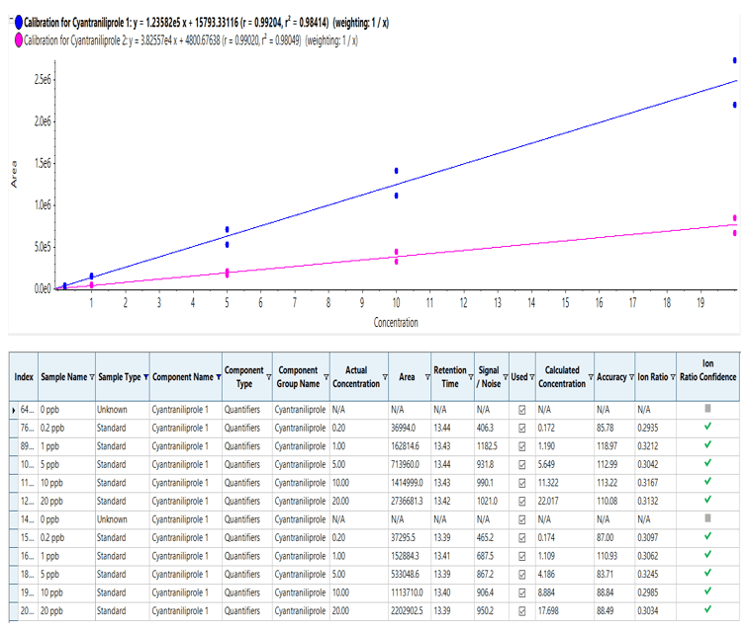 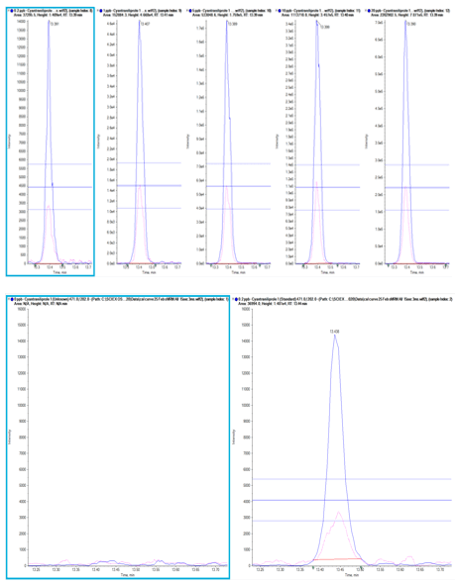 Next, the pesticide mixture was spiked into the prepared food matrices to evaluate sensitivity in real matrices. Monitoring two MRM transitions per analyte, both the quantifier and qualifier ions, provides added confidence in the detection of specific analytes in these complex matrices. Ion ratios were also computed and easily tracked throughout the study using the results table.

Examples of two pesticides (dimefox and cyantraniliprole) are shown across the 10 matrices to illustrate the data quality. All ion ratios were found to stay within the specified tolerances within each of the 10 matrices analyzed (Figure 8 and 9) highlighting the power of the SCIEX 7500 System for high sensitivity residue testing in food matrices. 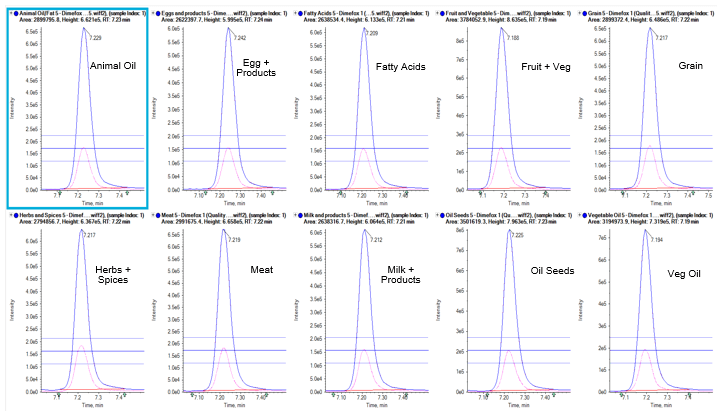 Figure 8. Quantification of dimefox in different food matrices. Representative spectra for dimefox (positive ionization) within each tested matrix, at the LLOQ of 5 µg/kg. 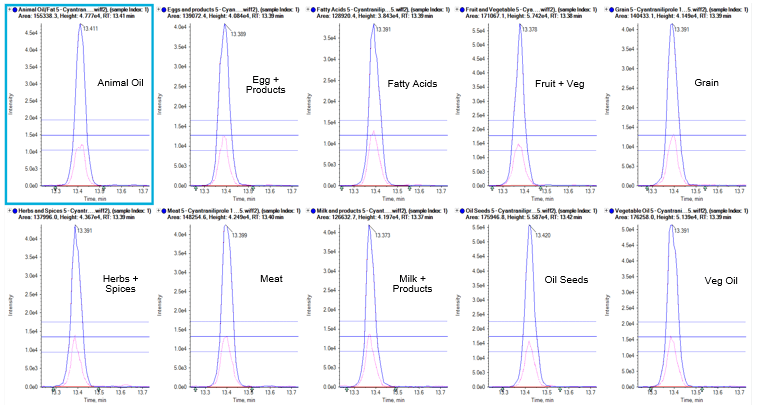 Figure 9. Quantification of cyantraniliprole in different food matrices. Representative spectra for cyantraniliprole (negative ionization) within each tested matrix, at the LLOQ of 5 µg/kg.

To determine the method robustness, a long batch with the representative matrices was run. The peak areas and ion ratios were tracked for the QC samples (Figure 10) and showed excellent reproducibility.

Figure 10. Batch reproducibility. A long batch was established to run the different food matrices and repeated 3 consecutive times (3.75 days, 90 hours of acquisition). The peak areas and ion ratios were tracked across the batch and show good reproducibility across the batch, highlighting the robustness of the method.

To summarize, the SCIEX Triple Quad 7500 LC-MS/MS System - QTRAP Ready provides impressive levels of sensitivity, robustness and accuracy for trace level analysis of pesticide residues in food matrices. In this study, over 1400 MRM transitions for 700 compounds were analyzed in a single analysis, utilizing the fast polarity switching functionality and the powerful Scheduled MRM Algorithm. Multiple MRMs per analyte also enabled ion ratio monitoring to ensure confident detection. Quantification limits of 0.2 ng/mL were observed for the majority of the pesticides tested. Extended batch analysis demonstrated the robustness of the method for the analysis of pesticides in complex food matrices.